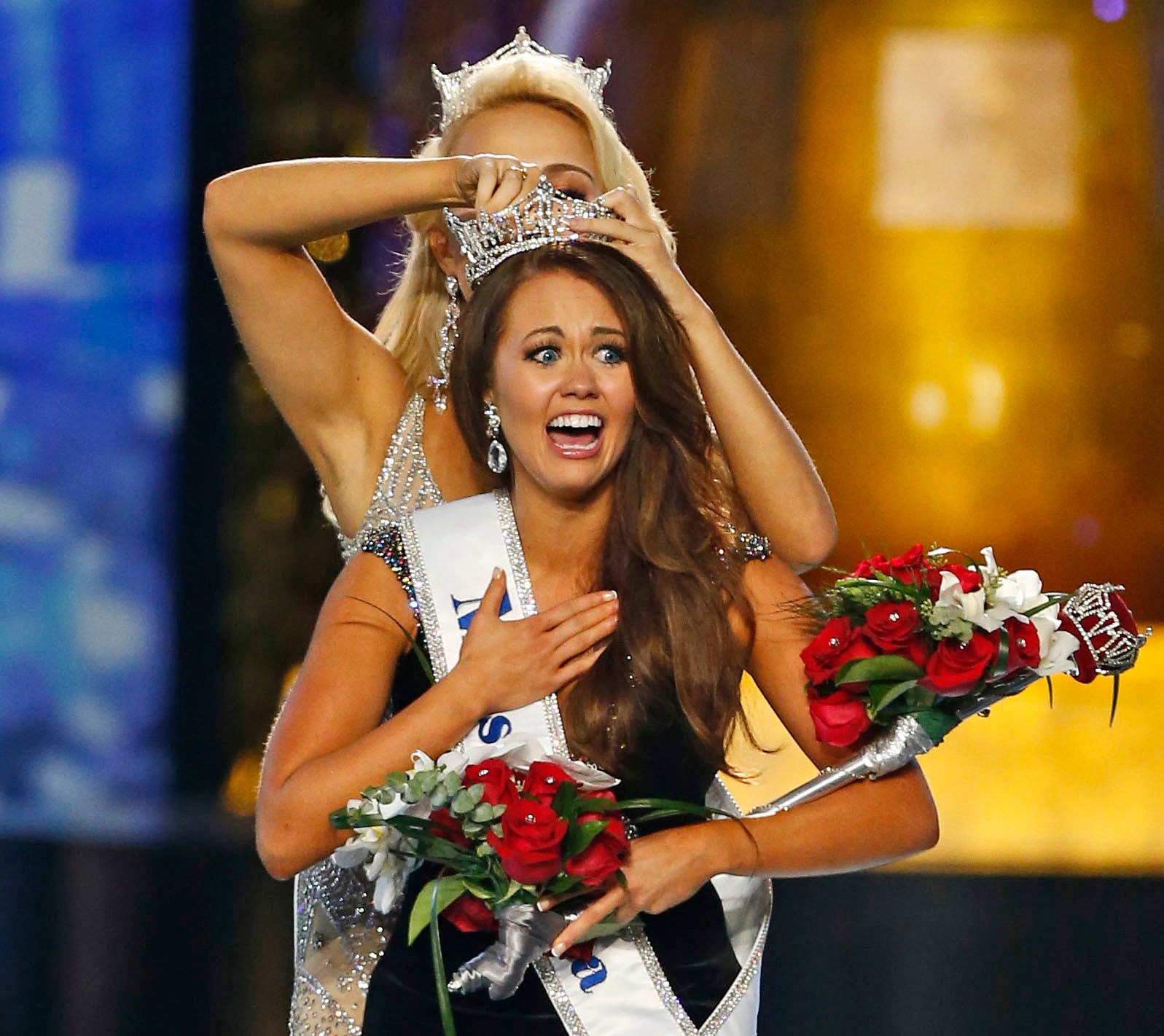 FILE – In this Sept. 10, 2017, file photo, Miss North Dakota Cara Mund reacts after being named Miss America during the Miss America 2018 pageant in Atlantic City, N.J. In a letter sent to former Miss Americas on Friday, Aug. 17, 2018, Mund says she has been bullied, manipulated and silenced by the pageant's current leadership, including chairwoman Gretchen Carlson. (AP Photo/Noah K. Murray, File)

ATLANTIC CITY, New Jersey — The reigning Miss America says she has been bullied, manipulated and silenced by the pageant’s current leadership, including Gretchen Carlson.

In a letter sent Friday to former Miss Americas, Cara Mund says she decided to speak out despite the risk of punishment.

Her letter is reminiscent of the movie “Mean Girls,” in which characters Gretchen and Regina bully the heroine and make her life miserable. That’s what happened to her in real life, Mund wrote. Gretchen Carlson is chairwoman of the Miss America Organization; Regina Hopper is its CEO.

Her letter exponentially increased the turmoil surrounding the pageant three weeks before the next Miss America is to be crowned in Atlantic City.

“Let me be blunt: I strongly believe that my voice is not heard nor wanted by our current leadership; nor do they have any interest in knowing who I am and how my experiences relate to positioning the organization for the future,” Mund wrote. “Our chair and CEO have systematically silenced me, reduced me, marginalized me, and essentially erased me in my role as Miss America in subtle and not-so-subtle ways on a daily basis. After a while, the patterns have clearly emerged, and the sheer accumulation of the disrespect, passive-aggressive behavior, belittlement, and outright exclusion has taken a serious toll.”

The Miss America Organization said it would reach out to her directly to address her concerns.

“The Miss America Organization supports Cara,” the group said in a statement. “It is disappointing that she chose to air her grievances publicly, not privately. Her letter contains mischaracterizations and many unfounded accusations.”

Mund said she’s been left out of interviews, not invited to meetings and called by the wrong name. When she obliquely hinted at trouble with pageant leadership in an interview earlier this month with The Press of Atlantic City, Mund said she was swiftly punished by having her televised farewell speech cut to 30 seconds, and was told a dress she had been approved to wear in the traditional “show us your shoes” parade cannot be worn.

This year’s competition will not include swimsuits, and pageant officials from at least 19 states have called for the current leadership to resign.

“Right away, the new leadership delivered an important message: There will be only one Miss America at a time, and she isn’t me,” Mund wrote.

Mund, who was Miss North Dakota and won the crown on a platform of increasing the number of women elected to political office, said she was treated better by the previous Miss America leadership that was forced from power after sending emails ridiculing the appearance, intellect and sex lives of former Miss Americas.

She cites examples of mistreatment including being excluded from the nationally televised announcement that swimsuits were being eliminated — even though she was with Carlson at the TV studio where it was made. She says pageant handlers ridiculed her clothing choices and chided her for wearing the same outfits too often. When she reached out to former Miss Americas to see if they had been treated similarly, “I was reprimanded by Regina who told me that problems and concerns had to be kept ‘in the family.’ “