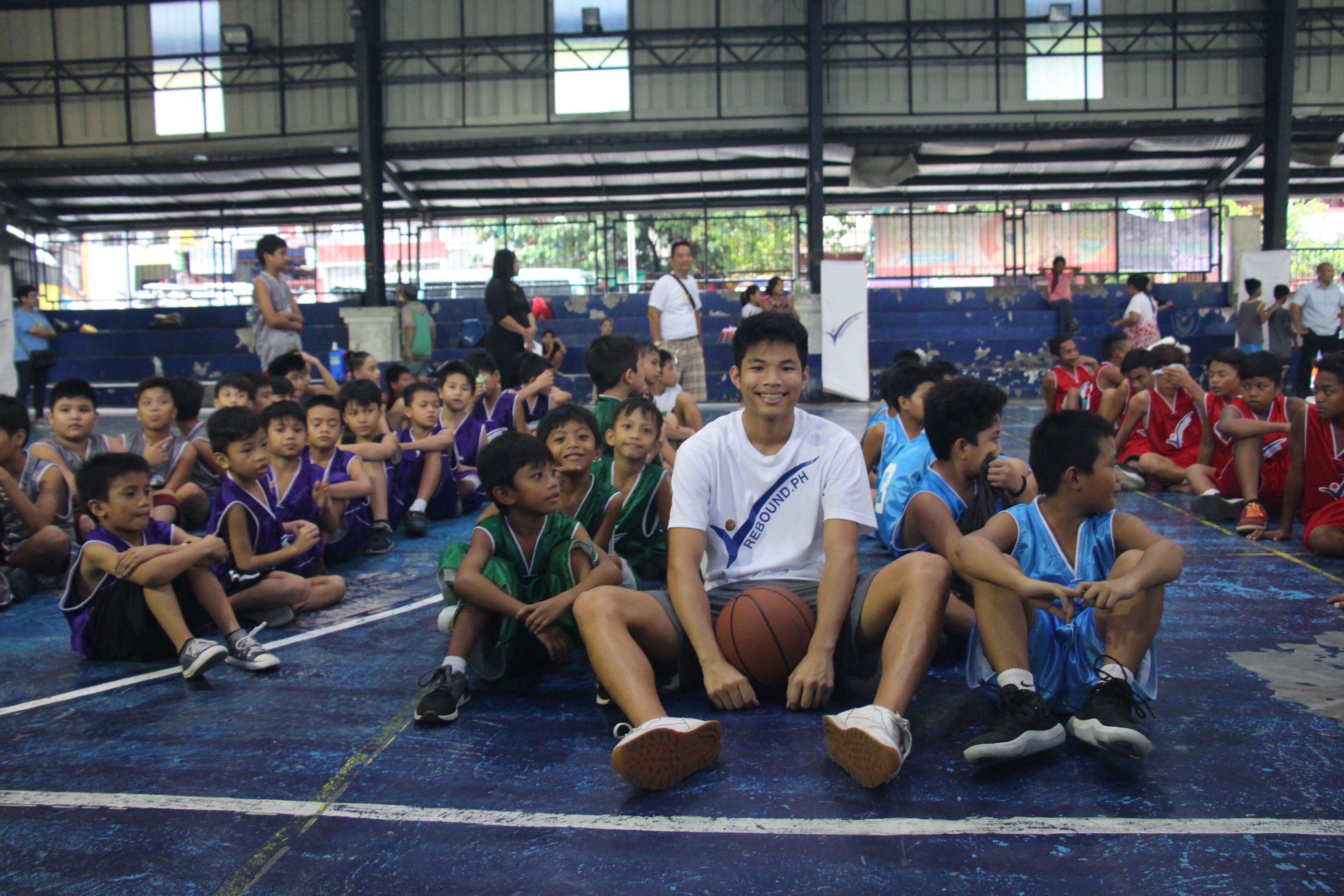 Martin Alindogan and the teams at rebound.ph’s first anniversary. “I learned a lot about myself,” he says.

“I like them equally but I think I’m better at basketball,” he says when asked which sport he prefers. “But I think it was good for me to play golf because it’s mentally tough. It’s also an individual sport so you only rely on yourself to do well.”

As good as he is, Alindogan appears more inclined to use his gift for sports to uplift others. In June 2017, he founded Rebound Philippines (rebound.ph), a camp that brings basketball to disadvantaged kids around the country.

To celebrate its first anniversary, rebound.ph gathered teams from the different locations it served for a mini-tournament in Barangay Escopa, Project 4, Quezon City. For the kids, it was the perfect opportunity to showcase their skills and demonstrate sportsmanship, teamwork and camaraderie.

The event ended with medals awarded to the Mythical Five players. Basketballs and goodie bags were also handed to each of the participants.

“I wanted them to have an outlet through sports, and giving them a basketball gives them an incentive to practice and stay away from harmful things,” says Alindogan.

If basketball has been a part of his life for as long as he can remember, so has volunteerism. The younger of two kids (his 20-year-old sister Maxine studies in the United States) of business executive Noji Alindogan and National Book Store Foundation head Trina Licauco, he helped set up libraries in local schools and packed notebooks and pencils in kits for the foundation’s Project Aral program.

At some point, Alindogan felt that his efforts were not enough. He wanted to meet and interact with the people he was helping. That’s when he thought of teaching basketball.

Though he had previous coaching experience helping train ISM first graders, the idea of organizing his own basketball camp and taking it to various communities presented challenges.

To purchase balls and other equipment needed for the camp, he resorted to creative forms of fund-raising. He sold photos snapped from a trip to Africa (his great-grandmother, National Book Store founder Socorro Ramos, purchased a picture in a show of support) and earned a percentage from the sales of sneakers he sold for a hardcore sneaker collector.

The biggest hurdle he had to overcome? “The language barrier,” he admits sheepishly. “I know what to do but saying it in Filipino so the kids can understand and listen was the hardest part. But I think I’ve improved.”

Earlier attempts at interacting with the players were awkward. The boys were timid while the girls thought the tall, dusky-skinned teenager was a celebrity and wanted a selfie with him.

“You just have to crack their shell,” he says. “I’m shy myself but I try to be as friendly as I can.”

While rebound.ph has helped youth improve their basketball skills, build friendships among their peers and develop confidence, the camp has done much for its founder, too.

He has also participated twice in his school’s International Community Actively Responding to the Environment (ICARE) program, rendering a week of service to less-fortunate communities.

Of rebound.ph, he looks forward to extending the camp to other parts of the Philippines and even expanding its offerings.

Noting the variety of improvised basketball hoops in the streets—like the rim of a market basket nailed to an electric post—he hopes to provide communities with proper equipment to better enjoy the game.

“I learned a lot about myself,” says Alindogan about his year running rebound.ph. “Serving others is something I enjoy.”