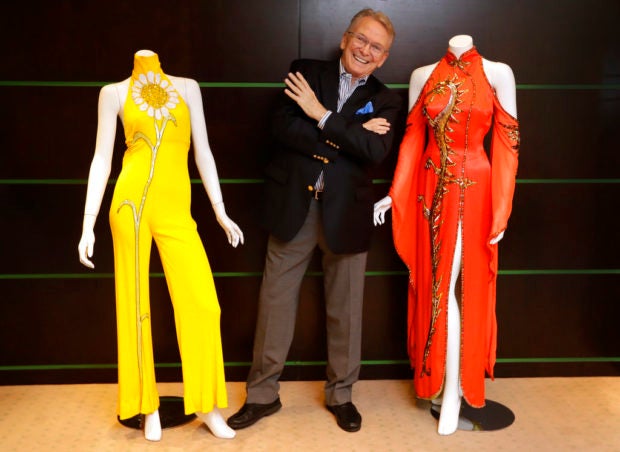 Fashion and Costume Designer Bob Mackie poses with two of his iconic designs, a scarlet red satin gown worn by Cher in 1975, right, and a marigold jersey jumpsuit worn by Cher between 1971-1976, left, in London, Thursday, Aug. 16, 2018. The gowns are estimated at 3,000-5,000 US Dollars ( 2,363-3,938 UK Pounds) each will be auctioned in the 'Property from the Collection of Bob Mackie' sale by Julien's Auctions in Los Angeles on Nov. 17. (AP Photo/Kirsty Wigglesworth)

LONDON — Bob Mackie-designed outfits worn by Cher, Carol Burnett, Diana Ross and other celebrities are going up for auction.

Nine-time Emmy Award winner Mackie designed the wardrobe for “The Carol Burnett Show” and has been creating outrageous outfits for Cher for decades.

The sale includes a marigold jumpsuit worn by Cher on “The Sonny and Cher Comedy Hour” and a scarlet satin gown from the “Cher” show. There are also dresses won by Lauren Bacall, Raquel Welch and other celebrities.

Mackie says, when designing for stars, “I always try to enhance the image that they already have.”

“You don’t try to change anybody, you just try to make them look better than ever,” he told The Associated Press on Thursday.

Mackie still works with Cher, 51 years after they first met. He says that “even at her most naked, she never looked vulgar.”

The 79-year-old American designer says he doesn’t mind getting rid of some of his creations.

“They can’t throw them in the casket when I go down,” he said. “What am I going to do with all this stuff? So why not let people enjoy them?”

Mackie and the collection are sailing from Britain to New York aboard the Queen Mary 2 starting Sunday. Julien’s Auctions will hold the sale Nov. 17 in Los Angeles and online. MKH

Silver and white shine in this year’s Met Gala