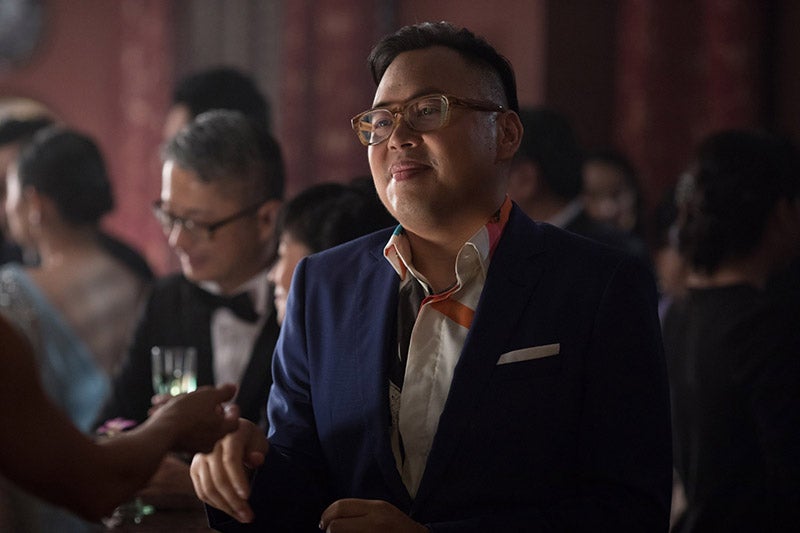 Nico Santos is still pinching himself

“Honestly, I have to pinch myself every time I see a poster or a trailer,” said actor Nico Santos, who plays Oliver T’Sien in “Crazy Rich Asians.”

Nico, who stars as sales associate Mateo Liwanag in the NBC series “Superstore,” was born and raised in Manila and moved to the United States when he was 16. “Never in a million years would I have imagined that this is how my life would have ended up. I just thought I would be living in the States, doing a regular job. The fact that I have this amazing career, that I’m a part of a movie that is so significant and is such a cultural marker is just huge.”

He may have spent over half his life living in the United States but Nico says he’s still very Filipino. “I’m so Filipino. I’m fluent in Filipino. Marunong akong mag-Tagalog,” he said in a phone interview with Super. “Honestly, what I miss the most beside the people and my friends and my family? I miss the food. I miss Philippine mangoes, you just can’t get them here. Mangoes, you can’t get lanzones here, you can’t get siniguelas, all these fruits that I grew up with.”

It was a friend who first told Nico about film adaptation of Kevin Kwan’s bestseller. “She was meeting with the director and she was like, ‘Have you heard of this book, ‘Crazy Rich Asians?’ They’re making a movie out of it and there’s a part named Oliver that is perfect for you.’”

Curious, Nico picked up a copy of “Crazy Rich Asians” and “devoured it in two days.” And when he read about Oliver, he said, “That part where they were describing Oliver, Oliver’s in his mid-30s, he wears glasses, he’s gay… I was like, I have to play this part. I have to have to have to. I called my agents and I bugged them, ‘Get me an audition.’”

Two months later, he bagged the role. “A week later, I was on a plane to Malaysia.”

Nico made the perfect Oliver—mischievous, smart, funny, sometimes snarky, with the panache for delivering zingers. (In one scene, he told a girl that what she was wearing made her look like “a clown’s tampon.”)

Kevin Kwan agrees. He told us in an interview last year, “Nico is brilliant. I think people are going to be so proud of him, Filipinos especially. He had me cracking up. He was so funny and so brilliant and he did a lot of improvising and had me on the floor, rolling, crying, in tears from laughter from how great he was.”

Nico was no stranger to crazy rich Asians, witnessing them in action when he worked at a high-end boutique in San Francisco. And his similarities to Oliver, who describes himself in the film as “the rainbow sheep of the family,” go beyond skin deep. “Me and Oliver, we both love pretty things. That’s the thing about Oliver, he loves all these beautiful stuff and he procures all these items for the Young family and I find him very similar (to me) in that way. I’m always telling my friends and my boyfriend, ‘Have you had this type of chocolate before?’ ‘Do you know about this designer?’ I should have been born a crazy rich Asian because I do have expensive taste. I have champagne taste but I’m on a beer budget.”

He and the other members of the cast bonded instantly. “It’s just so great. We all bonded from the first second that we met, it felt like instant family. That’s what it felt like. We’ve had a Whatsapp group chat going on since the first day of filming that’s still going on to this day. Like everybody from the cast, we all still talk. The fact that we were able to share this really significant moment, that we’re a part of this huge movie that’s so significant to the culture and that we all got to share that experience, we all felt that on set. We felt it right away when we were filming, that we were part of something bigger than us and that we were part of something special.”

His favorite scene to shoot? “The makeover scene! That scene was fun. Any scene that I had with Awkwafina and Ken Jeong, it’s hard to keep a straight face around those two because they just crack you up. I love them so much.”

Like us, he’s hoping for a sequel—or two. “Listen, I would love it if the next two books are made into the movies. I love Oliver the character. If anything, I want to film the sequels just so I can work with these people again. They’ve really become my family.”

It was also Crazy Rich Asians that finally gave Nico the chance to return to the Philippines after 21 years. Between shooting his scenes in Singapore and Malaysia, Nico grabbed the chance to fly to Manila. “Grabe talaga, ibang-iba na talaga ang Manila. It changed so much. When I was growing up, alam mo, the only thing that was the same was Landmark. Nakita ko ’yung Landmark, sabi ko, uy, pareho pa rin ’yung Landmark. But everything around it… Kasi I used to go to Greenbelt when I was a kid to watch movies. Ibang-iba na siya. ’Yung Greenbelt, sabi ko, Hermes? Cartier? Crazy Rich Asian! Sosyal!”