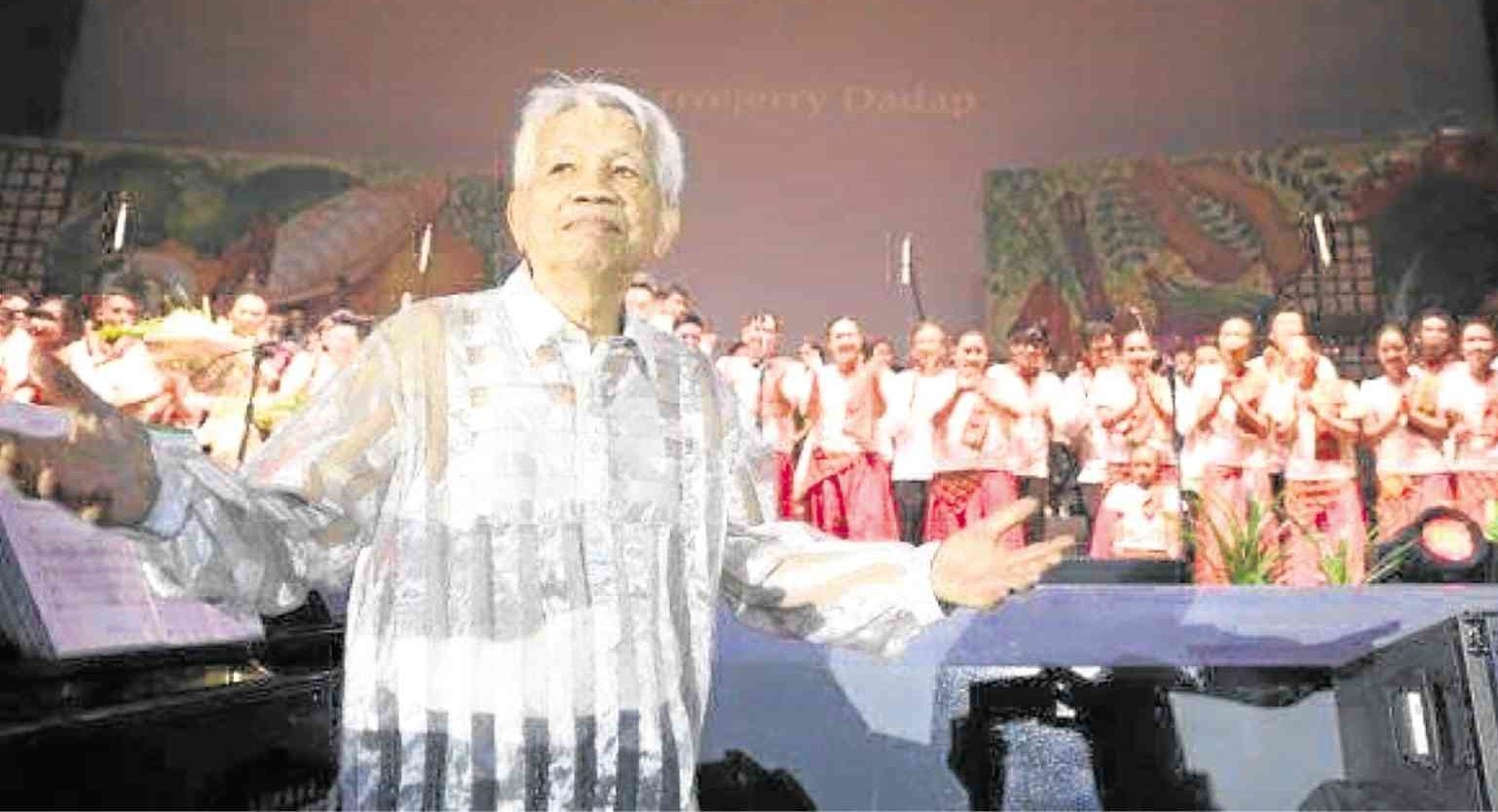 The late Vedasto Dadap Sr., a public school teacher, was a local hero in the town of Hinunangan, (now Southern) Leyte during the war years. The family had evacuated to the mountains when the Japanese came, and Dadap organized the farmers to feed hundreds of guerrillas. He also prevailed upon schoolteachers, who had been ordered by the Japanese to return to the town, not to obey.

“Working with guerrillas, my father helped liberate the entire province of Leyte,” recalls Jerry Dadap, noted composer and director of the Andres Bonifacio Concert Choir (ABCC). Vedasto married Dionisia Amper, who was into music, and who gave her husband 14 children, all of whom were gifted musically, composing, singing, playing the instruments and teaching.

Of the 14, there are five surviving siblings: Jerry, Michael, the New York-based classical guitarist and rondalla authority; Rachel, Vedasto Jr. and Joel.

“There were a lot of beautiful girls in my barrio,” says Jerry. “As a child I would hear my eldest brother José sing, he had a beautiful tenor voice. He would pick up a guitar and he and the binatilyos (young men) would serenade the girls. Sometimes they would go out of town to do more serenading.”

The harana, canciones and the other songs sang by their mother stayed in Dadap’s mind through the decades and he incorporated these into the repertoire of the ABCC.

More than 70 years after the end of World War II, the municipality of Hinunangan honored the memory of Vedasto Dadap by naming a major street in the town after him. This was cause for rejoicing on the part of the Dadaps and the Ampers and, in coordination with the local government (headed by Rep. Roger Mercado, Gov. Damian Mercado and Mayor Reynaldo Fernandez) and prominent residents, they held a series of celebratory concerts which turned out to be a grand reunion for the clans. The event also coincided with the Hinunangan town fiesta.

The concerts were held at United Church of Christ in the Philippines; Bethel Academy, an outreach program for grade schoolers; Tara’s Chamber Music Sala, a gala concert (“Remembrances’); capped by a show before a big crowd at the Hinunangan Municipal Cultural Center.

Performers were the ABCC and the Kwerdas Ensemble, a leading rondalla group led by Michael Dadap. Soloists were tenor Samuel Maláki, a Dadap on his mother’s side and a distinguished alumnus of the ABCC; tenor Wiliam Serrano, the Supremo in Jerry Dadap’s mighty musical “Andres Bonifacio: Ang Dakilang Anak Pawis”; soprano Bettina Celeste Dadap, Oryang in the Bonifacio musical; and soprano Venus Romero, a fourth generation Dadap.

The choir sang regional folk songs, religious hymns, Filipino and Visayan songs of love, and patriotic anthems. The Kwerdas Ensemble accompanied them but they also had their own distinctive repertoire. Kwerdas performer Ian Resurrection brought the house(s) down with his side-splitting Nonoy Villame numbers.

Highlight of the concert was the stirring Hinunangan Hymn by Michael Dadap, calling upon Hinunangos to stand up for their rights and set a good example for the young.

It was a great day for the musical Dadap-Amper-Maláki clans, who trace their roots to this unpretentious, tree-laden town by the bay, with its nearby pristine islands ripe for responsible ecotourism. —CONTRIBUTED