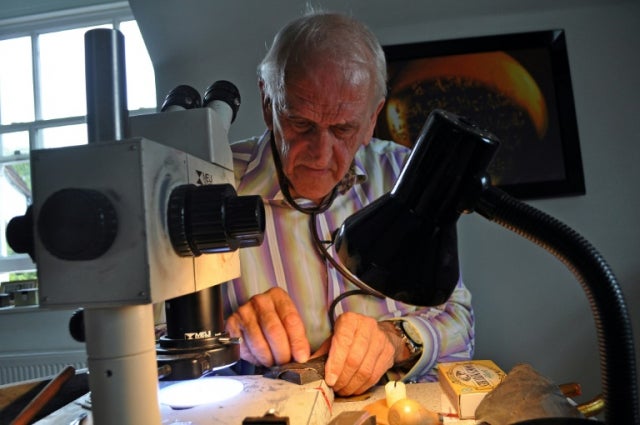 Using Botox, beta-blockers and the stillness of the night, Graham Short produces miniature engravings like nobody else.

Often dubbed “the world’s smallest engraver,” he hand-carves phrases and symbols onto the tiniest of surfaces, from pinheads to the edge of a razor blade.

Short takes beta-blockers to slow his heartbeat to get the steadiest possible hand, and injects his eyelids with Botox to relax their muscles.

The 72-year-old works from midnight to dawn to minimize vibrations from outside.

“I know it’s a bit extreme… I’m so obsessed with it,” he told AFP at his home-studio in the suburbs of Birmingham, central England. “I don’t think anybody else would go to these lengths.”

He claims he’s the only person doing miniature engraving and says “that’s what drives me on.”

Once complete, often after months of work, his pieces are displayed in a lit case under a microscope, illuminating intricacies invisible to the naked eye.

He sold an engraving of Queen Elizabeth II’s head on a piece of gold lodged in the eye of a needle to a Scottish dairy farmer for £100,000.

He also engraved “nothing is impossible” on the sharp edge of a razor blade, which sold for £50,000 to a gallery in northern England.

“Love” on a grain of salt

Short left school aged 15 with no academic qualifications, but got an apprenticeship with an engraving company before starting out on his own.

He spent decades as a stationary engraver for clients including the royal family and department store Harrods.

In his spare time he tried his hand at miniature engraving, first working under two magnifying glasses and now using a microscope.

His first project, carving the Lord’s Prayer onto the head of a two-millimeter-wide gold pin, took decades to complete as he juggled his business and family life.

“When I finished that I couldn’t stop looking at it,” the father-of-two recalled. “It had taken over my whole life.”

As traditional engraving work dropped off in the digital age, Short began to devote himself entirely to his miniature craftsmanship.

He has created 48 works over the last 15 years, he estimates, some made to order.

Among the most eye-popping was engraving the word “love” onto a grain of salt, which was then balanced on an eyelash plucked from the eye of the client’s wife.

The customer, a Russian oligarch in London who wanted a novelty Valentine’s Day gift, had made his fortune in the salt mines of Siberia.

Short rose in prominence in Britain after engraving miniature portraits of “Pride and Prejudice” author Jane Austen onto four £5 banknotes in 2016.

He gave them away in a Willy Wonka-style treasure hunt, spending the notes randomly across the country.

One of them was later auctioned for £6,000, while two others were kept by their finders and another remains in circulation.

“I couldn’t believe the interest, to be honest,” he said.

Four are still waiting to be found, another will be presented to the Football Association and he wants to give the sixth to the player himself.

“They’ve asked me to go to a football match in London and present it to him,” Short said.

Short pushes himself to engrave on ever-smaller surfaces, hitting the limits of the human body.

“The smaller I go, the stiller I need to be. I need to be absolutely motionless,” he explained.

He tried meditation and breathing techniques but found them insufficient, so he turned to a regime of exercise — swimming 10,000 meters daily — and beta-blockers.

“When I’m working, I eat them like sweets and I can get my heart rate down to 20 beats a minute,” he said.

“Then I try to engrave when I’m absolutely dead-still between heartbeats.”

A normal resting heart rate for adults is 60 to 100 beats.

Short injects his eyelids with Botox every three months to ensure there is “no distraction from eye nerves and muscles.”

Perhaps unsurprisingly, he does not enjoy creating his artworks but revels in the outcome.

“The best part for me is when it’s finished and it’s in the gallery under the microscope and somebody comes in… and they’re absolutely knocked out,” he said.

“I absolutely love it, because I know I’ve done something that no one else can do.” CC