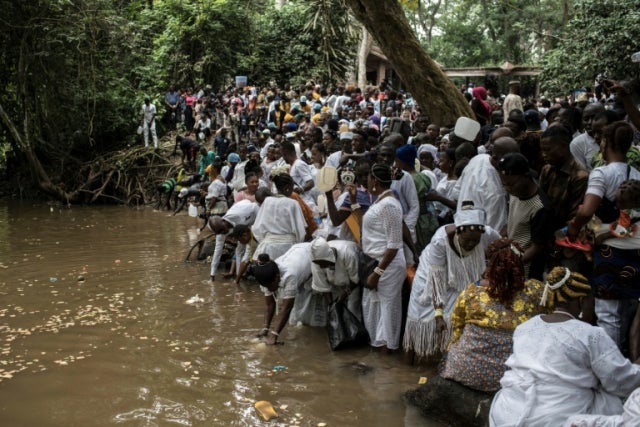 In Nigeria, thousands celebrate Osun, goddess of fertility and water

“I’m dressed like a river,” says priestess Osundele Okugbesan as she shows off her flowing white strapless dress and long beaded necklaces cascading down her chest.

This year, as she has done for the past 35, she has come to the Osun-Osogbo Sacred Grove in southwestern Nigeria to celebrate Osun, the great Yoruba goddess of fertility and water.

Others have tattoos of fish on their bodies or have sewn seashells onto their dresses.

Every year, the festival attracts thousands of Yorubas, an ancient ethnic group in West Africa that numbers around 40 million, the vast majority living in Nigeria.

According to UNESCO which named the area a World Heritage site in 2005, the dense forest of the grove and “its meandering river is dotted with sanctuaries and shrines, sculptures and art works in honor of Osun and other deities.”

“You do not decide to become an Osun priest,” says one mother holding the hand of her little girl, whose face his half black, half white.

“It’s the spirit that chooses you. Look at my daughter, she was chosen too, one day she will become a great priestess,” she says enigmatically before retreating.

Beating drums and the sound of shots from colonial-era rifles build to a crescendo. Soon tens of thousands of people are marching past.

Crowds accompany the Arugba, a virgin whose face is covered with a scarlet cloth embroidered with shells, to the river where the spirit of the water goddess lives.

The wife of Sango, god of fire and thunder, once demanded a sacrifice to bring prosperity to the community, but today the virgin is just tasked with giving the offerings to the sacred river.

On the riverbank, in the shade of century-old trees, a woman reads the future in kola nuts.

One after another, women fall into a trance and have to be held back so that they do not drown in the river.

It could all be a scene from another lifetime, were it not for the billboards advertising mobile phone services and other 21st-century wares.

And yet belief in the Yoruba gods persists, unstifled by either successive Muslim jihads in the Sahel, Christian colonialists from Europe or, more recently, by evangelical pastors from Nigeria’s mega-churches.

These Nigerian women will turn to the beautiful Osun to give them children.

“Traditional religion has not been killed by modern religion because it is too deeply rooted among the Yoruba people to be destroyed,” said researchers Saskia Cousin and Jean-Luc Martineau in the academic journal Cahiers d’Etudes Africaines.

“I’m Christian, Muslim and a traditionalist,” said Ayodele Folasade, an employee of the Osogbo museum.

“I pray to Allah five times a day, I pray to the Lord Jesus Christ, but I also go to worship Osun by the river,” Folasade said.

“Yoruba people say that if your prayers don’t work with one God try the other ones,” she said with a smile.

“Pastors or imams say it’s not good to have many gods, but almost everybody turns to Osun when they need her,” said Folasade.

Omitola Babaosha, a visitor to the festival, said he believed in the traditional gods but unlike others did not hide it.

“I’m very proud of my heritage and I don’t care what people say about me,” said Babaosha, wearing a large white tunic.

“Whoever you believe in, whatever your religion, at the end of the day you need water to survive,” he said.

“There is no one on this earth who isn’t a child of Osun,” he said, hand in hand with his wife, walking in the crowd.

“Going to the river to celebrate her spirit is like saying ‘thank you’ for the creation of nature.” CC