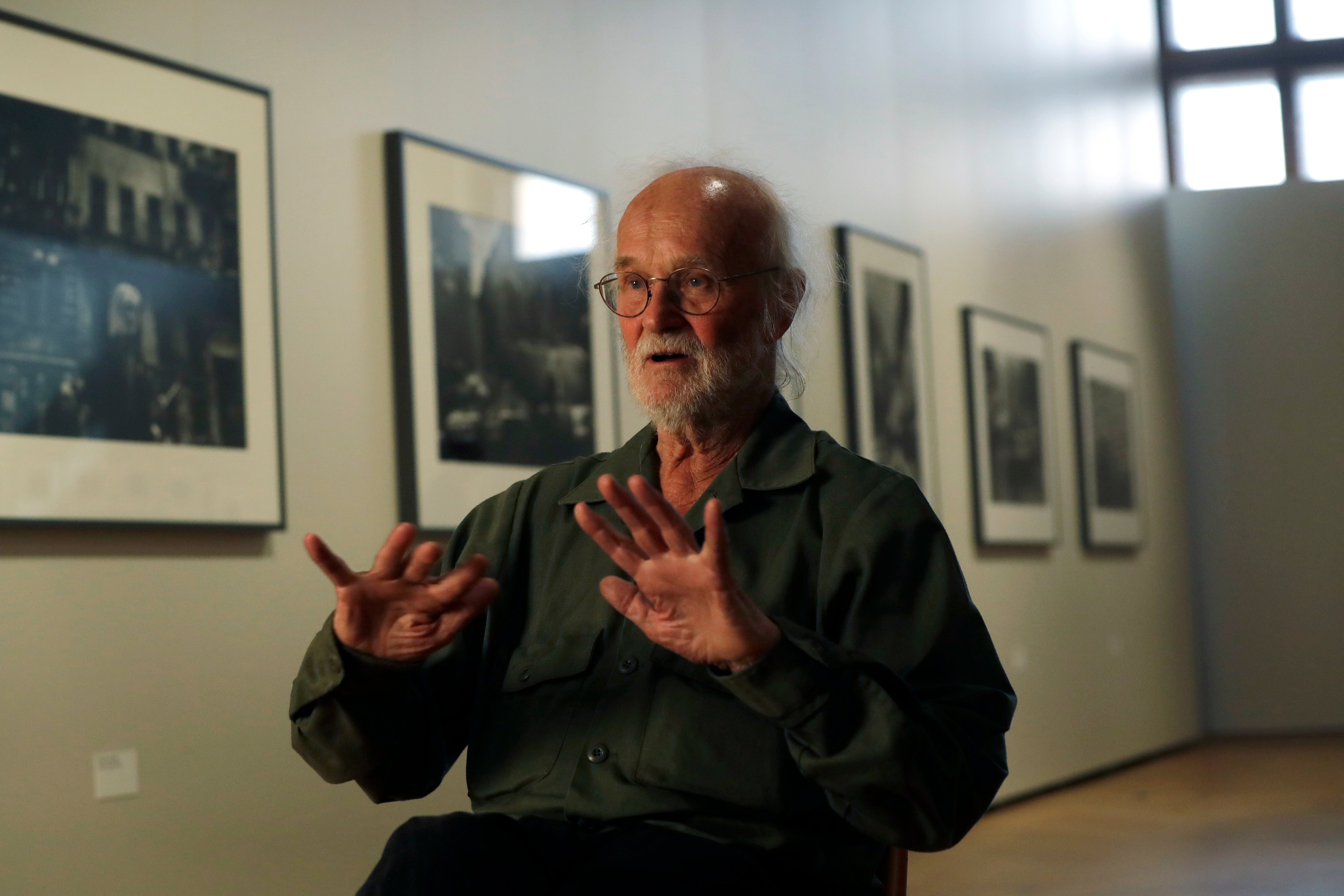 In this Aug. 10, 2018 photo 80-year old photographer Josef Koudelka answers questions in a rare media interview with the Associated Press at his retrospective exhibition "Returning" at the Museum of Decorative Arts in Prague, Czech Republic. Powerful images taken by Koudelka when he risked his live to document the Warsaw Pact invasion of Czechoslovakia some 50-years ago, still resonate across the world by bringing back memories of the 1968 Soviet-led invasion. Image: AP/Petr David Josek

PRAGUE (AP) — It’s been 50 years, but powerful images of the Soviet-led invasion of Czechoslovakia taken by photographer Josef Koudelka still resonate among Czechs and elsewhere in the world — they’ve even been admired in Russia.

As the armies of the five Warsaw Pact countries invaded his country an hour before midnight on Aug. 20, 1968, Koudelka was ready. Risking his life, he took thousands of photos in the week that followed, capturing the shocking experience for his nation — and the defiance of its people.

After the negatives were smuggled out of the country, the photos that were published in the West became one of the most famed documentary series of the 20th century.

Looking back at 1968 in an interview with The Associated Press, Koudelka said he seized the once-in-a-career opportunity.

“The opportunity to take so many photos made it possible for me to do something I never thought I would be able to do,” Koudelka said. “And I think that a majority of people in Czechoslovakia who knew me as a photographer didn’t even think I could do anything like that.”

His photos captured the mood on the streets of Prague: the public anger, frustration and massive protests against the troops that came in with tanks to crush the Prague Spring — the brief period of liberal reforms under leader Alexander Dubcek meant to lead toward democratization of communist Czechoslovakia.

“It was a tragedy. But also miracles happened at the time,” Koudelka said. “One of the biggest miracles for me was — and that has happened at major events elsewhere — that people are able to completely change overnight.”

He said in reaction to the attack, the whole nation became united.

“No matter who you were, only one thing mattered: We were all against them,” he said.

One of his now-iconic photos shows a man holding his coat wide open in front of an armed soldier standing on a Soviet tank, while another one captures an elderly man trying to hit a tank with a cobblestone.

“My photos captured a moment when we behaved like a nation,” Koudelka said. “And that didn’t happen too often in our history.”

Unarmed people could not stop the armies, however, and the country was subsequently taken over by a hard-line Communist regime fully loyal to Moscow. The occupying troops stayed for over 20 years and withdrew only after the 1989 Velvet Revolution led by the late Vaclav Havel.

According to historians, 137 people were killed by Warsaw Pact soldiers in 1968 alone, and a total of over 400 died during the occupation of Czechoslovakia.

Koudelka’s photos were first published by media around the globe in 1969 under the attribution “P.P.” (Prague photographer) to prevent his persecution by the Communists.

He left the country in 1970 to work for the Magnum Photos agency and didn’t reveal until 1984 that he was the author of the 1968 pictures.

Now 80, Koudelka is not ready to retire. He still keeps his camera busy every day.

Over his long career, he took many great photographs, including his Gypsy, Exile and Panoramas series that are in the collections of major museums, including the Centre Pompidou in Paris, the Museum of Modern Art in New York and the J. Paul Getty Museum in Los Angeles.

But his 1968 photos have been most known globally. This year alone, there are exhibitions of his work in Poland, Belgium and Italy, together with a retrospective, “Returning”, at the Museum of Decorative Arts in Prague accompanied by the publication of his new book of the same name.

His photos been displayed around the world, including in China and Russia.

“I never believed I would be able to take the Russian tanks to Moscow,” Koudelka said. CC

Photojournalists ’emotionally torn’ by their pictures of EJK victims