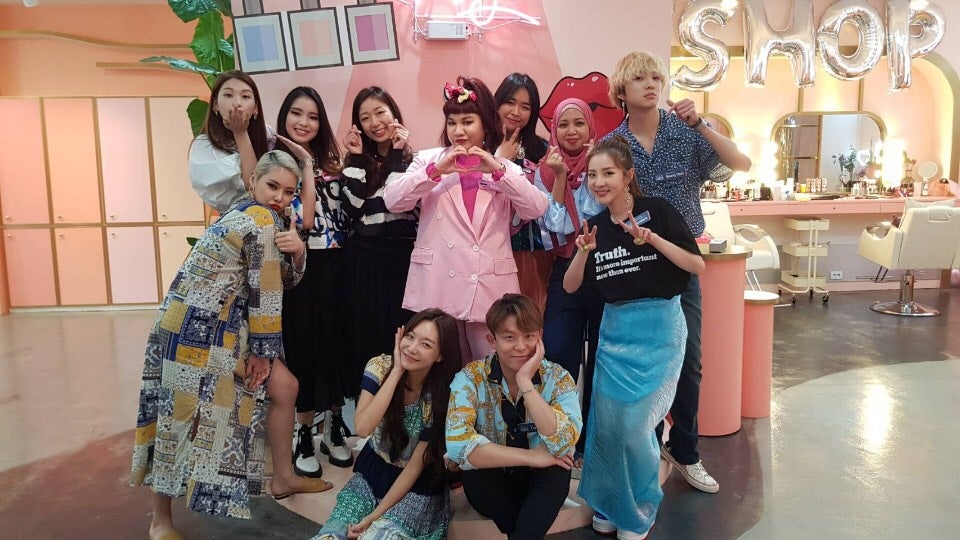 Fan from Manila will appear on Sandara’s beauty reality show

SEOUL—The land of K-beauty has rolled out the red carpet for a first-time visitor.  K-pop fan Pamela Rose Tulin never imagined that she would meet Korean celebrities on her first trip to South Korea. She describes the moment as being “unbelievable.”

She met, talked with and got a total makeover from the crew of Mimi Shop as the participant chosen by Viu Philippines to represent the country.  JTBC4’s “Mimi Shop” is a beauty reality show that stars 2NE1’s Sandara Park, H.O.T.’s Tony Ahn, actress Shin So-Yul, model Kim Jin-Kyung and rapper Cheetah.

Mimi Shop is also the name of the actual shop.  People from all walks of life enter the salon to get their makeups done by these stars.  The stars do not know who will come through the door and that is what makes it fun to watch.

“It did not feel like a shoot.  It was like playtime.  I felt so at home,” said Tulin in Filipino as she spoke of her time in the set.

She said she chose Sandara to do her makeup. It surprised her that the idol spoke to her directly in Filipino.   Another surprise waiting for her was that Kang Seung-Yoon from the South Korean boygroup Winner was also in the set as the shop assistant.

Seung-Yoon was the one who looked after her while waiting for her turn to get made up.  She ordered sikhye, a traditional sweet Korean rice beverage.  She was with other fans from Indonesia, Malaysia, Singapore and Thailand.

She was surprised that the celebrities genuinely seemed to be interested in her. They talked to her about her recent breakup from a long-time boyfriend. They all showered her with lots of love.  This is part of the healing services that the Mimi Shop offers.

She also learned skincare from Sandara.    She said that she used to directly apply makeup without anything under it.  Sandara taught her that she must use toner and moisturizer before anything else.

Tulin also enjoyed her time from Jin-Kyung. The model took charge of her styling.  She coaxed Tulin out of her usual clothing to try colourful clothes and high heels.

“I am not used to that kind of style at all (laughs).  I found Jin-kyung to be very nice and very beautiful. I did not expect her to be so down-to-earth,” she raved.

Influencers also flew in for the special episode.  Ana Gonzales was the chosen influencer for the country.  They learned how K-beauty trends have influenced other Asian countries.  Gonzales also got the “pineapple hairstyle” from Sandara.  The look was the same hairstyle Sandara rocked during her 2NE1 days.

The special episode of “Viu X Mimi Shop” will be streamed on Viu on Aug. 30.  The streaming app can be downloaded via Apple Store and Play Store.