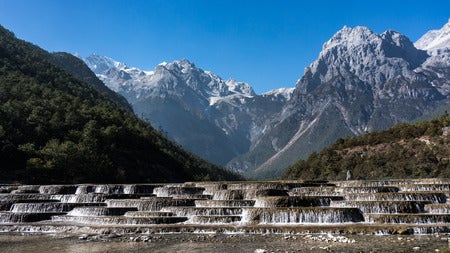 How far would people go for the perfect Instagram-worthy shot? For two groups of Chinese tourists, a simple wish to take photos escalated into a nasty fist fight.

Two groups of Chinese tourists ended up throwing fists while atop the Jade Dragon Snow Mountain in Yunnan province, China last Aug. 16. A video of the incident was circulated online by a witness, according to South China Morning Post on Aug. 21. As per the report, the brawl arose after the two groups had a dispute over a picture-perfect spot.

Overcrowding at the mountain has been an ongoing problem, with tourists visiting every year just to take pictures at the scenic areas. Local police, however, said that violence is uncommon.

The men weren’t daunted nor unnerved as they fought at an elevation of 4,680 meters. Despite the thinning oxygen at such a height, they repeatedly threw punches and kicks at each other against the backdrop of the beautiful snowcapped mountains, according to the report. Other tourists merely watched on.

Local police immediately arrived to break up the fight, bringing the tourists down from the mountain to have them questioned at the station. Apparently, the two tourist groups hail from Kunming in Yunnan province and Gutian in Fujian province, respectively.

“After police investigations and intervention, both sides realized their faults,” a statement by the Lijiang Yulong Police said last Aug. 16.

It is unknown if the two tourist groups were able to get the perfect shot they wanted. Cody Cepeda/JB