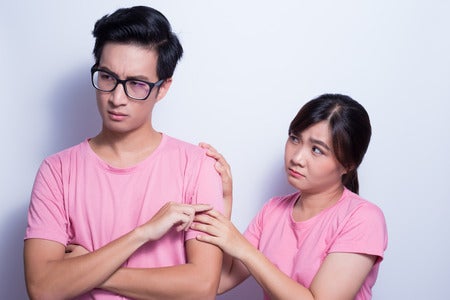 Does this look like you and your on-again, off-again lover? Beware. INQUIRER.net stock photo

It may be exciting and dramatic for some, but new United States research has found that on-off relationships could be harming mental health.

Carried out by researchers at the University of Missouri, the new study looked at data from 545 participants, including 279 in same‐sex and 266 in different‐sex relationships.

The researchers found that the rate of breaking up and getting back together was similar across relationship types, but more common in male-male relationships compared with female-female and different‐sex relationships.

However, regardless of the relationship type, the more on-off a couple was, the more psychological distress symptoms the members exhibited such as depression and anxiety.

Previous research has estimated that more than 60 percent of adults have been involved in on-off relationships, and more than one-third of couples who lived together have at some point ended the relationship before later reconciling.

In addition, compared to relationships without this pattern, on-off relationships have been associated with higher rates of abuse, poorer communication and lower levels of commitment.

“Breaking up and getting back together is not always a bad omen for a couple,” said study author Kale Monk. “In fact, for some couples, breaking up can help partners realize the importance of their relationship, contributing to a healthier, more committed unions. On the other hand, partners who are routinely breaking up and getting back together could be negatively impacted by the pattern.”

The researchers added that couples break up and later get back together for many different reasons, although a common one is necessity or practicality, such as for financial reasons or because they feel they have invested too much time into the relationship to leave.

However, Monk warns against getting back together because of feeling of obligation.

“The findings suggest that people who find themselves regularly breaking up and getting back together with their partners need to ‘look under the hood’ of their relationships to determine what’s going on,” he added. “If partners are honest about the pattern, they can take the necessary steps to maintain their relationships or safely end them. This is vital for preserving their well-being.”

The findings can be found published online in the journal Family Relations. JB

Ali Khatibi on cheating: ‘You’re more of a man if you can avoid it’

Emotional Cheating Is Real and Hurts Like a B*tch