Yasujiro Ozu’s “A Straightforward Boy” will be screened on Sept. 1, 6 p.m., with a narration by Tito Valiente (below), the first Pinoy “benshi.” 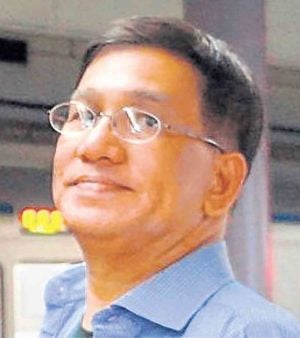 Japanese cinema master Yasujiro Ozu’s “A Straightforward Boy” (“Tokkan Kozo”)—thought to have been lost to the ravages of time—will be screened in the 12th International Silent Film Festival, not just with live music but also with a narrator, or what the Japanese call katsudo benshi. The festival runs Aug. 30-Sept. 2 at Cinema 2, SM Megamall, Mandaluyong.

In Japan’s silent film era, the benshi could become more popular than the works they narrated and had fans who followed their performances, which combined acting and storytelling.

Anthropologist, film critic-educator, writer and former community theater actor Tito Genova Valiente is the first Filipino to take on the role of benshi. He and Tanikala Tribe, a four-member pop-ethnic-folk fusion band from Bicol, will accompany “A Straightforward Boy” at the film fest on Sept. 1 at 6 p.m.

The short film, about the kidnapping of a boy who turns out to be haughty and uncontrollable, is one of the earliest works of Ozu, who has been revered for his understated, nuanced approach to filming stories about the middle class. But the great Japanese filmmaker actually began his directing career with comedies, such as “Boy,” many of which were lost over time.

In 2015, a 14-minute version of “Boy” that surfaced in the late ’80s was screened at the silent film fest in Manila. This year’s longer version (19 minutes) is owed to a Pathé Baby copy found just three years ago. (Pathé is a French film company that’s second-oldest in the world.)

To watch out for

Seven other countries contribute to the festival lineup.

“Satanic Rhapsody” (“Rapsodia Satanica”), to be shown 8 p.m. on Aug. 30, is among Italy’s most treasured “stylish melodramas.” The film is about an aging aristocrat who makes a pact with the devil to restore her youth and beauty.

France presents “The Passion of Joan of Arc” (“La Passion de Jeanne D’Arc,” Aug. 31, 9 p.m.), the 1928 retelling of the trials of the French teenage martyr. It has been hailed as an “unflinching portrait of suffering” and the director Carl Theodor Dreyer’s “silent masterpiece.”

From the United States, to be shown Sept. 1, 8 p.m., is the Buster Keaton-starrer “Our Hospitality,” which the popular star of American classics also codirected. It’s comedy, romance and a bit of suspense rolled into one.

On Sept. 2, 5 p.m., Spain presents “Frivolinas,” a comedy that explores the musical and dance shows that were the rage in the 1920s Madrid theater scene.

Besides Tanikala Tribe, among the bands and music acts to accompany film screenings are MilesExperience, a rock band from the Conservatory of Music of the University of Santo Tomas; Khavn and the improv group Kontra-Kino Orchestra; Kontemporaryong Gamelan Pilipino, or Kontra-GaPi, from the University of the Philippines; Brass Munkeys, a Latin-jazz-swing band; and Tapati, an indie group that plays multiple genres including Philippine neo-ethnic tribal music.