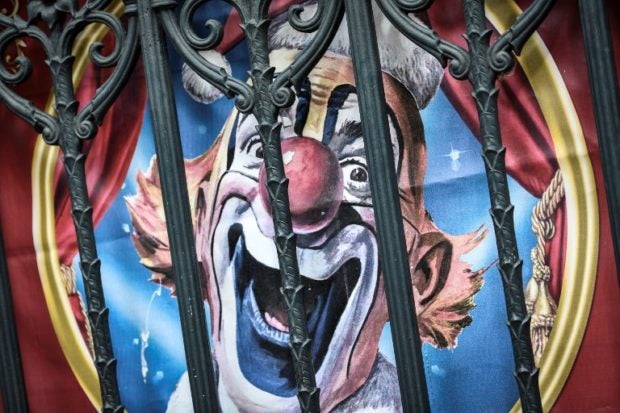 This photograph taken on August 27, 2018, shows a detail of an exterior view of the 'Cirque d'Hiver' building in Paris. The Cirque d'Hiver Bouglione was bought in 1934 by the four Bouglione brothers : Alexandre, Joseph --Rosa's husband--, Firmin and Nicolas. Rosa Bouglione, the widow of circus owner Joseph Bouglione, has died at the age of 107, it was announced on August 27, 2018. / AFP PHOTO / STEPHANE DE SAKUTIN

“Right up to August 26, she remained the uncontested queen of the circus,” a family statement said.

She reigned over the Cirque d’Hiver (Winter Circus) in the heart of the French capital “for nearly a century,” after her husband Joseph and his three brothers bought the venue in 1934, the statement added.

“Madame Rosa received the greatest stars and welcomed the greatest international artists to this temple of the circus,” which has a capacity of 1,500.

In her extraordinary life story published in 2011, Bouglione told of how she was married in a lion’s den.

Born in a horse-drawn caravan to a family of performers in Belgium on December 21, 1910, under the name Rosalie Van Been, she died Sunday in Paris at her home close to the Cirque d’Hiver.

“Five generations,  covering 55 children, great and great, great grandchildren will say adieu to their emblematic grandmother who has bequeathed them a love of the circus,” the statement said.

The public will be able to pay their respects before the coffin at the famed Cirqued’Hiver on Wednesday ahead of a funeral mass during the afternoon.

Rosa will be buried alongside “all the members of the dynasty” at the cemetery in Lizy-sur-Ourcq, near the River Marne northwest of Paris, the family said. MKH

Tiger escapes from circus, is killed after roaming Paris streets

Kids with autism find passion and growth in circus arts