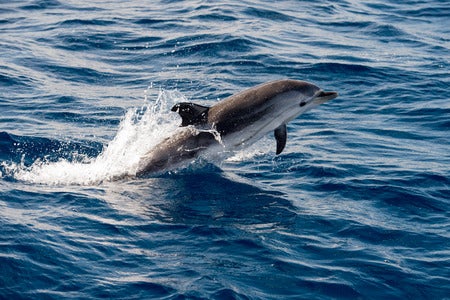 One dolphin is behind a beach ban after his sexual behavior became too rampant for a French community.

Roger Lars, the Mayor of Landévennec, a commune in northwestern France, issued an ordinance that has banned swimming and diving into the village shoreline when the dolphin is around, The Telegraph reported yesterday, Aug. 27. Swimmers must also stay at least 50 meters away from the mammal.

He told newspaper Ouest-France that the ban was out of concern for people’s safety. “He even lifted up a woman bather with his snout,” he said.

The male dolphin spans three meters long and has earned the name Zafar. He has been making the rounds at the beaches of Bay of Brest, where he would pop up near boats and would even allow swimmers to ride on him.

A few weeks ago, he began to show signs of sexual arousal, such as rubbing up against small boats. But soon he began to cozy up to humans too, reportedly causing fear. Though swimmers may have been intimidated by his size, he was not aggressive, reported local paper Le Télégramme via The Guardian.

However, the restrictions didn’t go swimmingly with lawyer Erwan Le Cornec who planned to file a petition against the mayor’s action.

“The mayor wants to make dolphins look like almost ferocious beasts, completely unpredictable and likely to drown people,” he said in a statement.

“If you were to apply these rules across the board, whenever a pedestrian approaches a dog, even if it is on a leash, all the mayors in… France should issue bylaws banning pedestrians in town.”

The ban has been lifted, reports The Guardian, after the dolphin moved on to other waters. Niña V. Guno/JB

Fish sex so loud it could deafen dolphins