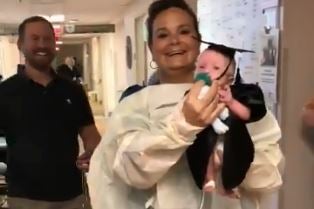 LOOK: Baby ‘graduates’ from intensive care in toga and cap

One baby recently “graduated” from the Neonatal Intensive Care Unit (NICU) — complete with a black toga and graduation cap.

The video of the baby’s triumphant departure from intensive care was shared on Twitter last Aug. 24 by the University of South Alabama’s Children’s and Women’s Hospital. It was a sight that touched the hearts of many who witnessed the scene.

In the video, a woman can be seen walking down the hospital carrying the baby, Cullen Potter, in her arms. Cullen can be seen wearing the proverbial toga and cap as the woman carrying him marched ahead. The hospital staff joyously watched on and fawned over baby Cullen.

A baby boy born at 22 weeks in our Level 3 Neonatal Intensive Care Unit (NICU) recently “graduated.” We love the cap and gown! pic.twitter.com/eWnl9cxBmg

Cullen’s mother, Molli Potter, took to Facebook last Aug. 22 to share about Cullen’s miraculous story. According to Molli, they were told that Cullen only had a 2 percent chance to live.

“Well, here’s our 2%. Perfect in every way,” wrote Molli as she shared a before-and-after picture of Cullen. “God is good, big boy.”

Cullen was born at 22.2 weeks (less than 6 months) and only weighed 13.9 ounces. He had to stay in the hospital for five months before being allowed to go home and by then already weighed around 5 pounds.

Molli also shared that their local hospital, Sacred Heart Hospital in Pensacola, Florida, refused to “save” Cullen after discovering that he was below 24 weeks. She and her husband then opted to transfer after calling “16 hospitals in 3 states to find one that would save him.”

“They acted like transferring was pointless, that trying to save him was pointless,” the mother recounted. “Well, here he is. Alive and thriving. Never give up.”

The couple were eventually taken in by the USACW Hospital with no hesitation and to this, Molli is forever grateful.

“They believe in these small babies and give them the fighting chance they deserve,” said Molli. “I pray that more doctors and hospitals see stories like my sons and many more, that they will reconsider their policy and give all the babies the chance they deserve.”