‘Architecture does not exist in a vacuum’ | Lifestyle.INQ ❮ ❯ 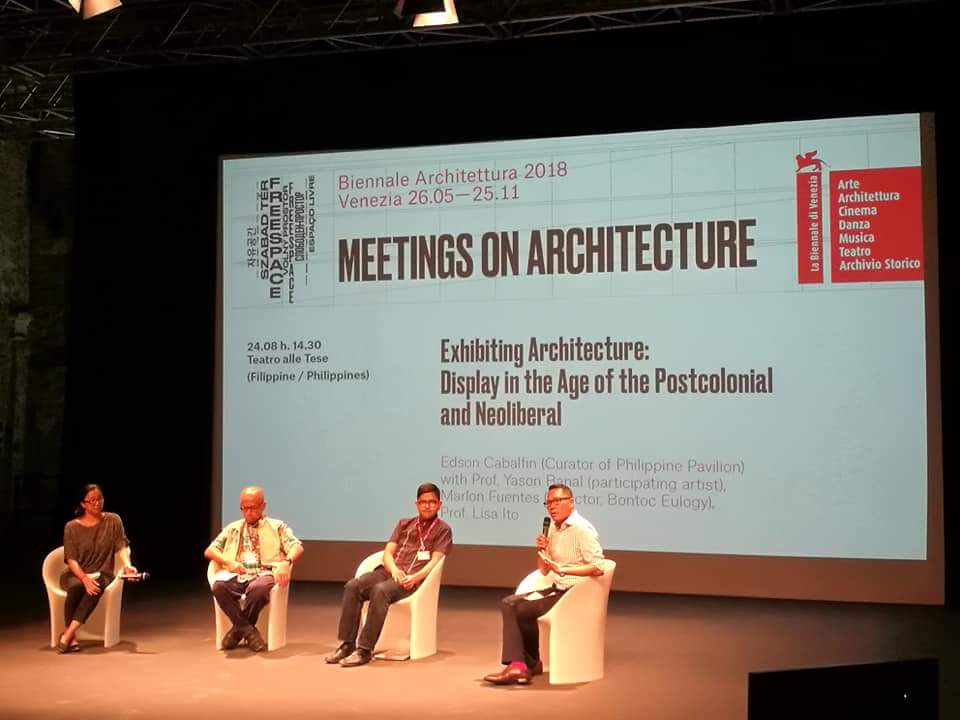 ‘Architecture does not exist in a vacuum’

Venice, Italy–Filmmaker Yason Banal set the tone for the series of corollary events held here at the Venice Architecture Biennale 2018. In his talk, he said that architecture does not exist in a vacuum. “It is intersectional, not isolated,” he said.

The curators of this year’s Biennale selected the Philippines’ proposal “Exhibiting Architecture: Display in the Age of the Postcolonial and Neoliberal” to be part of the “Meetings on Architecture” program.

As the featured artist at the Philippine Pavilion at the Arsenale, Banal provided the video flashed on the two curved “screens” that curator Edson Cabalfin incorporated into the country’s entry, “The City Who Had Two Navels.”

Banal’s presentation at the corollary event consisted of video snippets as disparate as that of Baguio locals protesting the cutting of trees, and scenes from Lino Brocka’s “Manila sa Kuko ng Liwanag” to the recent crash landing of the Xiamen plane on the NAIA runway that resulted in dozens of canceled flights, and thousands of stranded passengers.

Filipinos on the world stage

For his lecture “Nation as Spectacle: Philippine Pavilions in International Expositions, 1897-1998,” Cabalfin looked at how Filipinos have presented themselves on the world stage—and how very little seems to have changed.

“The first time was at the 1887 Exposicion General de las Islas Filipinas in Madrid that featured several villages, including an Igorot village, and water buffaloes,” he said.

At the 1901 fair in Buffalo, New York, a thatched grass roof greeted visitors at the entrance of the Philippine village, while the 1904 World’s Fair in St. Louis, Missouri included over a thousand Filipino men, women and children, some of whom fashioned traditional homes made of bamboo and wood shipped from the Philippines. Visitors came to gawk at our ancestors, marveling at the women’s bare breasts, and watching transfixed as the Igorots killed and butchered dogs for food.

These images were some of the archival footage that photographer and artist Marlon Fuentes used for his 1993 film “Bontoc Eulogy,” which was screened for members of the Philippine community in Venice and Milan.

The series of events, organized to get more Filipinos living in Italy interested in the Venice Biennale, appears to have worked, if the spirited discussions that followed the screenings were any indication. Guests who attended had no difficulty grasping grounded concepts like the dream of a better life through proper education, or the security and peace of mind that come with having a home to call their own.

“This is the first time that we have seen such participation since the Philippines rejoined the Venice Art Biennale four years ago in 2015,” said Riya Lopez of the National Commission for Culture and the Arts (NCCA).

The idea of participating in the Venice Biennale was proposed by Sen. Loren Legarda in 2013. She later convinced the NCCA and the Foreign Affairs department to work on the country’s entry to the Venice Art Biennale in 2015.