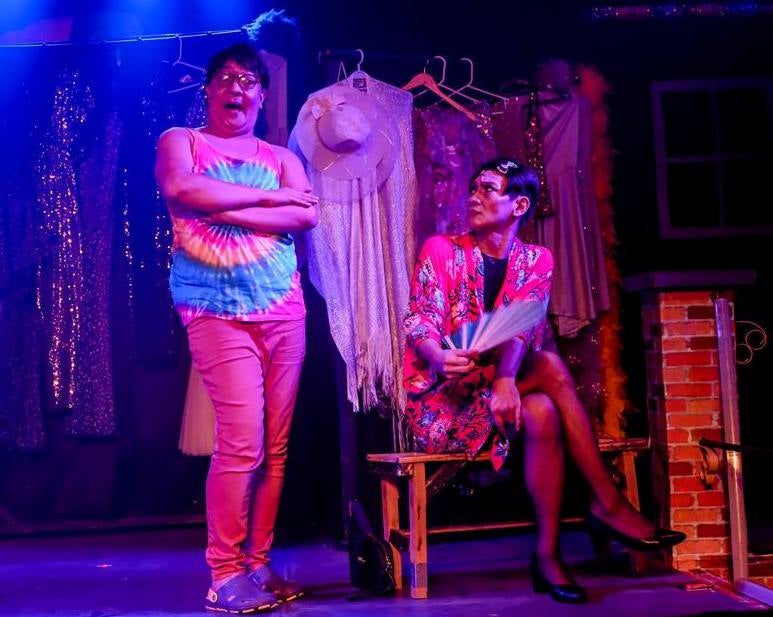 ‘Gee-gee at Waterina, Ang Musikal’: Flamboyance with a dark streak

In the 2000 Metro Manila Film Festival, Dolphy headlined “Markova: Comfort Gay,” based on the life of Walterina Markova, one of many gay men forced into sexual slavery in World War II.

Playwright J. Dennis Teodosio imagined a sort of behind-the-scenes account of that movie for the first Virgin Labfest back in 2005, setting his tale in that snapshot of time when Walterina finally received the payment for film rights to his life story.

Working with Artist Playground, Teodosio expanded his straight play into the recently concluded musical, “Gee-gee at Waterina,” which played only five performances (including a press preview) at Arts Above, Quezon City.

Perhaps such a brief life was all for the best. Despite its roughly 90-minute running time, the production directed by Andrew de Real was a distended affair, managing to feel both too long and too spare, with one too many musical numbers that only sent the story spinning in circles.

At its best, “Gee-gee at Waterina, Ang Musikal” was a marvelous romp. The idea was flamboyance with a dark streak, like vaudevillian cabaret, or as the creators put it during the post-preview talkback, an intimate musical by way of Velma Kelly and Roxie Hart (from Kander and Ebb’s “Chicago”).

The venue, which resembled a rundown music hall, was centered on a stage outfitted to look like a drab dressing room, with robes, sequined gowns and myriad other costumes adorning the walls.

And whenever Norman Peñaflorida took to the spotlight as Waterina’s politician friend Gee-gee (also based on a real person), the musical soared to life. Peñaflorida was game-show emcee, crass but sympathetic friend, and self-aware fourth-wall breaker all at once. The highlight of the show was one of his numbers, which was woven as a hysterical litany of Waterina’s past lovers.

Alas, the musical tripped on its stilettos whenever it turned somber, the epitome of this somberness being Roeder Camañag’s Waterina.

Camañag’s take on the role just felt too studied, the character, as written, at times bordering on caricature. And though it might have been done with the best intentions, the way the more “serious” moments in Waterina’s story were handled made it difficult to take such scenes seriously.

In fact, the one serious moment that actually felt genuine belonged to Gee-gee (thanks, again, to Peñaflorida’s unlabored performance).

It’s this thematic incoherence that plagued the songs (Teodosio’s lyrics set to Jesse Lucas’ music), and even entire scenes. On one hand, there were laugh-out-loud sequences, and on the other, tearful drama, but where the two would (and should) meet—in effect, producing a conscientiously built musical—it was hard to pinpoint.

In his program notes, Teodosio shared the lengthy journey of his original one-act play to the stage, as it morphed along the way into such forms as a 10-minute piece for The Writers’ Bloc and a workshop piece at the Iligan National Writers Workshop. It follows, then, that perhaps what this musical needs is similar extensive incubation, hopefully into something tighter and less tonally dissonant.