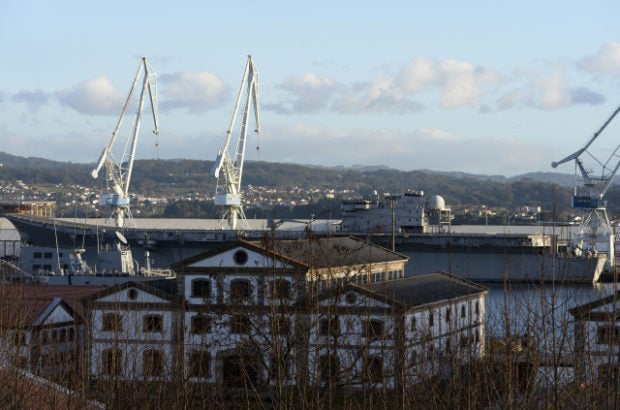 Mural in Spanish town not by Banksy, says official website

It was too good to be true.

A mural sporting Banksy’s alleged signature in a declining town in northwestern Spain that had caused a sensation when it appeared overnight in April is not by the legendary street artist, his website said Friday.

The cheeky, stenciled image of two Guardia Civil police kissing had appeared on a white wall that had been “reserved for Banksy” in Ferrol, where a street art festival set up in 2008 to breathe new life into a dying neighborhood takes place every year.

At the time, Spanish media was rife with speculation as to whether the image — which strongly resembles one of the artist’s most famous images portraying two British cops kissing — was actually his.

But as the annual festival kicked off on Friday, AFP sent an email to Banksy’s official website banksy.co.uk asking whether it was indeed his.

The response was: “It is not by Banksy.”

The story started in 2017 when Estrella Galicia, a beer brand that had just started sponsoring the festival, took out ads in several British cities and newspapers calling for Banksy to join in.

The festival was created by Eduardo Hermida in 2008 who decided to get fellow artists to plaster walls and even doors in the district of Canido with their versions of Diego Velazquez’s famed 17th century “Las Meninas” painting.

The aim was to breathe new life into his beloved neighborhood, in an industrial town dubbed Galicia’s Detroit for its population decline and abandoned spaces.

“Dear Banksy, we have reserved a space for you on one of our streets so that you can freely express your most personal interpretation of Las Meninas and help us to make our neighborhood a more beautiful place to live,” read Estrella Galicia’s ad.

That was in October 2017. Then in April appeared the mural in the style of the mysterious artist, generating huge excitement.

As the months went on, doubts crept in that it was indeed Banksy’s.

Speaking to AFP on Friday, Hermida said he had also written to that same official website asking and that they had never denied it was Banksy’s.

He added he had even received an email coming from Banksy’s website early this year asking him for the exact localization of the white wall, on which the image appeared months later. MKH