Demian Bichir explores his own fears in ‘The Nun’ | Inquirer Lifestyle

Demian Bichir thinks of Father Burke as the James Bond of soul savers.

Demian Bichir explores his own fears in ‘The Nun’

Demian Bichir is not a fan of scary movies.

In fact, the Oscar Best Actor nominee couldn’t even make it through the trailers of “The Conjuring”— and that’s funny, since he stars as Father Burke in “The Nun,” a film that delves into another dark corner of the terrifying Conjuring universe.

“That’s probably why I said yes to this project, to explore my own fears. This genre presented different challenges that I wanted to explore,” he told Super in a phone interview. “The script was very, very well-written and I thought it was a powerful story with great characters. Father Burke was a character I wanted to explore.”

The role had been written with him in mind. This isn’t the first time Demian is playing a priest. The Mexican actor, a  telenovela star who  conquered  Hollywood, played Miguel Hidalgo (the Roman Catholic priest who is considered the father of Mexican Independence) in the film “Hidalgo: La historia jamás contada.”

In “The Nun,” produced by James Wan and Peter Safran, Demian plays a priest with a haunted past who travels to Romania to investigate the death of a young nun. On the order of the Vatican, he brings his spiritual tools—holy water, a silver cross necklace, a crucifix and Bible—and makes the journey with Sister Irene (Taissa Farmiga), a novitiate on the verge of her final vows. The two end up risking their faith, their lives and their souls in a battle of good vs evil.

Demian said, “Father Burke is a man of God. He’s a man of prayer. He’s a man who works for the Lord. But he can be very, very badass as well. When it comes to fighting demons, Father Burke knows how to do that.”

Director Corin Hardy called Father Burke a Dirty Harry of exorcists and Demian agrees. “He is, in many different ways. He does whatever is in his power to defeat evil and that’s exactly what Dirty Harry is, you know, he won’t stop at anything to get justice.” 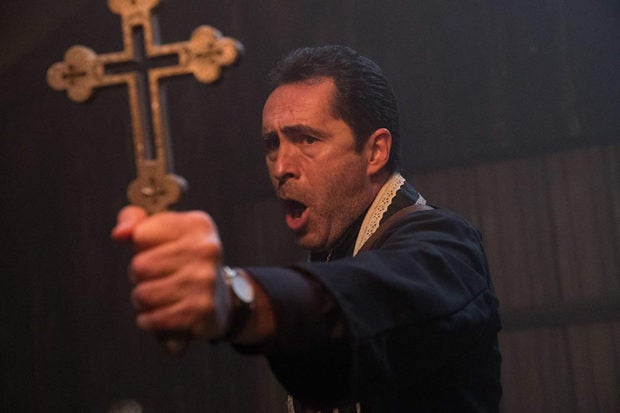 Demian also thinks of Father Burke as “the James Bond of soul savers,” describing him as “as brave and as assertive and as crazy” as 007. “He’s like a secret agent for the church. He investigates and he tries to put the pieces of the puzzle together. He’s a detective, he’s an investigator.”

“The Nun” was filmed entirely in Romania, in and around Bucharest and Transylvania.  Two 14th-century castles—Corvin Castle and Bethlen Castle—and Mogosoaia Fort, an abandoned medieval fort, were among the shooting locations that gave the film an extra layer of terror.

“Shooting in Romania was definitely a big plus. There was very little you have to invent, everything was there and it was real. That makes your job very easy because it’s very, very creepy,” Demian said.

Creepiness was something Demian had to deal with a lot while working on “The Nun.” In a recently released clip, we see his character falling into a coffin and getting trapped with the demonic nun Valak.

“That was a very creepy scene to shoot. That small coffin shut after me and all I had was a little lantern so that was a really, really terrifying feeling. It was very scary to do it even though I know that I’m protected and that everyone is there to take care of me and make sure everything is fine, it was very scary and dangerous.”

That’s just one scene from a film that is bound to be a scream fest. The trailer we saw at a screening of “Crazy Rich Asians” had members of the audience jumping. And “The Nun” had an ad that was so frightening YouTube had to take it down.

“The Nun” reveals the shocking origin of Valak (played by Bonnie Aarons), who first scared horror film fans in “The Conjuring 2.”

Working on the movie was “very, very intense” for Demian. “It’s a completely different territory. When you navigate into the unknown and there are more powerful forces than you, you have to be ready mentally and physically.”

But he found ways to unwind after long and dark days on the set. “One of my favorite things after a day of work is to go for a nice dinner and there are many, many different places to have a great meal in Romania. Nothing like a great meal and a good glass of wine to forget a little bit about crazy nuns.”

Demian also grabbed the chance to enjoy the film’s locations during breaks. “The great part of being an actor is you get to go to beautiful places like Hunedoara and Sighisoara and Bucharest. I think I won’t have the time to plan a vacation all the way to those places unless I’m doing a movie so I’m very very lucky to get the chance to go all the way there. It was a beautiful experience.”

He added, mischievously, “I became friends with a few vampires in Transylvania. That was fun, they took me to the best places at night, they took me everywhere, to the best bars… The only problem is we had to go and hide as soon as the sun came up.”

Some crew members experienced strange occurrences while filming in Romania: A foul burnt smell they encountered at the same spot on the road every day on their way to the village of Cris. Some believed it was caused by evil spirits haunting Bethlen Castle. There were two guys sitting on chairs that Corin Hardy spotted in a dark isolated room in the abandoned fort. Colin said, “I came in, said hello and sat down with my back to them, watching the monitor for a good 15 minutes… I turned around and there was no one there. There weren’t even any chairs.”

We asked Demian if he experienced anything similar. “Something really weird happened one night. We were all having dinner and I had ordered a pizza. I was chatting with some members of the cast and as soon as I turned my eyes back onto my pizza, it was halfway gone. I realized it was Corin Hardy. It creeped me out, I thought it was The Nun,” he joked. We wondered, if the “The Conjuring” was too scary for him (“It’s just too creepy. I hope one day I’ll be brave enough to watch it.”), will he have the courage to watch “The Nun”?

“I don’t think so. They can of course force me to stay but I can close my eyes anytime I want, you know. I don’t know. I will try to stay.”

Asked what else scares him apart from horror films, Demian said, “I think the scariest story that we’re living right now is written at the White House. That’s very scary but sometimes it’s also like a comedy show.”

The Nun, distributed by Warner Bros. Pictures, opens in Philippine cinemas on Sept. 6.