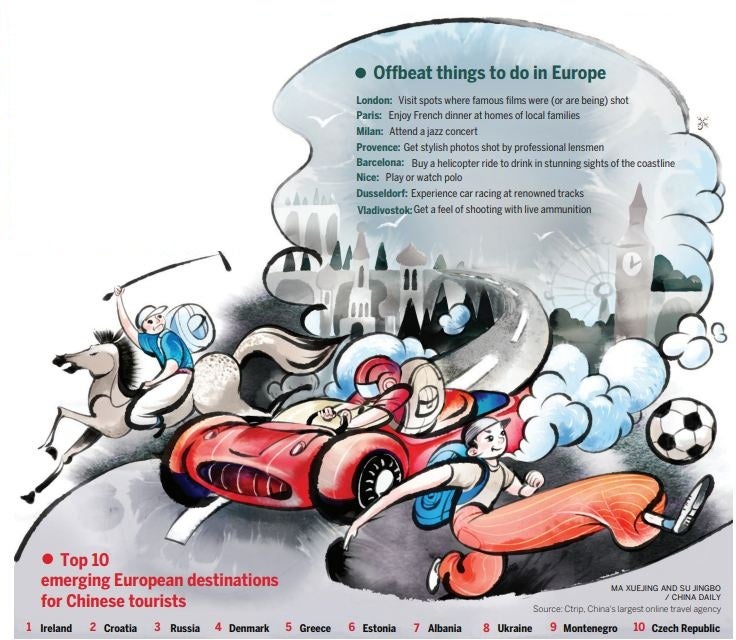 Marrying love of sports with tourism 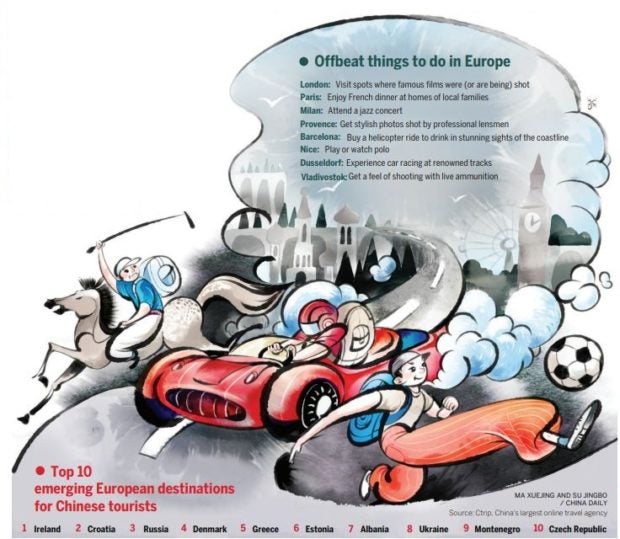 Tour agencies’ new products cater to travelers who crave for “in-depth overseas tours” that are linked to sporting events or destinations made famous by local sports teams, they said.

France and Croatia, which reached the finals of the soccer World Cup in Russia, have emerged as hot destinations for Chinese tourists in the run-up to the week-long National Day holiday in early October.

On their list of must-visit sites is State de France, located in suburban Paris. It hosted the 1998 World Cup final, which France won, and the European Champion Clubs’ Cup in 2000 and 2006.

Similarly, Zagreb, the capital of Croatia known for its love of soccer, and home to Dinamo Zagreb club, features on the list.

Chinese travellers’ online searches for the two landmark stadia surged during and after the recent World Cup, according to Ctrip, China’s largest online travel agency.

“The World Cup has helped the whole world to know Croatia. Huge demand to visit the country is building among tourists,” said Zou Yu, director of European business operations at Ctrip.

“Croatia has been a vacation spot for mature travelers in Europe, given its large number of cultural heritage sites. The TV series Game of Thrones was also filmed there. Compared with northern and western Europe, prices in Croatia are relatively cheaper. A glass of local beer sells for around 12 yuan ($1.76), and a cup of coffee costs 10 yuan, while a meal for two costs about 200 yuan,” he said.

Sports-minded tourists also love to spice up their travels with experience-enriching aspects. So, Chinese travel agencies are bundling unique activities with tours customized for such travelers.

For example, during in-depth tours in France, Chinese travelers can savor homemade French cuisine by visiting local residents. In addition, they can lock in memories by way of commissioned photography sessions in the lavender fields of Provence in southern France.

They can also experience polo in Nice, and be shown around Versailles by art experts who will double up as guides. From France, they can travel north to watch car racing at the renowned tracks in Dusseldorf, Germany, according to Ctrip.

The online travel agency said it has started offering such trips on its website recently.

Europe now attracts the second-largest bunch of travelers from China after the United States. Last year, Chinese tourists accounted for 14 percent of the visitors to Europe, according to Ctrip.

In the next couple of years, it is expected that 5.5 million to 6 million Chinese tourists will visit Europe annually, and their total consumption is expected to reach 150 billion yuan a year, according to Ctrip.

By 2020, globally, Chinese visitors are expected to go on 1 billion sports-themed trips annually, accounting for 15 percent of the total number of trips. The total consumption scale is expected to reach 1 trillion yuan, according to a forecast by China’s Ministry of Culture and Tourism.

The 2022 Beijing Winter Olympic Games are expected to become the next focal point for sports-themed tourism and related consumption. Both outbound travels and inbound travels are set to see a significant rise in market activity in the run-up to, during and after the Games, Ctrip said.

For example, many Chinese visitors would like to experience hot-air balloon rides in Cappadocia, Turkey, go parachute jumping at Pattaya in Thailand, try out scuba diving at some tropical islands, or go skiing in Switzerland.

Neil Wang, president of consulting company Frost &amp; Sullivan in China, said young Chinese consumers are increasingly pursuing diversified and personalized travel experiences. The change on the demand side has led to certain changes on the supply side.

Online travel agencies are trying to cater to individuals’ peculiar demands and requests and coming up with more types of travel products.

Shanghai-based online travel agency Lvmama said it will develop outdoor leisure-themed tour products and increase their number rapidly. Toward that goal, it is partnering with Internazionale Milano, a soccer club based in Milan, Italy.

Li Qiuyan, director of brand development department of Lvmama, said sports-themed travel is also a breakthrough in the upgrade of the tourism industry.

By June, sales of insurance products bundled with sports-themed tours on Huize have risen 36 percent year-on-year. Huize is China’s largest third-party online insurance services provider. Men accounted for 79 percent of sports; the majority of them were born in the 1980s, according to industry data.

Zhang Nan, 35, a bank employee in Beijing, said he went on a cycling tour with a few friends to three Spanish islands last year, rather than go on typical sightseeing tours to the country’s major cities and scenic spots.

Their six-day cycling trip cost about 18,000 yuan each, including accommodation on a boat but excluding flight tickets between China and Spain. He flew to Barcelona first, and then transferred to Ibiza island, and went out cycling 30 kilometers per day.

“This is the first time that I took a cycling trip abroad. Our 20-member group had three coaches. It was fun. And the constant training helped me to exercise a lot. I usually sit for long hours of desk-bound work in the office and don’t have many chances to exercise. So all that cycling was refreshing and broke the tedium,” he said.

“I also helped the crew members of the boat to set sail, and got to see beautiful views of the islands and enjoyed some really tasty seafood. These are all unique and special experiences. I wouldn’t have been able to visit the picturesque islands had I trodden the beaten path to major cities like Madrid and Barcelona.”