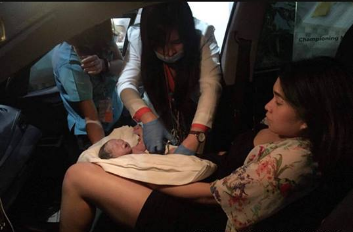 While most people dread the heavy traffic along EDSA during rush hour, one mom got a fulfilling experience she will never forget while stuck there in traffic, as she gave birth there to a bouncing baby girl.

Cheoui de Leon gave birth to her daughter, Sabrina Leaouis, nicknamed Saab, weighing 4.8 pounds on Friday night, Sept. 1. The baby’s birth was indeed unique since she came into the world while her mom was stuck in heavy traffic along EDSA, heading to Kamuning.

De Leon shared her experience on her Facebook account last Sunday. Her post has now gone viral, with 1,700 likes and reactions, and 780 shares as of this writing.

My birthing story:4.8lbs on September 1, 2018 at 7:30pmBorn in the car – Toyota Vios (labor along EDSA, gave birth along Kamuning Road 😂)Check photos for the story 😄

De Leon narrated that she had a baby shower at her home. She was already feeling contractions at an interval of two to three minutes interval. Her OB-gyne then advised her to head to the labor room of Dr. Jesus Delgado Memorial Hospital in Kamuning, Quezon City.

But while in the car, de Leon already felt that she would not make it to the hospital, as her baby was already crowning. She recalled, “My eyes went wide as I felt that she’s really ready to come out and I was shouting ‘Luis, lalabas na siya!! Di ko na kaya talaga (Luis, she’s coming out! I can’t take it anymore)!'” Luis Bernabe, per his Facebook page, is De Leon’s fiance.

Moments before arriving at the ramp of the hospital emergency room, the baby’s head was already out. Bernabe even tried to block the head as he was driving.

When they arrived at the ramp, Bernabe got out of the car quickly to catch their daughter as she slid out. The mom wrote: “Funny moment is when the guy who assist patients in the E.R. was stunned when Luis told him, “Kuya! Pakitawag yung nurse! Hawak na ng asawa ko yung anak namin!” (Sir! Please call the nurse! My fiancée is already holding our daughter.)

As EDSA is known for its horrendous traffic, de Leon told INQUIRER.net in an interview that they were supposed to take the inner route in Quezon City. They changed their minds after her dad informed her that cars were not moving along Doña Hemady Street.

Apart from her birthing experience, de Leon shared how Baby Saab got her distinctive second name: “The 2nd name (Leaouis) is the combination of mine and Luis,” she said. “I really dreamed to complete the vowels of her name.” Some friends even suggested to add such names as Karla, Via (from Toyota Vios) or Carla due to what happened.

And Sammy, de Leon’s firstborn, appears to already shower his little sister with affection. “He was very excited,” de Leon recalled about their first meeting. “Though hugger siya talaga kahit with other kids, but with his sister, gusto niya na agawin sakin just to hug her.”

(Though he’s already a hugger with other kids, but with his sister, he already wants to grab her from me just to hug her.)

Despite her breathtaking experience on the road, de Leon still views EDSA traffic as “one of the biggest problems we have.”

“I’m lucky that me and my baby are safe and still managed to get to the hospital,” she told INQUIRER.net. “But what about the other cases, yung mga emergency [vans] na naiipit sa (stuck in) traffic eh some cars or buses [don’t] care or give way man lang.”

Nevertheless, she is happy that her daughter entered the world healthy, adding that she will probably never get tired of talking to her about her unique birth.

When asked what’s her message to baby Saab, she said: “I will [give] you all the best in life. Your dad and I will do everything for you and your brother Samuel to have the best future.” JB

Pregnant New Zealand minister bikes to hospital to give birth