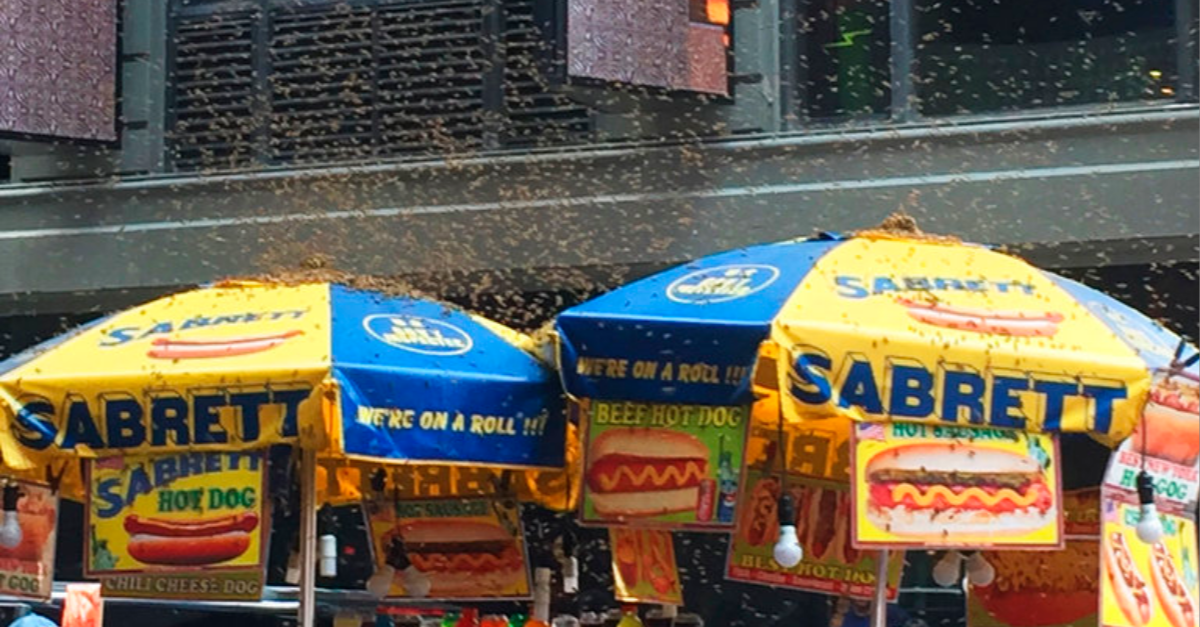 This photo provided by Elizabeth Yannone shows a section of a street in Times Square, cordoned off after being swarmed by bees in New York on Tuesday, Aug. 28, 2018. A swarm of bees caused a brief commotion in Times Square after they made their home atop a hot dog stand. The New York Police Department's bee keepers unit responded to the scene and safely removed the bees. (Elizabeth Yannone via AP)

When bees swarm into the city, who do you call? In New York City, it’s the police department’s beekeeping unit.

Tens of thousands of bees swarmed the umbrella of a hot dog stand on Times Square last Aug. 28, attracting a throng of onlookers.

Perhaps more than the bees, the beekeeper who arrived on the scene, Officer Michael Lauriano, made quite the buzz online.

Lauriano has a lot of love for bees: before his job as one of the unit’s beekeepers for more than a year, he has been raising honeybees for nearly five years.

One video shows him vacuuming the bees in protective gear as bystanders watch from behind barricades.

The New York Police Department’s beekeeper Twitter account, NYPD Bees, fielded questions from netizens who were surprised that there was such a unit and curious about why the bees were on the hot dog stand. Handling the account was Officer Darren Mays.

He explained that the NYPD’s beekeepers are full duty officers and attending to bee emergencies is only part of their job. “It’s the most elite place to bee, but it can get sticky sometimes!” he wrote.

Mays said that when bees are in an overcrowded hive and the weather is humid and hot, they will swarm into a new place.

It's a hot and humid day, and it can happen quite quickly – a cluster can form in 5 minutes. Just like us, they're only looking for a place to cool down. https://t.co/ZGRpdKJMk3

Swarming is a natural part of the life cycle of bees, in which the queen bee and thousands of worker bees leave their hive to make a new colony.

While looking for a new place to live, bees will stay in a temporary residence as some worker bees scout the area.

No one was stung during the operation, Mays assured. Bees are not interested in humans during that stage.

I cannot say it was a sting operation, because no one got stung😇 https://t.co/3lHyfiaiWn

But it seems they couldn’t find a new home, and so the beekeeping unit had to step in. The officers said that a low-power suction vacuum was used so no bees were harmed.

The bees have since been safely transferred to an apiary in Long Island.

Here’s an apiary where bees that are relocated and kept. We do take pride in removing and relocating our precious pollinators. Yes, the electric fence is to bear proof it from bears as well as curious human consumptionators. Did I just make up that word😂😂😂😂😂 pic.twitter.com/1MKuisgNI0

The beekeeping unit has been in existence since 1995 and covers five boroughs around the clock.

Both officers were busy as a bee that day: Aside from Lauriano’s swarm, Mays handled two in the city. But the special attention allowed the two men to meet for the first time after coordinating with each other for two years.

Did you all know that this was our very first time meeting each other? We’ve been in touch with each other for almost 2 years, but this is our first bee to bee meet. It was bee-loved at first sight. https://t.co/ZJuNwaPIV9

Mays said on their official Twitter: “It was bee-loved at first sight.” Niña V. Guno /ra