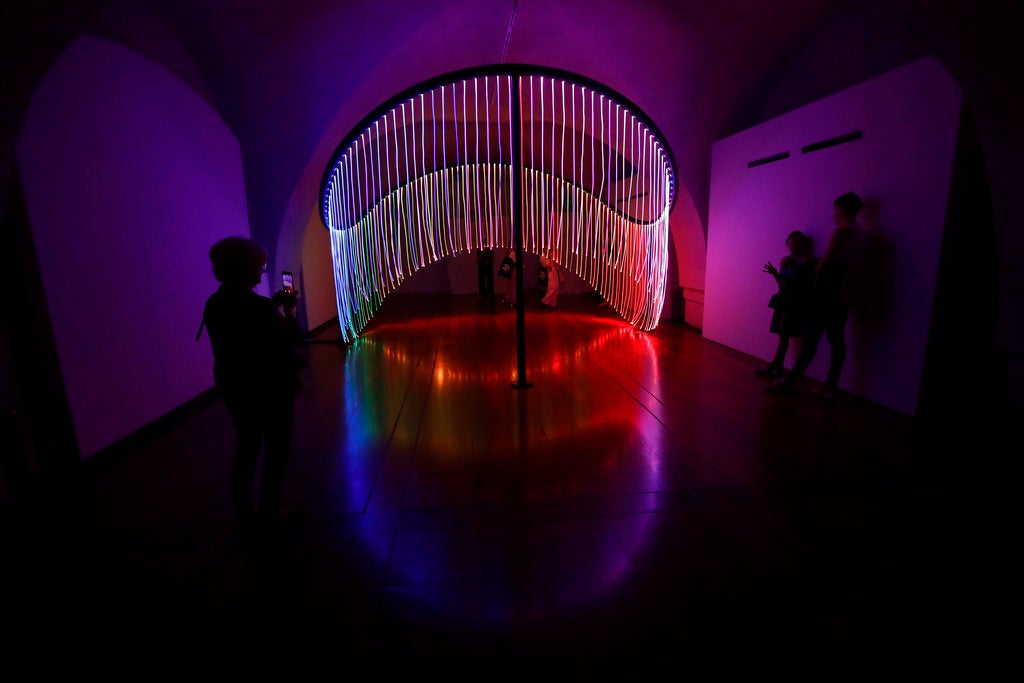 Visitors look at the Australia installation "Full Spectrum", by designer Flynn Talbot, which was inspired by Australia becoming the 25th country to legalise same-sex marriage in 2017, during a preview for the London Design Biennale at Somerset House in London, Monday, Sept. 3, 2018. The event runs from September 4 to 23. (AP Photo/Matt Dunham)

LONDON — Don’t judge by appearances. It’s an age-old piece of advice that is being roundly ignored by corporations, governments and law-enforcement agencies around the globe.

British police use facial-recognition technology to scan crowds for suspects. Owners of the latest iPhones can unlock their phones with face ID. Whole Foods and other retailers are testing facial recognition as a way of eliminating check-out tills in stores.

Modern technology means your face is both your identity and a commodity — but as an exhibition going on display in London shows, that technology is far from perfect.

“Face Values,” the U.S. entry at the multinational London Design Biennale, explores how computers’ ability to read faces is changing the world, with implications for privacy and individuality that we still don’t fully understand.

“We are on camera 50 times a day and there are all these software companies that are deriving information from us,” said R. Luke DuBois, one of the exhibition’s designers.

Curated by New York’s Cooper Hewitt Smithsonian Design Museum, “Face Values” includes two interactive pieces that explore the scope and limits of what technology can learn about you from your face.

Artist and computer programmer Zachary Lieberman invites visitors to sit in front of a screen as a computer maps their expressions, compares them to others’ and produces an analysis of the sitter’s emotion.

“It’s a kind of fingerprint of your facial expression,” said Lieberman, who has helped design an eye-tracking system for people with paralysis.

“This project involved a lot of trying to understand, how do you quantify expression?” he said at a preview of the exhibition on Monday. “How do you turn expression into numbers,” in order to compare one expression to another.

The limits of such technology become clearer in the accompanying piece by DuBois, director of the Brooklyn Experimental Media Center at New York University’s engineering school.

Visitors sit in front of a screen and are asked to display a specific emotion. Using technology similar to that deployed by some police forces, the system calculates the individual’s age, gender, race and emotional state. The results are both intrusive and sometimes inaccurate. One visitor, attempting to project calmness, registered as afraid. Another, asked to look disgusted, was told she appeared happy.

DuBois said the technology is only as good as the data that goes into it — and the sets of images that companies and organizations use to compare emotions are often inadequate.

The rules governing the use of such technology vary widely around the world. In China, facial recognition is being used with few restrictions for everything from advertising to law-enforcement. In the European Union, data-protection rules mean personal information can’t be collected without the subject’s consent. The U.S. has no such limits, although California recently passed a similar law.

DuBois says he wants to increase awareness about this powerful and fast-developing technology.

“In an older era — like 10 years ago — we should have been paying a lot more attention to what kind of data Facebook was taking from us,” he said. “And now it’s a little too late.”

Cooper Hewitt hopes to take its exhibit to the United States after its run in London.

The Design Biennale, which runs Tuesday to Sept. 23 at London’s Somerset House, includes exhibits from 40 countries, cities and territories under the loose theme “Emotional States.” They include Latvia’s birch- and pine-scented room, where visitors can write on a green wall of condensation; Australia’s rainbow-colored installation celebrating same-sex marriage; and Hong Kong’s room plastered with scratch-and-sniff wallpaper scented like roast duck, egg tarts, incense and opium. MKH