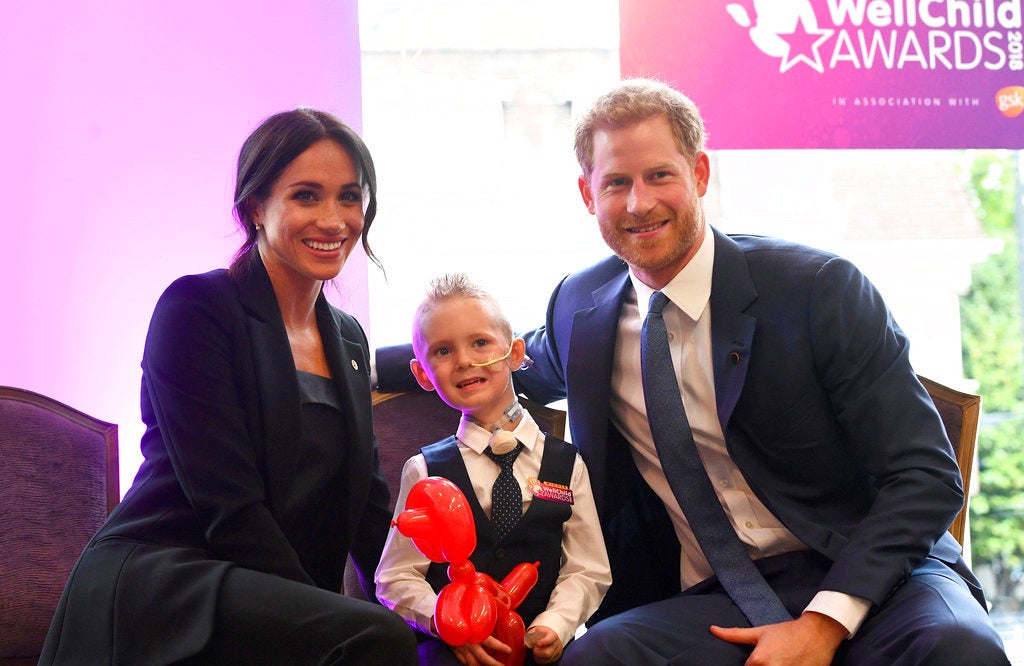 Britian's Prince Harry, the patron of the charity WellChild and his wife Meghan, the Duchess of Sussex pose for a photo with four-year-old Mckenzie Brackley, during the annual WellChild Awards at the Royal Lancaster Hotel in London, Tuesday, Sept. 4, 2018. The couple attended the annual WellChild awards Tuesday for the charity, who help to get seriously ill children and young people out of hospital and home to their families. (Victoria Jones/Pool Photo via AP)

Being in the British royal family means being in the public eye while also keeping personal details out of reach.

But all it took for Prince Harry and Meghan to dish on their favorite Disney movies was one child whom they met during the WellChild Awards held Tuesday, Sept. 4.

WellChild is a UK organization for seriously ill children and their families. The awards recognize youth who have serious illnesses and the people who care for them. Harry has been a patron of the charity since 2007.

Chloe Henderson, 10, told the royals she had to ask them a question, People reports: “What’s your favorite Disney film?”

The Duke of Sussex said it was “The Lion King,” while his wife replied that she has “always loved ‘The Little Mermaid.’”

Incidentally, Prince William also revealed to a child at an October 2017 charity event that he and Prince George enjoyed “The Lion King” and that the young prince had also seen Lego movies.

“Zootropolis”—known in the US as “Zootopia”—as well as “Moana” were some of the couple’s top picks too, reported The Daily Mail.

Henderson has cerebral palsy and is unable to walk. She dreams of becoming a ballerina, and is the first disabled child in the UK to pass the pre-primary ballet exam at the Royal Academy of Dance.

Perhaps this is why Meghan suggested the animated movie “Ballerina,” revealing that Harry enjoyed it because the protagonist has red hair.

The other children the Duke and Duchess of Sussex met with had conditions ranging from spina bifida to Panenteric Crohn’s Disease—but all with bright and strong spirits.

Evie Toombes, 16, commended the couple for spending time with each recipient. Toombes has spina bifida and has remained a show jumper even if she feels her legs are tired and numb. She said Meghan went through her children’s book on disability and genuinely seemed interested in it.

She said that thanks to the visit, “all the award winners felt really special.”  Niña V. Guno /ra

Guess who’s the favorite British royal of the palace staff?