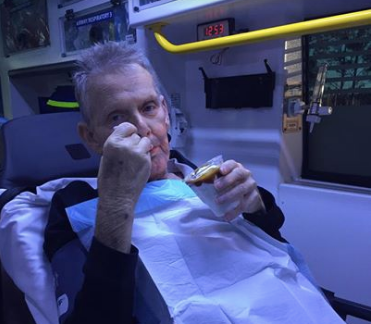 During his final hours, 72-year-old Ron McCartney from Gold Coast, Australia just had one last wish — to eat ice cream.

The Queensland Ambulance Service (QAS) first shared its experience with McCartney on its Facebook page Tuesday, Sept. 4. It read that his wife Sharon called an ambulance for his final journey to the hospital, with two paramedics, Kate and Hanna, responding to the call.

Sharon said McCartney had barely eaten anything over two days, according to the post. Paramedics then asked if he would like anything, to which he said he wanted a caramel sundae.

McCartney’s wife then sent a message to the ambulance, thanking them for the joy he received from a simple request, and for taking care of him for the past few months.

“We have been left humbled and tinged with sadness after receiving a message of gratitude that underlines an often-unseen aspect of patient care; the caring,” the post stated.

The man’s daughter, Danielle Smith, also extended her gratitude to the two paramedics. She wrote, “Dad enjoyed this so much and was the last thing he was able to eat by himself.”

McCartney passed away on Saturday, Sept.1.

“It put a smile on his face, he got a couple of pretty girls conned again,” Sharon told ABC News on Wednesday, Sept. 5. “Got what he wanted. He’ll never say no to a caramel sundae.”

And as she once again thanked the ambulance staff for taking care of her father, Smith pointed out that they made him feel special. She said in the report: “He meant something, he wasn’t a number.” Katrina Hallare/JB

Till death do us part: Groom couldn’t make it to reception