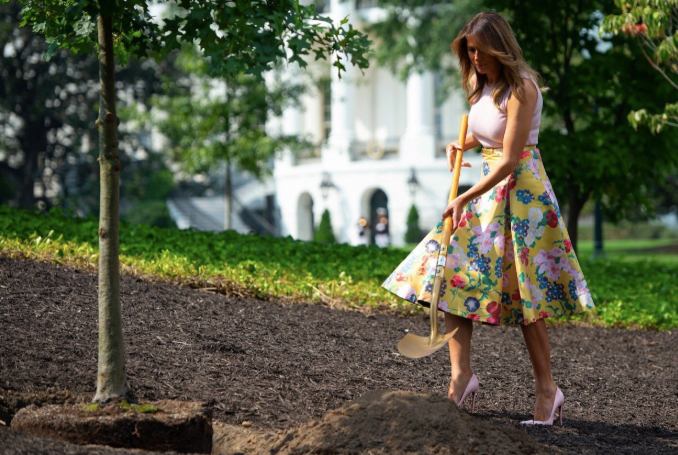 High heels are an essential part of some women’s wardrobe. This type of shoe is so classic that the United States first lady Melania Trump must have thought it alright to plant a tree wearing a pair — albeit, she now became the subject of ridicule by critical netizens who found her fashion statement during the tree-planting event quite absurd.

Trump, who donned a knee-length floral skirt which she partnered with a pastel pink sleeveless top and matching pastel pink Christian Louboutin stiletto heels, planted a sapling from the Eisenhower oak on the White House’s South Lawn on Aug. 27.

I had the honor to contribute to the beautiful & historic @WhiteHouse grounds today by planting a sapling from the Eisenhower Oak. Thank you to @WhiteHouseHstry for organizing the #PresidentialSites and to the previous first family descendants who joined us today. pic.twitter.com/uqzKxNbL9H

Her “gardening outfit” did not sit well with netizens. In Reddit, a “Photoshop Battle,” which is a contest for the best-edited images, was launched to mark the occasion.

One Reddit user, SplendidCoffee0, re-imagined the photo with Trump appearing to be burying the Statue of Liberty.

Another cut Trump’s figure, editing her on top of what looks like a slice of tiramisu cake.

One Reddit user reimagined the scene as Trump’s daydream.

While Twitter users did not hold a photo-editing contest, they did have their share of fun on the matter, through hilarious posts that cite Trump’s new gardening fashion line, to her “pretend-play glamor gardening.”

Dahlinks, look at ME, Melania, gardening with dirt. I look so beyootifull don’t I? ❤️💋💕 Alvays wear heels for making garden my dahlinks! pic.twitter.com/yYyibBKUj4

Melania is launching her new line of Gardening Attire, accompanied by the standard 4-inch heels 😀. pic.twitter.com/bAFC8kggBt

You guys, Melania stood on dirt today for the first time 😂😂😂 pic.twitter.com/rX7okFjPKt

Some pointed out that Trump’s heels are beneficial, since they help aerate the ground.

With those shoes, why didn’t you just aerate the entire grounds?

One Twitter user took inspiration from the ongoing Reddit Photoshop Battle, editing Trump’s shoes in three different ways — as red high-top Converse sneakers with the word “Trump” printed on the side, as what looks like pink dragon’s feet, and as orange cowboy boots.

“Everyone’s ragging on Melania for her choice of gardening shoes so I’ve put together a few suggestions for more practical and meaningful footwear, since she likes expressing herself with clothes,” wrote the Twitter user.

everyone's ragging on Melania for her choice of gardening shoes so I've put together a few suggestions for more practical and meaningful footwear, since she likes expressing herself with clothes. pic.twitter.com/jvTlIgqznH

Another Twitter netizen, JCaro (@jfistacuffs), posted a side by side photo of Trump and the former U.S. first lady Michelle Obama while gardening. While Trump is glammed up, Obama wore a simple t-shirt, pants and sneakers, which looked more comfortable and suitable for gardening.

Melania Trump just went "gardening" at the White House. Compare it to this picture of Michelle Obama doing the same. See the difference? That's the difference between the two parties… pic.twitter.com/NMQmTJoUNr

This is not the first time the First Lady was criticized for her gardening attire. Last month, photos of her planting and harvesting vegetables in September 2017 circulated in social media. Netizens poked fun at Trump after Chrissy Teigen, who is an outspoken critic of Trump’s husband, pointed out how clean Trump’s low cut Converse pair were.