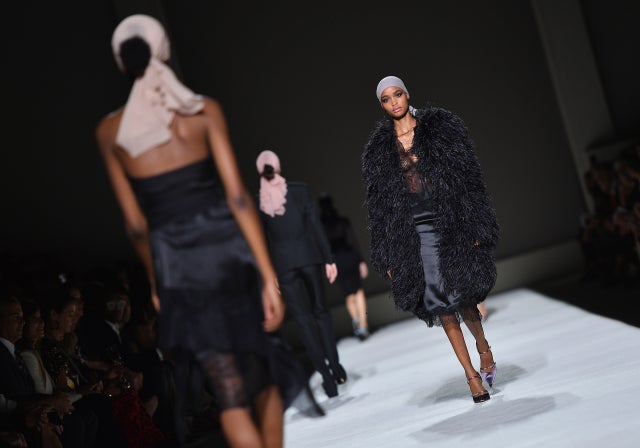 The US city kicks off a month-long fashion merry-go-round in which editors, celebrities and influencers descend first on the Big Apple before jetting off to fashion weeks in London, Milan and Paris.

Everyone from the biggest names in the industry to fresh-out-of-college hopefuls will pack a frenetic schedule from Thursday to Sept. 12 as the Big Apple wilts under a late summer heatwave.

For men, the trademark Tom Ford suit was fashioned into candy colors and metallics, paired with block shades and a traditional mac.

Hemlines fell below the knee with delicate lace detailing, and there was double-breasted black pant suit for evening that wouldn’t look out of place on Meghan Markle, the newly minted Duchess of Sussex.

It’s no longer news to say that the traditional runway show is in flux, but September’s edition of the bi-annual style fest serves up a smattering of treats after several seasons in the wilderness.

Kate Spade will show on Friday, the first since the label’s founder ended her life in June, with a tribute to Spade expected.

Barbadian superstar Rihanna steals an honor customarily enjoyed by Marc Jacobs, by closing out the week with a Savage x Fenty bash to baptize her brand-new lingerie line.

Then there are the New York anniversaries: Ralph Lauren is marking half a century of collections in Central Park with a fashion show and gala dinner that is strictly A-list only.

The location is the Bethesda Terrace fountain — a popular movie scene stealer — and the event a homage to the city where the 78-year-old designer was born, grew up and built his fashion empire.

Rodarte and Proenza Schouler are back from Paris. Vivienne Westwood is hopping across the pond for buyer appointments only.

Marchesa, the red-carpet label co-founded by the estranged British wife of disgraced movie mogul Harvey Weinstein, is also back — by appointment only — after cancelling their show last season.

Others are sitting New York out. Ex-Spice Girl Victoria Beckham is celebrating the 10th anniversary of her brand in London.

Tommy Hilfiger held his show in Shanghai on Tuesday, the latest pit-stop on what has been a global tour since declining to show in the Big Apple since September 2016.

Alexander Wang, the king of cool, has switched to a June-December schedule and plenty of others make little secret of their a thirst for something new in a city that constantly glorifies innovation.

“What we know traditionally as fashion week — and I love a runway show — is changing,” designer Zac Posen told CNBC this week.

“It’s a very saturated field, so you have to find interesting creative ways of cutting through the market.”

Swatch makes up for lost time with record sales