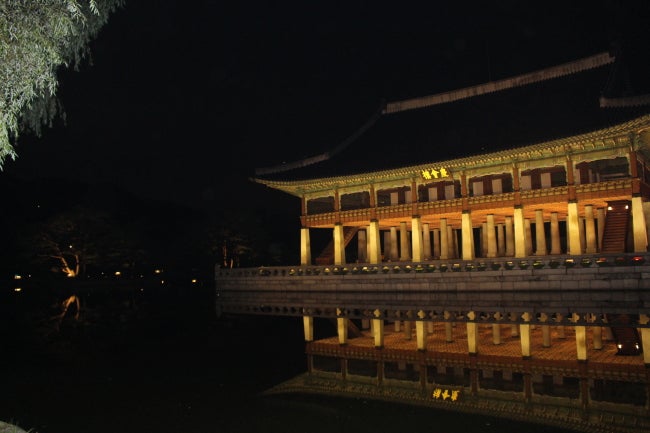 SEOUL — For commoners in the Joseon era, what went on within the confines of the royal palace and the lavish lifestyle of the royal family was a source of mystery and wonder.

The ongoing biannual Gyeongbokgung Starlight Tour, which continues until Sept. 15, offers a peak at a typical night at the main palace of the kingdom during the reign of King Sejong the Great.

A preview of the tour was held at 7:30 p.m. on Aug. 30, after the official visiting hours ended. The idea of the tour was that the king had invited the visitors for a feast and tour of the palace.

“This year we created the tour based on the story of King Sejong and Jang Yeong-sil, so that the visitors would feel like they are actually in the palace in the Joseon era,” said Kim Hyun-mo, vice administrator for the Cultural Heritage Administration. Jang Yeong-sil was an official in charge of science during Sejong’s reign. He designed the sundial, water clock and other devices for the king.

Entering the palace, visitors were greeted at the Geunjeongjeon building, which was used for many state-level events, including conferences of the king and high-ranking officials, welcoming events for foreign envoys and coronations. The golden dragon, symbolizing the king, hung from the roof of the building.

A guide dressed up as a Joseon-era palace worker provided the commentary.

As it with most structures inside the palace, the pavement leading to the building is divide into three sections, with the center reserved exclusively for the king and queen.

Next on the tour was Donggungjeon, with Donggung, or “east palace,” referring to the crown prince.

There the actor playing the role of the crown prince — who would later become King Munjong — was seen discussing the matter of an ongoing drought with his officials.

“With all due respect, your highness, all the sites in which irrigation facilities can be installed have been developed already,” the officials were seen reporting to the prince, who went on to engage in a furious debate with them.

Royal guests were then led to the Sojubang, the palace kitchen, where they were served a 12-course meal.

That meal was accompanied by the performance of fusion gugak, or traditional Korean music. According to palace officials, the repertoire for the 40-minute performance differs each night.

The tour continued onto Gyotaejeon, the queen’s quarters and the most beautiful building in the palace. The window of the building opened to tell the love story of the royal couple in sand art.

Outside Gyoteajeon, visitors came across Jang Yeong-sil, the most famous Joseon scientist, as he explained the workings of his latest invention to government officials.

“Halt! Who goes there,” shouted royal guards as they stopped visitors dead in their tracks. After a tense moment when the guide talked to the armed guards, the soldiers announced that they would escort the group to Gyeonghoeru Pavilion.

Gyeonghoeru in the moonlight is one of the most magnificent sights in all of Korea. Unlike during the day, visitors can go inside the building once used to hold state banquets.

The pavilion was available to high-ranking officials, who had to enter through the smallest of the three doors. The second biggest one was reserved for the royal family, while the main gate was only to be used by the king and queen.

Tickets for the dining event and Starlight Tour can only be booked online via Auction.

For more information on the event, visit www.chf.or.kr/en/c5/sub1.jsp.