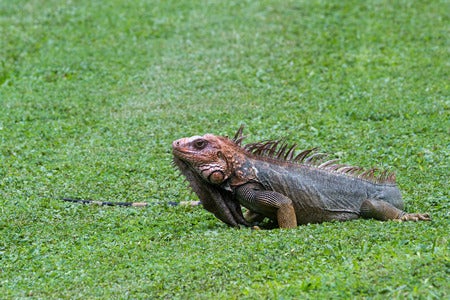 Tourist finds iguana in her bikini top after Mexico trip

One woman did not expect taking home an iguana with her when she got back from her vacation in Cancun, Mexico. To make things weirder, she found it in her luggage, particularly in her bikini top.

According to the Peninsula Humane Society & SPCA (PHS/SPCA), Blair Fingerhut from Foster City, California found the creature while unpacking her luggage, KTVU reported on Tuesday, Sept. 4.

“She had put her bathing suit out to dry on the balcony of her hotel room, and the next morning, packed up her belongings in her suitcase,” PHS/SPCA communications manager Buffy Martin Tarbox said in the report.

The woman left Mexico on Friday, Aug. 31, but it was only two days later when she decided to unpack. Tarbox added, “When she was unpacking, she noticed this iguana had made its way from Mexico with her.”

When Fingerhut reported the presence of the reptile to the PHS/SCPA, the group had to treat it for dehydration. “It was a miracle that it survived all of those elements,” Tarbox said of the iguana’s condition.

The PHS/SPCA reached out to the California Department of Fish and Wildlife and the United States agriculture department to determine the best action for the iguana, the report said. It was later decided that the animal will be kept in a sanctuary.

After the incident, Fingerhut took it upon herself to transport the iguana to the sanctuary. Tarbox said in the report that she felt so bad, even though it was not her fault, adding, “She became very invested in this little guy.” Katrina Hallare/JB