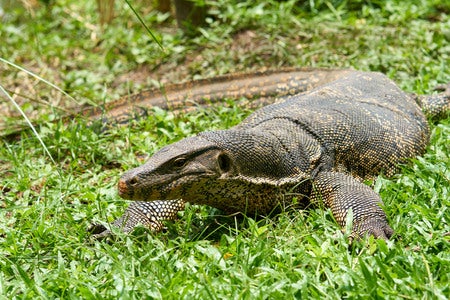 It appears that Zach Lieberman’s home has an unexpected and unwanted guest—a massive lizard.

“He’s every bit of 6-feet and every part of 100- to 150-pounds. He’s a monster,” Lieberman described the reptile that has been terrorizing his home in Davie, Florida, to the Huffington Post last Aug. 31.

“My wife was walking by our sliding glass door and let out a pretty loud scream,” Lieberman was quoted in the report. “I ran over and looked out the shades on the door and, lo and behold, Godzilla’s smaller cousin was right there. It was alarming to me and terrifying to my wife and kids.”

He tried numerous ways to lure the reptile—identified as an Asian water monitor—into his garage. “[I]t got a little aggressive,” he said. “He apparently got hip to my idea, turned on me and took off running. It was a full-on sprint. I’d thought this was a slow creature. Man, it’s not!”

Lieberman added that his kids, aged 2 and 4, were not able to go out to their backyard as the reptile “could dart out in an instant.”

The Lieberman family reached out to the Florida Fish and Wildlife Conservation Commission, which has been trying to catch the animal for days. Luckily, Martin County Trapping & Removals and Martin County Wildlife Rescue owner Mike Kimmel was the one who could save the day and traveled to the Lieberman home.

Kimmel revealed that the wildlife  conservation was supposed to euthanize the animal. “I knew I could find a home for him, and I really wanted to preserve his life,” he said.

It also appears that the monitor has an owner, Lieberman and Kimmel said. Kimmel added that he spoke with the supposed pet owner. “He told me its name is Bamboo and it escaped a few weeks ago. He said he kept it in his pool and that he has three others as well.”

On Aug. 28, Kimmel tried to finally lure the animal toward him. Unfortunately, it rained, making the situation harder for him as monitors prefer sunny weather.

And determined not to give up, Kimmel promised to return in the weekend to finally catch the monitor. “People need to leave it to the professionals,” he said. It is still unknown if the monitor was finally caught, as of this writing.  Katrina Hallare /ra