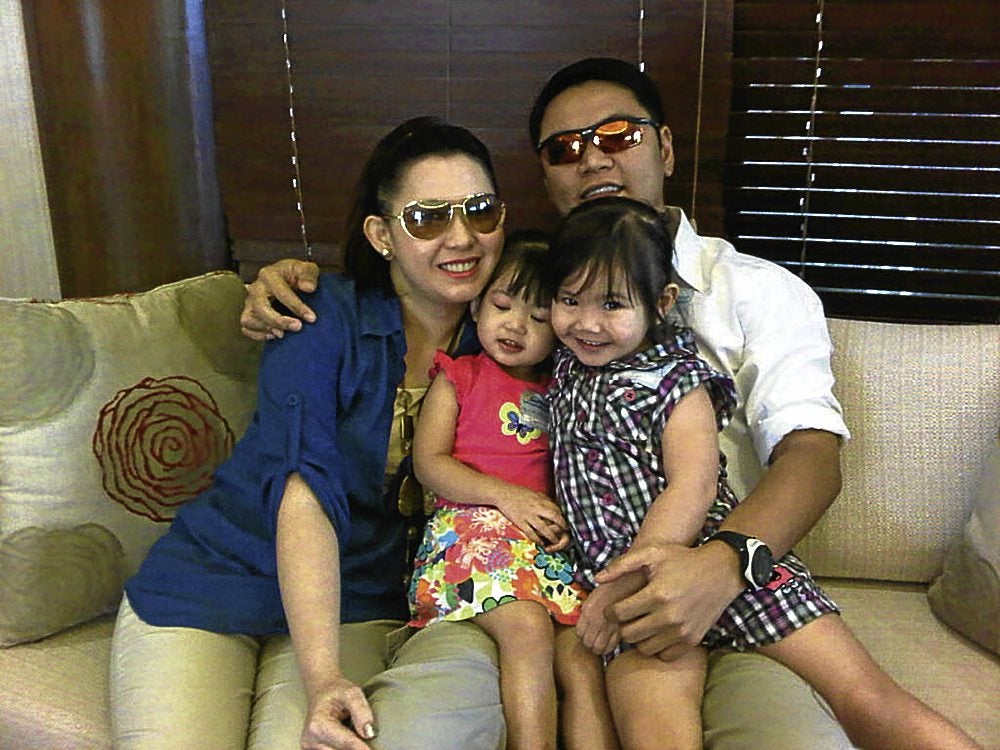 On a typical morning in the home of Rommel and Catrina “Cat” Ramos  in Taguig, Rizal, a little girl is painting.

She has spread out a sheet of pastel paper on the coffee table, and with confident  strokes with her brush, produces, in 20 minutes, an abstract painting. The colors are rich and bright—shades of blue, violet and pink.

What is it, she is asked. She holds up the piece, her eyes bright, and she smiles, looking up at her appreciative parents. “It’s a fish,” she says.

The  painting, in acrylic, is delightful, as  are the 40 framed pieces stacked around the living  room and readied  for mounting  for a one-girl show at the LRI Gallery on  210 Nicanor Garcia, Bel Air II, Makati, on Jan. 20-21. Framed, the paintings look professional and done by an adult visual artist.

One can hardly believe they’re by a three-year-old girl, Arianna Ramos. And she hasn’t even gone to nursery school yet.

Arianna is without a doubt a prodigy, and she’s not even aware of it. She’s a charming toddler who likes to dance, with her pony tail swinging, and sing nonstop pieces from “Sound of Music” and other musicales.  Aside from her artistic gift, what sets her apart from other girls her age is that she likes to eat vegetables, particularly okra.

That’s why her mother, a health-conscious young woman, serves vegetable dishes like monggo, malunggay and pinakbet.

When Arianna was two years old, her  mom, Cat, a management consultant, enrolled her in My Masterpiece, a private toddlers’ play school in a private subdivision in Pasig. The teachers coached the children to  sing, dance, and do some arts and crafts, like putting beads together. She quit school to be tutored in painting at home.

It was her grandmother, Mildred Ramos, managing partner of Reyes Tacandong & Co., who taught her to hold a pencil and pen properly when she was just a baby. She was barely two when she was given water color and acrylic, and to everyone’s pleasant surprise, she took to painting shapes and figures just naturally. Her lola  treasures  some of her earliest works and displays them in her home.

Arianna’s motivation is due to her parents’ being very supportive. Rommel and Cat are again demonstrating their parenting style by encouraging their second daughter, Alessa, who is under two years old, and starting to make her own color pictures like ate. The couple clap their hands and say, “That’s good, Alessa, keep it up.” There’s no sibling rivalry between the two girls.

Last year, Cat contacted Jerome Malic, a full-time painter who has participated in around 50 group shows and is a member of the Saturday Group of Artists, to tutor Arianna at home.

Jerome spends some three hours with the budding artist three times a week, initially guiding her with color combinations and deconstructing images, like, says Jerome, showing that a circle can become  a sun, or a triangle the roof of a house. “She uses one color to start with, and I suggest what other colors go together.

“For example, she likes the color blue. I try to make her combine blue with other colors, like orange, so her work will not look gloomy.” Arianna would listen, then  proceed to do combinations on her own.

Arianna uses pastel paper and regular sketch pads, acrylic paint, poster paint and Craypas. Jerome says her “simplicity of colors remind me of Mark Chagall.” Arianna, says Jerome, has “great potential. She has an eye for colors and shapes.”

Like other children, she can be impatient; like in the middle of painting, she stands up, runs about the living room, plays with toys, and eats (inviting her teacher to eat with her). Then she goes back to work.  She knows when to stop. She pushes away her work, declares, “It’s finished,” then starts on another sheet of paper.

Arianna is the youngest Jerome has tutored, the others being five years old and above. But already, Jerome finds Arianna  to be confident about her art.

She doesn’t copy figures, flowers or Christmas trees. She simply creates expressionist pieces, as her young mind and hand tell her to.

The child prodigy is headed for greatness. Her parents are ever encouraging, showing appreciation each time she finishes a piece. There are scores of them, but the best 40, as chosen by the parents, are going to be for sale at the show. “She has no titles or even an idea on what to draw,” says her father Rommel, in his early 30s, an Ateneo law graduate who is now running the family security agency.

Rommel is happy about having his own business and not working for a law firm, because that gives him more time to be with Arianna and Alessa. He waits for Arianna to finish her lesson before leaving for office.

Rommel says no one in his family, nor in Cat’s, is a painter. Cat’s mother, Yoly Aguilar, however, has been collecting paintings of such masters as Malang, Legaspi and Ang Kiukok, and distributed some pieces among her three children. In Cat’s house are works by Remy Boquiren, Pilar Belleza, Manny Baldemor and Doronia.

Although Arianna does not yet appreciate the paintings on her parents’ walls, Rommel and Cat believe that taking her along on trips to Hong Kong, Macau, Bangkok, Singapore, Boracay and Batangas  exposes her to artistic and natural environments.

The couple allows Arianna to do what she wants to do. Rommel says, “We’re not forcing her to paint, we let her paint when she wants to. Lately, she said she would like to take ballet lessons. That’s fine for Cat and me.”

On Arianna’s first birthday in 2010, after the onslaught of typhoon “Ondoy,” the couple asked their invited friends to give, instead of gifts, old clothes, medicines and bottles of water, which were distributed by the St. Michael Parish to communities   severely affected by the floods in Taguig.  “We were so touched, so many goods were donated by our friends,” recalls Cat.

On Arianna’s second birthday, they decided to hold a party at the Barangay Pagibig orphanage in Barangay Orambo. Gifts received were not only for Arianna, but for the orphans, who enjoyed the games organized for them.

For Arianna’s third birthday, the couple decided to donate all the proceeds of their daughter’s painting exhibit sales to the pediatric ward of the Philippine General Hospital (PGH), with the initiative coming from Arianna herself. “We were watching television one time,” says Cat, “and Arianna saw footage of children in the charity ward. She asked why they were alone, and they looked sad. I said maybe their parents could not be with them because they had no money. Arianna said, we should give them money.”

That’s when the Ramos couple decided to donate the exhibit’s proceeds to the ward, to be coursed through the Child Foundation Inc. The pediatrics department head, Dr. Carmelita Padilla, will be on hand on the first day of the exhibit, which is reserved for family and friends. The next day, Jan. 21, the paintings will be open to the public.

“We’re inviting the public to see the exhibit and, hopefully, help us raise money for the indigent children at PGH,” says Cat.

The paintings will be priced affordably. But they will be priceless, considering the age of the painter, and the intention of the exhibit.