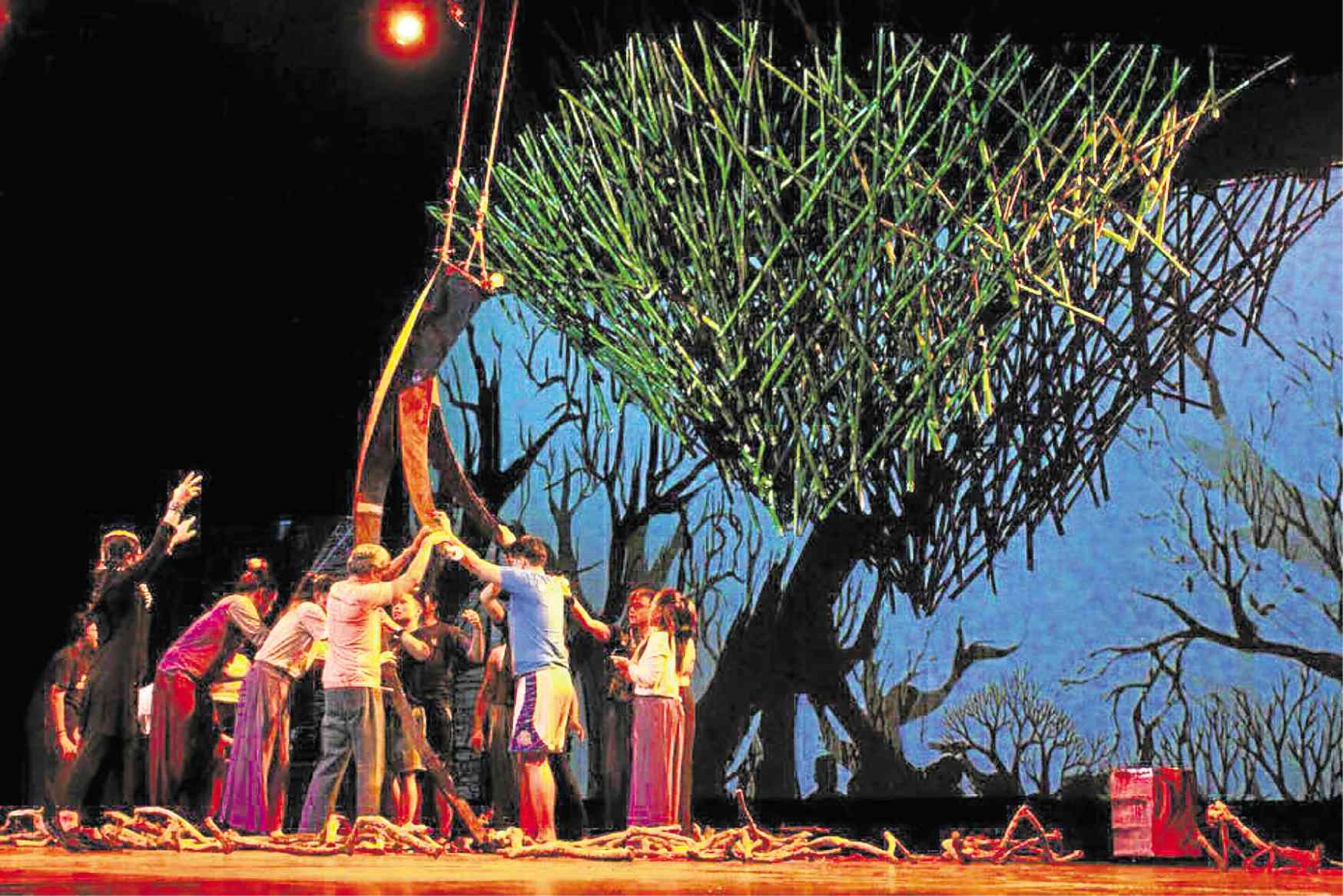 Scene from Tanghalang Pilipino’s “Balag at Angud,”written by Layeta Bucoy and directed by Audie Gemora, with music by Dodjie Fernandez and Upeng Fernandez —PHOTO FROM TANGHALANG PILIPINO’S FACEBOOK PAGE

Tanghalang Pilipino’s new musical, “Balag at Angud,” which runs until Sept. 16 at Cultural Center of the Philippines’ Tanghalang Aurelio Tolentino, covers the art-making career of Luis Yee Jr., otherwise known as Junyee. Known for his protest art and his use of found objects, the now-75-year-old installation artist saw himself moving from one place to another, encountering resistance every which way as he sought to continue satisfying his insatiable urge to create.

Thankfully, “Balag at Angud” isn’t interested in simply reporting facts about his life; it celebrates the creative process as a noble pursuit, placing reproductions of his work front and center and underscoring Junyee’s journey with a vibrant, optimistic score.

Director Audie Gemora and set designers Toym Imao and Marco Viaña forgo taking a realistic approach to setting and instead build the musical’s world out of Junyee’s very installations. This is a production situated in the ever-shifting mind of an artist. So as the artist ventures from child, to teenager and to adult (played by Dune Michael Garcia, Paw Castillo and Rody Vera, respectively), his art is manipulated and moved around, serving as a map of where he’s been and as markers of his current progress.

Gemora and choreographer Ava Villanueva stage the production’s various musical numbers around these artworks in such a way that every movement brings his works into fuller completion.

That “Balag at Angud” places more importance on Junyee’s process than the dramatic events of his life might run the risk of alienating viewers who don’t know what it’s like to be a struggling artist. But Layeta Bucoy’s script takes its time explaining why the artist feels he has to make art more than anything—without ever reducing him to a desperate idealist. Bucoy portrays him as a man who constantly finds ways to help others—

be it in the seedy Palace Hotel, in a morgue as a makeup artist, or as an established practitioner struggling to find materials.

To see Junyee’s definition of art evolve through time is the production’s greatest joy.

However, with Junyee  still alive and well, “Balag at Angud” has difficulty finding a convincing dramatic ending that still remains truthful. The second act lacks the sadness and pain of his days as a young man (days when he had to deal with marital law and death in the family), and it doesn’t possess the same level of exhilaration as the production’s flashbacks to his childhood.

Bucoy attempts to focus Junyee’s later years on his relationship with his wife, Marites, and the threat of death, as represented by the ghost of his father. Unfortunately, the facts get in the way: Knowing that Junyee and Marites are both alive removes any tension from the musical’s conclusion.

Thankfully, this somewhat anticlimactic ending doesn’t negate “Balag at Angud’s” entire journey. Unable to find an ending in its real-life subject, it hopes to find a fitting conclusion in any viewers who have ever aspired to create something of their own—as represented in the actors’ performances.

Castillo’s starry-eyed enthusiasm and defiance leads to moments both heartbreaking and inspirational. Meanwhile, Rody Vera’s portrayal of an older Junyee still bristles with excitement, even if his aging body won’t allow him to express it.

But no one else steals the show from Bayang Barrios, whose fleeting, ethereal performance as Junyee’s muse injects the artist’s life with a deep sense of spirituality and divine inspiration. Barrios also provides the strongest voice for the musical’s score, which regularly shifts from being grandiose and overwhelming to being playful and romantic.

No matter the musical influences the production plays with, the songs, composed by Dodjie Fernandez and Upeng Fernandez of the musical group Patatag, remain fundamentally simple. The music is often rooted in the use of indigenous instruments, which helps keep the musical itself grounded in Junyee’s childlike wonder for art, and his optimism that artists can and do change the world.

So often do we get narratives about the constant turmoil artists have to endure. What a joy, then, to have one that wants us to revel in its beauty. —CONTRIBUTED