How grannies are enjoying the age of apps | Inquirer Lifestyle ❮ ❯ 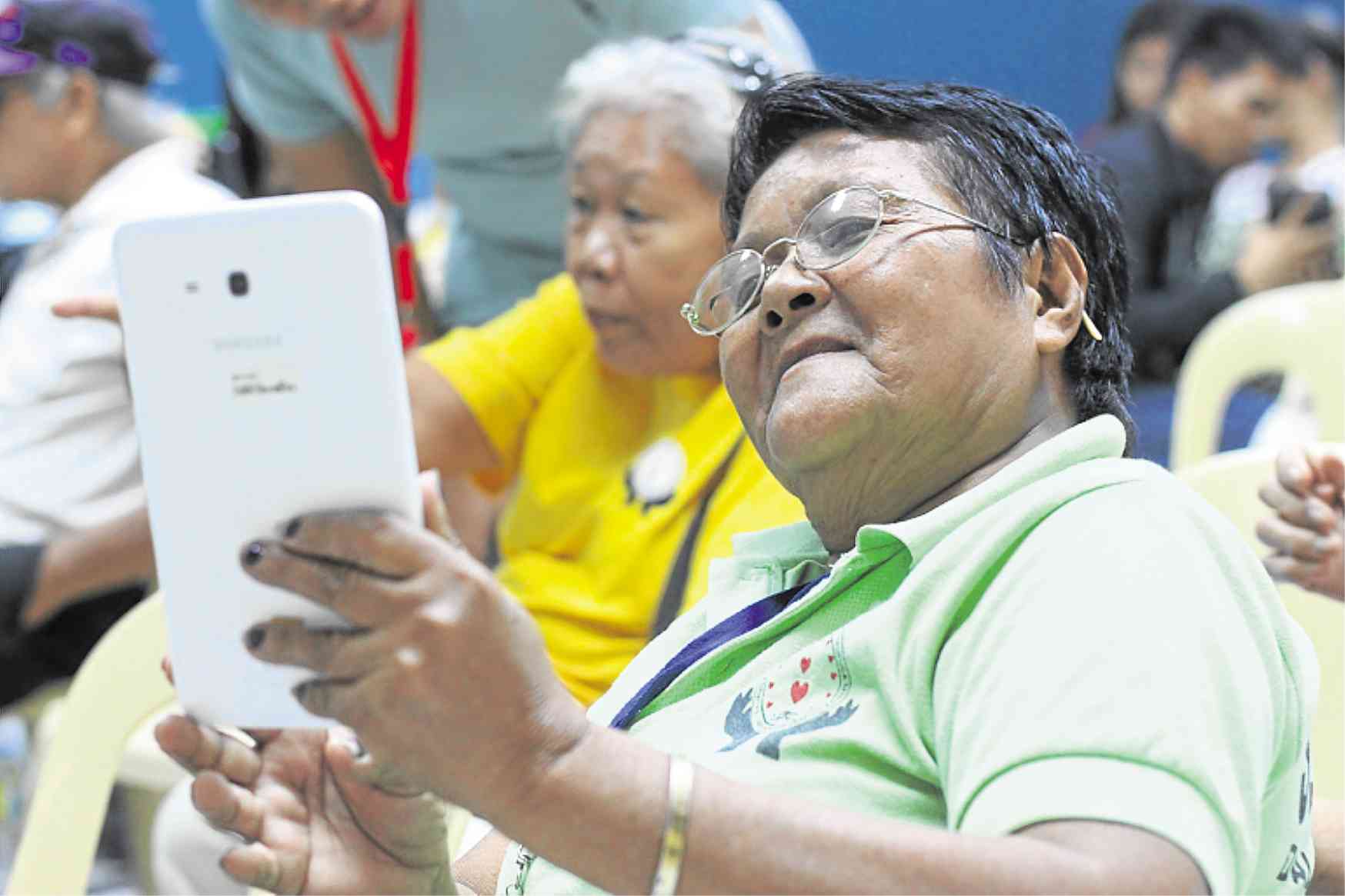 Dorina takes a selfie and posts it on Facebook

How grannies are enjoying the age of apps

The use of social media has been so widespread it is transforming even the way barangays serve their members.

In Barangay Fortune, Marikina, senior citizens, in particular, are discovering the wonders of tech-driven communication.

Romy Silva, the barangay kagawad who is on top of senior citizen initiatives in his community, is enthusiastic about being able to coordinate activities more efficiently, with the elders knowing how to use Facebook Messenger.

“Instead of having to text them one by one, I simply send one message to a group chat where they all participate,” said Silva.

A senior citizen himself, this retired teacher is tech-savvy: He can be reached via chat apps on his smartphone, and he is almost always connected, thanks to his pocket Wi-Fi.

His regularly updated Facebook feed is also a resource for those who want to know more about the activities of the barangay and city government.

“I want to be reachable at all times, so I can help my fellow elders with their problems,” he said, adding that their concerns range from pension to health and other personal matters.

“I believe that it is important for senior citizens to keep learning, and I hope that together we can learn more about new technology like smartphones and social media,” he said.

To help its seniors get more comfortable with smartphones, mobile data and social media, the barangay teamed up with Smart in transforming seniors into “millenniors” or seniors who are tech savvy like millennials.

The telco developed a program to guide them in the proper use of smartphones and instruct them about mobile data, social media and online video streaming.

Since its launch last year, dozens of senior citizens across the country have been keeping pace with technology.

Dorina Naldo, secretary of Barangay Dalipuga Seniors’ Association in Iligan City, is among the graduates of the Smart Millenniors program held recently in their city. She used to be indifferent to gadgets and social media, but now she is a regular YouTube user.

“I never imagined I could listen to songs of my favorites, Victor Wood and Tom Jones, which are seldom played on radio these days. The best part is, I can play them anytime,” she exclaimed.

“I log on to Facebook and catch up with my grandchildren and their ‘millennial’ things,’” said Paz Pangilinan of Barangay 734 in Paco, Manila, where the Smart Millenniors program had its pilot run last year.

A smartphone and social media have spared Virginia Pangilinan, 80, and Lila Cos, 60, the strenuous road trips just to see family members living elsewhere.

“Thanks to Facebook, I can now talk more often to relatives abroad whom I haven’t seen in a while,” said Cos, who joked that she has been losing sleep chatting away into the night with family members in Japan.

“Facebook has allowed me to share my love for my grandkids to the world,” said Wisena Relente, graduate of the Millenniors training session in Barangay 672.

The Smart Millenniors program has been conducted across the country with the help of student volunteers from Manila, Cebu and Iligan City, particularly, Adamson University, Coalition for Better Education and EduStudio in Cebu, and Mindanao State University–Iligan Institute of Technology (MSU-IIT) School of Computer Studies-Executive Council.

Program participants included residents of Barangays 734 and 672 in Paco, Manila; Barangays Dalipuga and Santiago in Iligan City; and members of the Philippine Association of Retired Persons in Cebu.

For promoting the teaching of technology among seniors and engaging the youth in this endeavor, the Smart Millenniors program won an Award of Merit at the recent 16th Philippine Quill Awards, and a Silver Anvil at the 53rd Anvil Awards last March.

For volunteers, mostly millennials, there are also lessons learned.

“Like us, seniors are also looking to learn new ways to improve their lives,” said Shun Camannong of Adamson. “We just have to listen to what they’re saying and be open to their questions.”

“This activity only proves one thing: learning is ageless,” said EduStudio director Mardy Verano, who trained the Cebu volunteers. “When one is a learner, one can be anyone he or she wants to be. It has to do with attitude. And with technology, it gets even better.”

Studies have noted that older people are prone to depression, brought on by feelings of loneliness and isolation. New research, however, has shown that internet use reduces the chances of depression among this sector of society.

According to a US professor who led one such research, “It all has to do with older persons being able to communicate, to stay in contact with their social networks, and just not feel lonely.”

For Smart “millenniors,” who are catching up with millennials, there’s no room for feeling lonely. They certainly won’t get left behind. —CONTRIBUTED