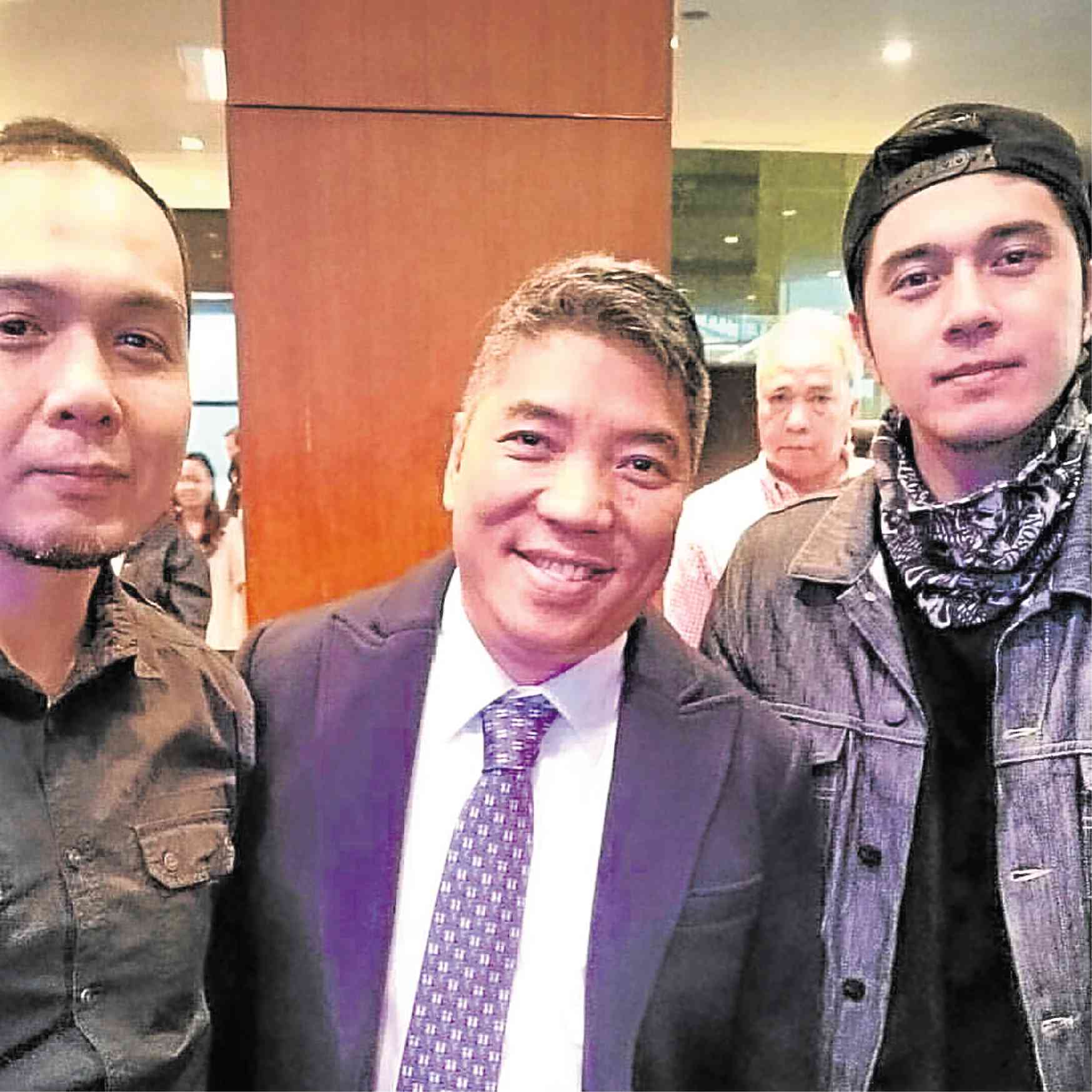 In 2015 at AyalaMuseum, the author (middle) with Jerrold Tarog (far left) C3 and Paulo Avelino after the author’s lecture on Gregorio del Pilar

The title refers to the sorry description of Del Pilar’s bloodied corpse, left on the battlefield in his underwear, his uniform, boots, and valuable personal effects pilfered by the enemy and kept as war booty.

Depending on the source you read, Del Pilar’s remains were buried a day or two later, by either his comrades or an enemy officer who honored the fallen general with a tombstone that read, “An officer and a gentleman.”

His remains were discovered in 1930, through the Igorots in his service, exhumed, and identified based on his dental records: gold fillings made during his exile in Hong Kong, and an extra tooth that was a distinguishing physical feature described in Tagalog as “sungki.”

Goyo’s remains have since disappeared, but his life lives on in the memory and imagination of Filipinos.

History is made lively by having more than one version of the story, and Del Pilar’s tragic death—rendered heroic by cinema, monuments, paintings, and textbook history over the past century—is not as clear-cut as our teachers want us to believe.

A new film on Del Pilar, “Goyo: Batang Heneral,” opened last Wednesday, with only two bad seats available for the last screening at Greenbelt 3, prompting me to move to antiquated Greenbelt 1 where some seats of my choice were open in a full house.

I am disappointed that “Goyo” director Jerrold Tarog chose the cowardly path of his flawed characters by opening with a disclaimer. We came to see a film, not a doctoral dissertation.

I envy the filmmaker’s artistic license otherwise not afforded the academic historian. Tarog’s disclaimer was a letdown for a beautifully shot film, enhanced by impeccable production design, and a cast of thousands, judging by the names that filled the screen at the end credits.

I spotted my name twice before blinking. I didn’t know what I was being thanked for, aside from providing the real identity of Goyo’s last sweetheart, Remedios Jose, not the sister Dolores, whose name was embroidered on the scented hanky found on his corpse.

Goyo, a minor character in Tarog’s surprise blockbuster, “Heneral Luna,” (2015), returns three years later as the main character in what is best described as an antihero film.

Following the lead of Nick Joaquin’s iconoclastic “A Question of Heroes,” Goyo’s dark side is shown from the beginning, when he presides over the torture and execution of one of Luna’s loyal lieutenants.

Joaquin lifted that stray bit of information from T.M. Kalaw’s “Gregorio H. del Pilar: El heroe de Tirad” (1930) that can be read cover to cover in English for the third of the time it takes to watch “Goyo.”

Kalaw’s lead should have been revisited and followed, because I remember one of my history professors advising us to take note of the sweet, knowing glances exchanged between Goyo and Emilio Aguinaldo in Carlo J. Caparas’ 1996 film on the same subject.

I wrote the introduction to the movie tie-in published by Anvil, basically a transcribed interview with Isagani Giron, who cites and summarizes all known secondary sources in an engaging read that only underscores the need for further primary source research in the “Philippine Insurgent Records” now preserved at the National Library of the Philippines.

Renewed research would have added to what we know about Goyo: He was vain, he had no military training, he was granted a general’s star because he was Aguinaldo’s favorite, and because he was loyal to one man, not to the newly born nation or the principles fought for with the blood of other heroes.

On cam, Goyo loses his focus on fighting the enemy, distracted by his attraction to the hard-to-get Remedios Jose.

It is clear that Tarog wanted viewers to see Goyo as a conflicted character, a hero in public who harbors a villain within.

Tarog foists Goyo on us as a mirror that reflects the dark side of the Filipino. Unfortunately, this is clear in Joaquin’s text but not in Avelino’s beautiful face, which did not compensate for the full range of emotions required, when all he could muster ran the gamut from A to B.

Having taken three years to make the film, Tarog should have commissioned the young historians who promote his films and got them to plow through the “Philippine Insurgent Records,” now renamed the “Philippine Revolutionary Papers,” to dig up everything they could find about Goyo.

In the mid-1980s I saw the bundle of faded papers that were drafts in pencil, in Goyo’s own hand, of letters to a certain “Poleng.” On the cover of this file was the dismissive handwritten note by Captain John R. M. Taylor, compiler of the Insurgent Records, that declared: “Withdrawn from PA 84. Drafts of love letters of Gen. Gregorio del Pilar—no interest here.”

Had they looked, they would have found more material on Gregorio and Julian del Pilar than we have today.

These young historians should have been sent to the Ateneo de Manila University Rizal Library to read the unpublished correspondence between Goyo and Trinidad H. Pardo de Tavera, which probably pertained to the failed peace negotiations between the Filipino and American forces in 1899. But this is all water under the bridge now.

Tarog should be congratulated for cobbling good films that leave us with many things to reflect on. But his greatest challenge lies in the last of the trilogy.

The antihero he tackles next is Manuel Luis Quezon, an infinitely more complex character than Antonio Luna and Gregorio del Pilar. Quezon is a man who, for good or bad, has  shaped the Philippines we live in today.