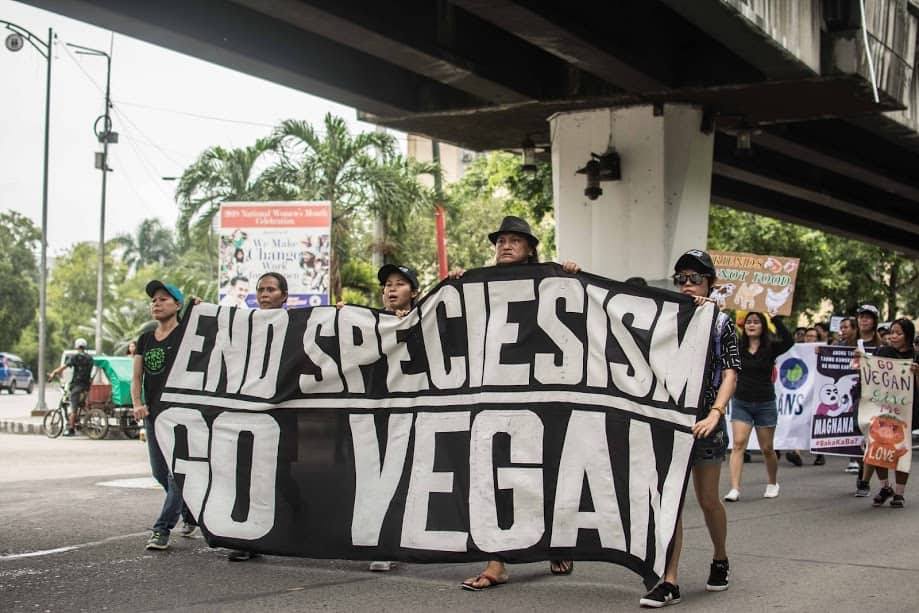 One animal rights protest in Manila took a stand not just for cats and dogs, but also for the animals that put food on our table, among others.

Last Aug. 25, about 300 individuals participated in the first Official Animal Rights March, a movement that began in London and has since been staged in over two dozen cities around the world.

The march aimed to unite vegans in fighting for animal liberation — the movement which asserts that animals deserve rights and freedom.

Being vegan is best known as a diet free of meat and animal products, including eggs and dairy. For others, it is a way of life which shuns animal cruelty and exploitation.

This means adopting a plant-based diet and using clothing and other products that do not use animals.

Beginning at the Bonifacio Shrine at 1:30 p.m., the group walked along Taft Avenue and ended in Quirino Grandstand.

One of the stops was at Manila Ocean Park where the group stood outside to protest against the use of animals for entertainment.

“End speciesism. Go vegan,” large white letters read over a long black banner that fronted the march. “Speciesism” is a term popularized by “Animal Liberation” author Peter Singer, which he defined as prejudice for one’s own species over others.

The protest in Manila was organized by three friends: Jofer Santos, Cacai Buenviaje and Gilbert Santos. The three are not connected to any animal rights organizations; simply put, they are just animal lovers.

Santos told INQUIRER.net in an exclusive interview that they reached out to Surge, the organization behind the annual London march, last August 2017 to plan their own protest in Manila, and were given approval.

“The march was mainly held for all animals, not just dogs and cats,” said Santos.

He explained that they were fighting against various industries that use animals whether for food, entertainment or experimentation. “The main point of the march was to put an end to all animal oppression.”

“What motivated myself and fellow activists was mainly the animals and what they go through every single day. We realized we should do an event like this so people will realize and understand that animals have feelings just like us humans,” he said.

From veganism to activism

Santos, vocalist of metal band Ascend from Ruins, has been vegan since 2008.

He was converted after watching videos on going vegan: “The funny part was I was eating meat at the time. I was eating chicken adobo and that was the last time I ate meat ever again.”

Initially, he would talk about becoming vegan with friends and family, until he decided to take the next step to fight for animal rights: becoming an activist.

“I realized being vegan wasn’t enough. The reason you become vegan is because you no longer support all forms of animal oppression,” he explained. “If I truly want a more peaceful world, if I truly want the vegan goal to be achievable, I have to do more.”

That was back in 2014, and on his own, he took to the streets to hand out flyers about veganism.

“I was all by myself. Back then, I was the only vegan I knew. I had vegan friends on Facebook but I only met them in 2015,” he said. Those friends he found in the Facebook group Manila Vegans whose members now number at 27,000-strong.

Though being vegan in the country is slowly becoming easier — he notes that in Makati, more restaurants offer plant-based options — there is still a scarcity of animal activists.

In his speech during the march, he urged fellow vegans to take action, highlighting that adopting the vegan lifestyle isn’t enough to end animal suffering.

“It is important for us to get active so the industries that torture animals would feel our presence and the pressure we bring,” he appealed during the protest.

Promoting veganism in a meat-loving country

When asked how veganism can be promoted in a country whose diet is rich in meat, he said different approaches should be adopted.

Another point he emphasizes is that animals have feelings too. “They feel joy, they feel pain, they feel agony, they feel torment… humans are also animals so we are basically just like them. I think it’s really not hard to understand,” he explained.

Can non-vegans join their animal rights activities? Yes, he says. He does encourage people to participate in any way they can to help animals such as doing rescue operations but still encourages them to go vegan.

“While you save animals like dogs and cats, they consume pigs, cows, fish or any animals. It still doesn’t make sense,” he said.

For those interested in becoming vegan, he recommended joining Facebook group Manila Vegans, which offers a one-month challenge and an online coach to guide you through the process.

Santos also volunteers for Metro Manila Animal Save, a group which stops trucks that transport pigs and feed the animals with food and water before they are slaughtered.

“You don’t have to be super good at speaking to people about veganism and animal rights for you to be considered an activist,” Santos said in his address during the march. “Always remember that if we choose to remain silent, their (the animals’) grief, pain, torment and suffering will never come to an end.” JB