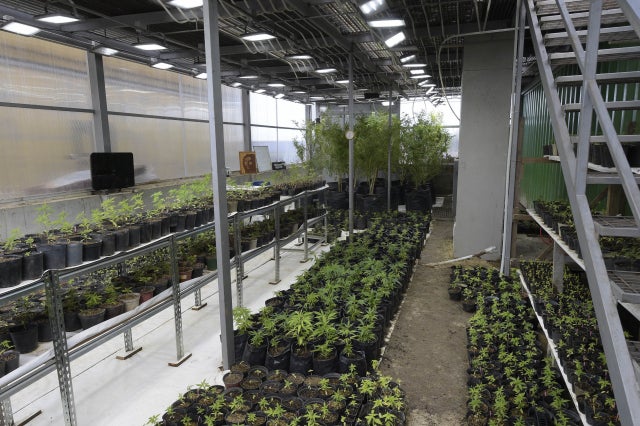 Uruguay’s mate gets a makeover, with cannabis

Laid-back Uruguay has long been synonymous with herb-infused mate tea, and more recently became the world’s first country to legalize cannabis — so now manufacturers are bowing to the inevitable and putting the two together.

Cannabis-infused mate is hitting supermarkets across the South American country this month as marketers give a new twist to the bitter tasting national beverage.

The move is part of efforts to develop a spin-off industry in the small South American country, where cannabis has been legally on sale since July last year.

As medicinal and recreational cannabis gains traction across the world, Uruguay’s legalization of weed is attracting the attention of major food groups.

But competition is about to get a lot hotter.

G7 country Canada is set to follow Uruguay’s pioneering example and become only the second country to legalize pot next month.

Beer-giant Constellation Brands, which owns Mexican brand Corona, last month said it was injecting $4 billion into Canadian marijuana grower Canopy Growth in a bid to corner the world market in cannabis-infused drinks and other products.

But a small Uruguayan company, BCBD Medicinal, has got its nose in front of its competitors in a market that seems set to explode.

Its cannabis-infused mate has already hit the shelves in some parts of Uruguay, with sales going ahead in other areas this month.

The government allows only two private companies to produce commercial cannabis, though several others are working on derivatives, particularly for medical purposes.

In BCBD’s greenhouses an hour east of the capital Montevideo, seedlings grow in protected conditions to avoid the austral winter cold.

A portrait of a dreadlocked Bob Marley set among the rows of delicate plants may give the wrong impression: the Jamaican reggae icon helped popularize marijuana, though what BCBD produces is not the high-inducing “recreational” cannabis extract, but the non-psychoactive compound Cannabidiol or CBD.

Boring and medicinal as it may sound, CBD does provide a certain “serenity” for regular mate drinkers, according to Puentes.

Cannabis-infused mate “doesn’t have the secondary effects produced by the traditional herb that can cause discomfort or gastric problems, but in fact CBD eliminates all these symptoms.”

The company has orders from Israel, Spain and Germany, while mate itself is experiencing a moment through its use by stars such as Luis Suarez of Uruguay, Argentina’s Lionel Messi or even French World Cup winner Antoine Griezmann.

Many swear by its ability to deliver a gentle pick-me-up without the side effects of coffee, and as a general tonic for pain, fatigue and depression.

“It’s about integrating cannabis into the local culture,” BCBD cultivator Alfonso Vilardo as he moved through the rows of plants.

Marijuana culture is gaining a foothold in Uruguay, but out-and-out pot smoking may still be a tough sell from a marketing standpoint. A union of cannabis and mate has long seemed inevitable, free of social stigma in a country where just about everyone drinks mate.

A common sight in Uruguay and neighboring Argentina are men and women walking down the street with their gourds, sipping through a metal straw called a bombilla, a refill thermos flask of water tucked under their arm. An average drinker thinks nothing of consuming two liters a day.

Uruguay has the highest per-capita consumption of mate among the South American countries where it’s most popular, Argentina, Paraguay, Chile and Brazil.

The country of 3.5 million also allows cannabis to be grown, distributed and purchased in pharmacies by Uruguayan citizens.

Uruguay grants limited home cultivation for personal consumption and limited-membership clubs can grow their own marijuana.

Almost 27,000 people have registered with pharmacies since the drug went on legal sale in July last year. Nearly 7,000 home cultivators and more than 100 co-operative clubs have been registered since the law was first promulgated in 2013 by Uruguay’s then-president, the leftist Jose Mujica.

The so-called marijuana mate contains only about two percent cannabis.

Still, Puentes insists, it can be relied on for that elusive “feeling of wellbeing”. NVG