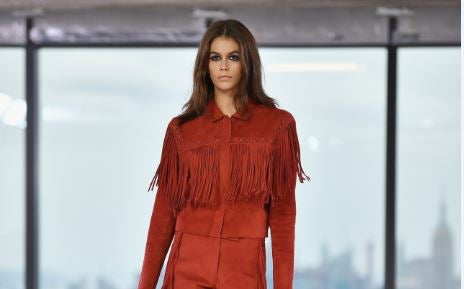 Longchamp decamped across the Atlantic on Saturday to make their New York Fashion Week debut and celebrate their 70th anniversary by looking to the future, fronted by new brand ambassador Kendall Jenner.

Guests were invited to the World Trade Center, where the Manhattan skyline provided a dazzling backdrop to a collection summed up as 1970s glamor, California spirit and Parisian elegance.

The French staple, best known by millions around the world for the iconic Pliage bag, is building on its leather goods heritage by highlighting its ready-to-wear, sunglasses and footwear lines.

Their first fashion-week runway show comes hot on the heels of opening a new boutique on New York’s legendary Fifth Avenue in May, and the selection of supermodel Jenner as their new ambassador.

They are poised to open a new boutique in Beverly Hills — hence the California spirit, which Jenner herself evokes, as does model-of-the-moment Kaia Gerber, 17, who walked the runway.

Jenner sat front row, sporting the Longchamp Gladiators on her slender pins, next to Kate Moss, who was the face of Longchamp for eight years and in turn sat next to Indian actress Priyanka Chopra.

“It’s a way of expressing the international development of the brand,” Longchamp CEO Jean Cassegrain, 53, told AFP by telephone of the family firm’s decision to show in New York, on the third day of fashion week.

Cassegrain is the grandson of the founder. Sister Sophie Delafontaine is creative director, brother Olivier heads up operations in the United States and their 81-year-old father is still company president.

There were lots of fringed tops, shorts and mini-skirts in suede, gladiator sandals, and Ikat-style prints on long skirts and dresses.

“Twenty-five years ago, fashion and leather goods were separate sectors,” Cassegrain said. “The bag is now a fashion item, and labels also have to be fashion labels.”

Otherwise Saturday saw a return to politics at New York Fashion Week after having taken something of a backseat after the early days of liberal outrage over the Donald Trump presidency.

Nixon, whose effort to oust two-term incumbent Andrew Cuomo will do or die in Thursday’s Democratic primary, sat in the front row.

Each guest was given a Vote for Cynthia leaflet, there were special thanks to her in the notes for “all you are doing for New York” and Siriano came out for a bow at the end in a Nixon T-shirt.

Schlepping out to deepest Brooklyn and sitting on soggy benches in a downpour might not have been the fashion pack’s idea of fun.

But those who made the journey were wowed by the burgeoning talent of up and coming label Pyer Moss, their all-black models, band and gospel choir in an historic black setting for his latest show.

“I wanted to show what African American leisure looks like,” designer Kerby Jean-Raymond told reporters backstage. “We just wanted to make that modernized, simple and young.”

In addition to his collaboration with Reebok, the silhouette for the Pyer Moss woman was sophisticated, flowing gowns, waterfall hemlines and kaftan-inspired evening wear in white, pale pink and yellow.

Stunning prints made out of portraits by painter Derrick Adams were blown up onto organza, jacquard and pleats, and a cocktail dress studded with 200,000 Swarovski crystals

“It’s people that look like my friends and people who are constantly overlooked in normal bookings,” Jean-Raymond told reporters when asked about his all-black casting.

“I want to show that black can be beautiful and not just always sensationalized, not always tragic, not always just like for your entertainment. It can exist on the sole purpose of us being us.”

The show was held at the Weeksville Heritage Center, which preserves one of the first 19th century free African American communities.

The choir, dressed in white robes, belted out a stirring soundtrack to rapturous applause, deliberately chosen and opening with “Be Real Black For Me”. CC