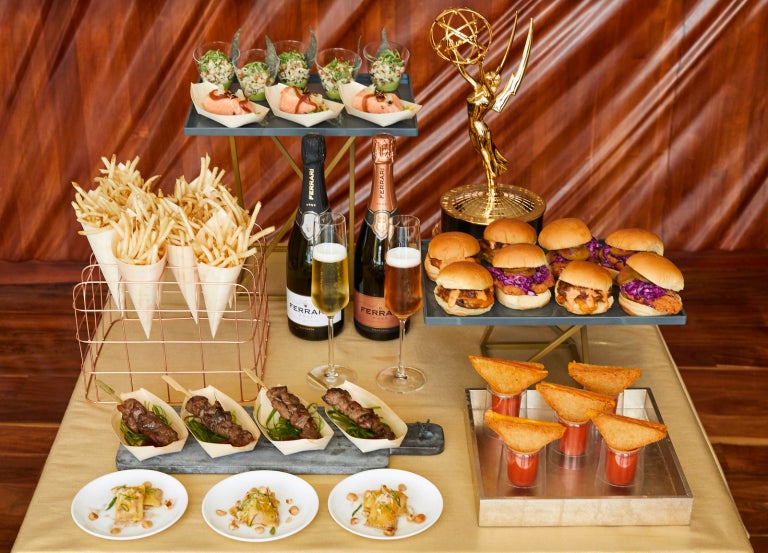 The menu at the 2018 Governors Ball. Image: Matt Sayles/Invision for the Television Academy/AP Images via AFP Relaxnews

When you’re feeding the biggest stars of American television, plain old spuds are topped with truffles, tomato soup made with the heirloom variety, and desserts made vegan with coconut milk and chia seeds.

For the 70th annual Emmy Awards, which takes place Monday, Sept. 17, organizers are shaking things up, doing away with the traditional sit-down dinner and moving the after-party celebrations to the rooftop of the LA Live Event Deck.

Themed “Emmys Under the Stars”, the open-air parties, which include the Governors Ball and the Creative Arts Governors Ball, are being reorganized to allow guests to mix and mingle; give congratulatory air kisses to the winners of the night; and hobnob with fellow actors and network producers.

For the many vegan, vegetarian and gluten-free stars and starlets, the menu will also feature cashew ceviche, truffle-scented fries, and salad made with locally-sourced corn, beets, heirloom tomatoes and peaches.

And for dessert, vegans will be served coconut chia seed tapioca.

The 70th annual Emmy Awards airs Monday, Sept. 17 at 8 to 11 p.m. ET on NBC from the Microsoft Theater in Los Angeles. JB