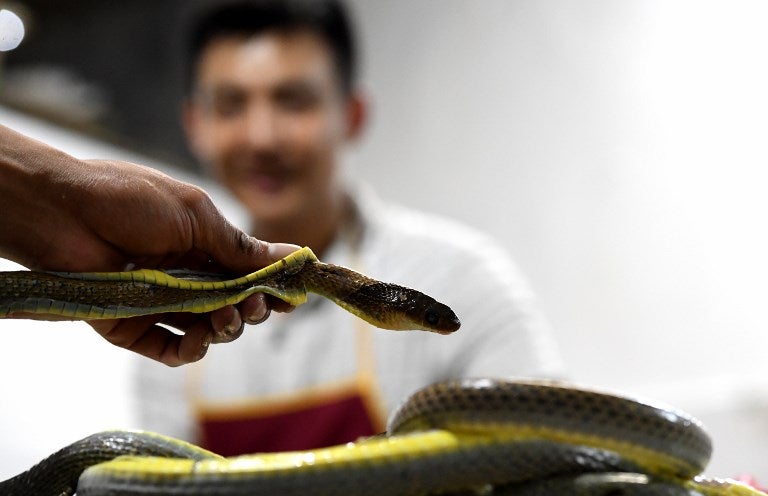 This photo taken on August 24, 2018 shows chef Dinh Tien Dung preparing to cook a snake at a specialty restaurant in Yen Bai province while an assistant looks on. With their meat served up in a wide array of dishes and blood imbibed in rice wine, snakes make a satisfying -- and nourishing -- meal in Vietnam. / AFP PHOTO / Nhac NGUYEN

Snakes on a plate: Vietnam’s coiled dish, served with lemongrass and chili

With their meat served up in a wide array of dishes and blood added to rice wine, snakes make a reputedly satisfying — and nourishing — meal in Vietnam.

Caught in the jungles of the north of the country, snake flesh is traditionally believed to help with cooling overheated body temperatures, relieving headaches and easing digestion.

Restaurants will cook it steamed or fried with lemongrass and chilli and serve it with a rice wine mixed with snake blood, said chef Dinh Tien Dung, who works at a restaurant in Yen Bai province three hours northwest of the capital Hanoi.

Holding a snake’s head with one hand, Dinh Tien Dung slit its body near the head with a knife and squeezed blood out of it, dripping it into a cup of rice wine.

“We make use of every part of the snake except its head and its scales,” said the 32-year-old.

Locals believe that only men over 50 should drink snake wine, as younger males are likely to experience “backache or impotence,” said restaurant owner Duong Duc Doc.

As for its flesh, the benefits to eating it are numerous, said snake-catcher Dang Quoc Khanh, a 35-year-old who has been trapping serpents in the jungle since he was a young boy.

“The whole process of these animals ending on a plate or in a drink is very painful… and it’s done for purposes that are not justified,” Dungler told AFP.   /vvp