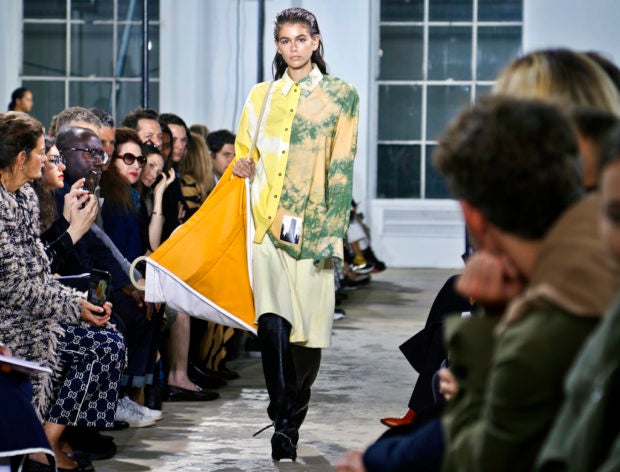 NEW YORK — After two seasons in Paris, Proenza Schouler designers Lazaro Hernandez and Jack McCollough are back at New York Fashion Week— and emphatically so.

With their new collection unveiled Monday, they’ve gone all-American in spirit: denim, denim and more denim, with almost no embellishment — no embroidery, feathers or sequins. And though the fabric came from Japan, the collection was entirely made in the United States.

“In Paris you kind of get into all the embroideries and the feather work, and you’re relying on all that technique,” Hernandez said. “And going back to New York (we thought), ‘Why don’t we do the whole collection in one fabric, and what if that fabric was denim? What could we do with that? So we really limited the scope of material in a major way.”

In the place of embellishment techniques, there was tie-dying and acid washing. As for accessories, there were Western-style, bandanna-like scarves across the neck, and tote bags so large it seemed one could fit another human inside them.

This season, the duo also collaborated with Berlin-based sculptor Isa Genzken — “one of our idols,” Hernandez said — for inspiration. When guests entered their show in downtown Manhattan, they were confronted with a large installation by the German artist of mannequins dressed in bits of Proenza garments.

“We sent her some pieces, she ended up making an installation with the clothes, and we started riffing off the installation and putting it into the collection,” McCollough said. “So it was two separate bodies of work riffing off of each other, in a way.”

While the duo was happy to be back in New York, they weren’t ruling out showing again in Paris one day — or somewhere else.

“I think the beauty of the world we live in today is that things are just more fluid,” McCollough said. “Especially a company like ours. We’re an independent company. We don’t have to be told what calendar to follow, we can bounce around, try things out. We learned a lot in Paris both good and bad, and you kind of build off that and evolve it, you leave the stuff that didn’t work behind and keep the new stuff.”

“I think what’s cool is bouncing around, trying different things out and seeing where it lands.”

An advantage of the new pared-down style is that some items are now more affordable than some of Proenza Schouler’s more elaborately embellished garments.

McCollough noted that one of the biggest sellers of a recent Paris collection was a long-sleeved, tie-dyed dress priced lower than some bigger-ticket items — which also turned out to be the most attention-getting and most photographed look.

An Affordable Proenza Schouler Collection Is Coming Your Way