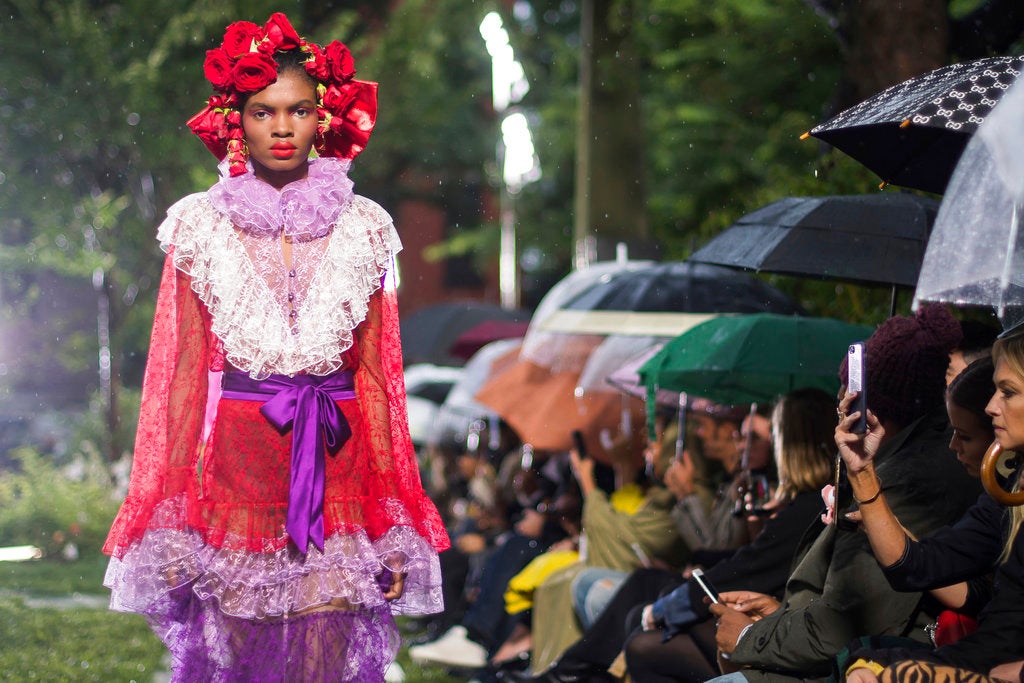 A model walks in the Rodarte show, which was held outside in the rain, during Fashion Week on Sunday, Sept. 9, 2018 in New York. (Photo by Charles Sykes/Invision/AP)

NEW YORK — There was a steady rain coming down as guests were handed transparent umbrellas and seated in a flower-strewn cemetery in Manhattan’s East Village for the return of Rodarte, designed by sisters Kate and Laura Mulleavy, to New York Fashion Week.

There were grumbles as guests sat down on waterlogged wooden chairs, hastily wiped off with paper towels by harried assistants. But though it may have seemed the weather was going to ruin Sunday evening’s show, the opposite proved true. Somehow the raindrops and the misty air at the 19th-century Marble Cemetery enhanced both the visuals and the mood, providing a perfect backdrop for the filmy, floral creations that the Mulleavys specialize in.

Guests were particularly taken with the rose-bedecked tulle veils and flowered headdresses that made the models look like gorgeous ghosts from a past century, perhaps a reference to the burial vaults below. The models even managed to avoid tripping on the rain-soaked pathway, or getting stuck in wet earth, as they stood, calmly, in the grass once they’d finished their walks.

At points it was hard to tell, even from very close, whether you were seeing raindrops or actual crystals sewn onto the dresses — a rather seductive problem.

Kate Mulleavy said later that she’d been deeply moved during the show, in part because of the challenging logistics. “I don’t usually get emotional but backstage I was emotional today, for sure,” she said.

Whoopi Goldberg, Rachel Brosnahan and Brie Larson were among the celebrity fans at the show, which came after a two-year Rodarte absence from New York Fashion Week, during which the sisters showed in Paris and also released their debut feature film, “Woodshock.”

Kate Mulleavy said the designers were happy to be back, adding that they felt fashion had “a romantic love affair with New York.” She said they’d temporarily moved their show to Paris, as have a number of other American designers, partly because of the more advantageous marketing schedule. “That is a big part of our reality,” she said of business concerns, “but it shouldn’t be the ruling part. There is also the creativity.”

Mulleavy said the inspiration for Sunday’s show was no more specific than “a wild rose garden.”

“It was more organic this time,” she said of the development of the new collection. “We started thinking about rose gardens, but also the 1950s, and Calder and Picasso,” she said. “But we didn’t have an outline of a whole story.”

Laura Mulleavy added that the duo had also been listening to singer Kate Bush for inspiration.

“The starting place was just wanting something colorful,” she said. “Then you find a fabric you like and it spirals in your head. You know when it feels right.” MKH