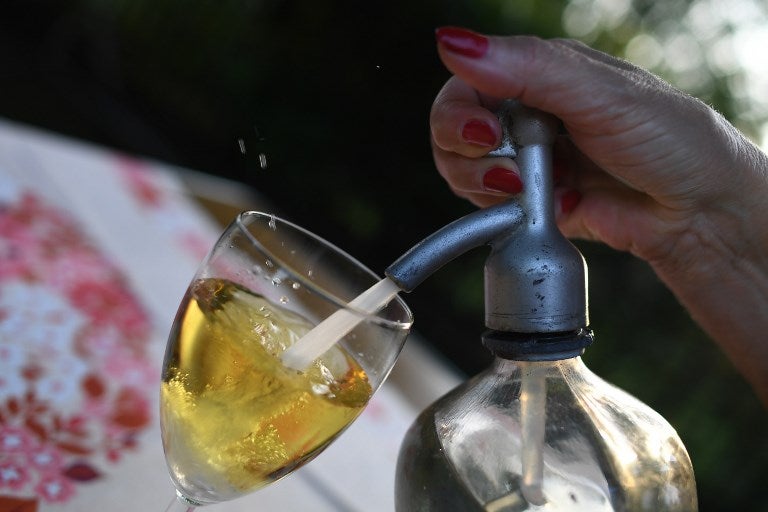 A woman serves a glass of "froccs" spritzer, a centuries-old Hungarian drink made out of wine and soda on September 7, 2018 in Budapest. The small family business is enjoying a revival in demand for soda water as the centuries-old "froccs" spritzer (pronounced "froetch") -- made of chilled white or rose wine splashed with a dash of carbonated water -- has become a drink of choice in trendy bars and restaurants in Budapest. / AFP PHOTO / ATTILA KISBENEDEK / TO GO WITH AFP STORY BY PETER MURPHY

“Drinking ‘froccs’ and soda water is part of Hungarians’ DNA; they smile when they see a siphon bottle,” says Laszlo Kiss, who works side-by-side with his father, also named Laszlo, in the workshop.

The small family business is enjoying a revival in demand for soda water as the centuries-old ‘froccs’ spritzer (pronounced “froetch”) – made of chilled white or rose wine with a dash of carbonated water – has become a top tipple in trendy bars and restaurants in Budapest.

“Froccs wasn’t that popular when we started seven years ago, but now most menus in Hungary offer it,” said Peter Ondrusek, 44, whose outdoor bar, named after the fizzy drink, teems with young Hungarians as well as tourists.

“Foreigners also like froccs once they get to know it, although we have to teach them how it’s pronounced,” he says.

Kiss bought the workshop on the ground floor of a quiet Budapest courtyard in 1994 but says soda has been made on the premises “for generations”.

“Soda tastes better than mass-produced mineral water that goes flat soon after you open the cap,” said the 69-year-old, during a break from blasting pressurized carbon dioxide into hundreds of bottles each day via a pedal-run machine.

The glass siphon bottle that dispenses soda water is a closed system with a trigger pull and a tube so “the last drop is as fizzy as the first,” Laszlo junior, 38, explained, his goggles and overalls splattered with water that escapes from the machine between fillings.

His invention spawned thousands of factories that made up Hungary’s third-largest industry during the 19th century.

Demand soared as famous writers and artists eulogized the mixing of water and wine.

The 20th-century novelist Sandor Marai wrote that froccs, “thick enough to encourage your imagination and tame enough not to damage your organs”, contained “the secret of long life”.

Until World War II, most Hungarian kitchen and restaurant tables sported siphon bottles, with soda water drunk both straight and mixed with wine.

But most of the larger factories were razed by wartime bombing and many plant owners of Jewish background killed during the Holocaust.

Nationalization during the post-war communist era dealt another blow to a drinking tradition scorned as decadent, while globalization has further hit the business since Hungary ditched communism in 1990.

But froccs culture is gradually bubbling back, especially in the summer.

“A soda straight from the fridge with a slice of lemon or in a froccs goes down well on hot days,” said customer Kristof Pap, 27, carrying his refillable bottle into the Kiss factory.

The workshop’s clients, whose numbers have risen almost 10-fold since the business started, range from hip, new wine-bar terraces to basic cellar bars in poorer districts, as well as customers who pop in from the street.

The menu of Ondrusek’s froccs bar now has some 20 combinations, including traditional staples like the little (“kis”) and large (“nagy”) froccs, one or two deciliters of wine with one of soda water.

Another classic, the “Krudy” – one deciliter of water, nine of wine – recalls a hard-drinking writer, who said that soda “makes wine laugh” when mixed in that ratio.

Nearby, on the fringe of Budapest’s swanky bar and nightclub district, the Gerloczy pub – serving up wine ladled from deep tureens and shot with soda since 1972 – is a rare survivor of the functional neighborhood bars that served cheap froccs to workers under communism.

“It’s main job is to refresh, and it doesn’t get you too drunk so you can still work afterwards,” says office cleaner Istvan Szirtes, 52, after quaffing one of the modern froccs concoctions, a “Sport” – one deciliter of wine, four of water. /kga