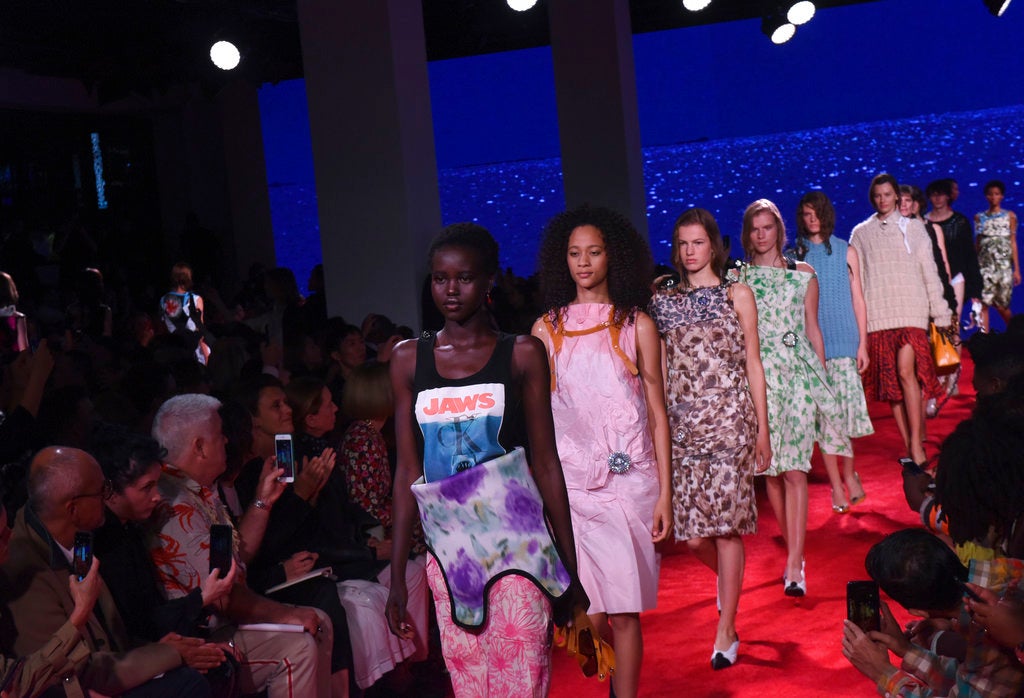 Calvin Klein’s Raf Simons takes a bite out of fashion, riffing on ‘Jaws’

It’s perhaps apt, then, that his latest collection should be a riff on the movie “Jaws.”

The Belgian designer makes no secret of his obsession with cinema, often referencing obscure European films as inspiration for his work. But after Tuesday’s “Jaws”-themed runway show, it was clear that Simons loves himself a good Hollywood blockbuster too.

“It’s a masterpiece on all levels,” Simons declared afterward of Steven Spielberg’s 1975 film. “And I think it speaks about so much more than a shark that kills a person.”

In his three previous Calvin Klein shows, Simons has riffed in various ways on the American landscape. In February, he even built a landscape out of popcorn (some attendees are probably still finding kernels in their shoes). For this, his fourth, Simons turned not to land, but to sea.

As the lights dimmed, two enormous screens, taking up two full walls, lit up with a view of the glistening blue ocean, where a lone swimmer skimmed along the surface. Peaceful enough — until those unmistakable, pulsating, terrifying notes from the “Jaws” theme started playing on the soundtrack.

Simons’ models emerged, with wet hair and glistening skin, almost all wearing versions of wetsuits, fashionably unfastened and folded over at the waist. The wetsuits — some black, some patterned — served as a unifying theme for an eclectic set of ensembles. Some models wore “Jaws” tanks or tees; others wore more dressy items like black pants or printed summer dresses.

And many wore tasseled graduation caps, and robes — because Simons was also riffing on “The Graduate.”

Somewhere along the way, things turned sinister. Women in comfy sweaters and pretty patterned skirts headed down the runway, only to reveal that large bites had been taken out of the skirts.

So who, or what, was the shark? Simons said the shark simply represented danger.

“Very often we are attracted to things that we actually know are dangerous,” he said. “But we can’t stay away from it, I think.”

Simons said his message wasn’t political, at least not directly, but that he wanted to point out that “disasters happen but then they turn again into beauty, and beauty is around us and it can often turn into disaster.”

Simons said he had always wanted to do something with “Jaws.”

“I’m fascinated with how somebody’s creation can be a masterpiece no matter if it’s underground or commercial, whether it’s for a big audience or a small audience,” he said. NVG

At Oscar de la Renta, a Mediterranean vacation on a rooftop