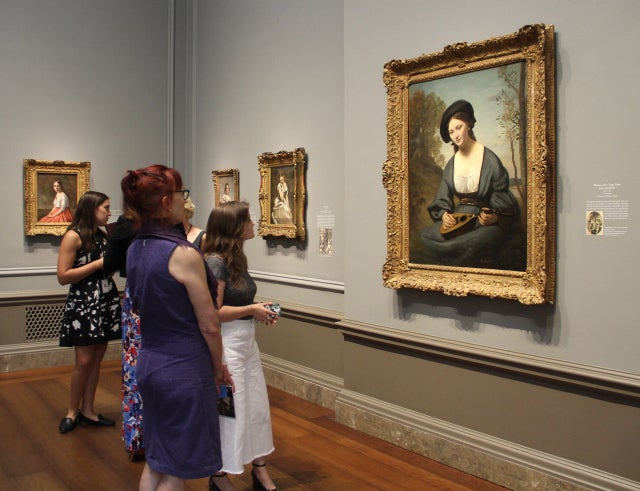 When Camille Corot’s figure paintings last went on display more than a century ago, they stunned Pablo Picasso and Georges Braque, who paid tribute to the French painter in their groundbreaking Cubist creations.

Through December 31, the National Gallery of Art in Washington is presenting dozens of portraits of women that are some of the most intimate, rarely seen and modern works of an artist celebrated for his dreamy landscapes.

They reveal the 19th century painter as a missing link between the staid formalism of classical and romantic painting with the impressionism and modernism that followed.

The tension of works caught between these radically different approaches is palpable.

Here, Corot pushed the boundaries of what was acceptable as a finished painting in ways he never dared with his uber-popular landscapes, of which he created nearly 3,000 — not counting the many forgeries.

“It is a rarefied arena in which he can be more experimental and try out new things,” said exhibition curator Mary Morton, the head of the museum’s department of French paintings.

The show includes works loaned from some of the most prestigious public and private collections in Europe and the United States.

The pictures are sometimes hazy but the languid faces emerge into sharper focus out of a dark backdrop with near-abstract elements painted with quick, loose brushstrokes.

The sometimes unsettling aesthetics paved the way toward painting for the sake of painting, where a picture that deliberately reveals the artist’s hand is presented as finished without being completely resolved.

Unlike a separate show at the Musee Marmottan Monet in Paris earlier this year, this one focuses exclusively on Corot’s female subjects, apart from a lone picture representing Saint Sebastian.

A portrait that bears the mysterious title of “Woman with a Pearl” (circa 1868-1870) references both with its title Vermeer’s famous portrait (“Girl with a Pearl Earring”) and with her unsettling gaze none less than Leonardo da Vinci’s Mona Lisa.

Corot created a myth all of his own in an intriguing composition (“Bacchante with a Panther,” 1860) featuring a child mounted on a panther while a reclining nude dangles a dead bird before the feline’s mouth, the whole thing made even more enigmatic by dark lighting.

Coming full circle, Corot toward the end of his life in the late 1860s and early 1870s depicted his models in studio settings with a hand touching one of his landscapes and the other holding a mandolin, hinting at his love of music. AB