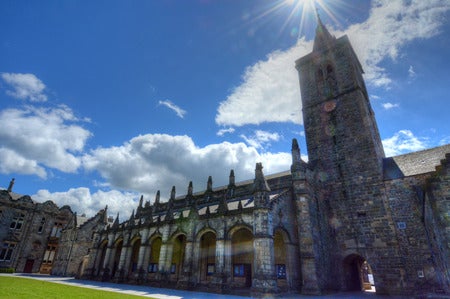 Here’s one college student who probably won’t be scrimping on a budget.

An Indian billionaire has reportedly requested for a staff of 12 to assist his daughter in a mansion near her new school, University of St. Andrews in Scotland, reported The Sun Monday, Sept. 10.

The university is known as the place where Prince William and Kate Middleton met.

The staff was announced for hire through Silver Swan Recruitment, an agency that sources domestic workers for private estates, yachts and villas. The listing stated that the mansion needed a butler, gardener, house manager, lady’s maid, chauffeur, chef, three housekeepers and three footmen.

The lady’s maid’s duties include waking the student up and helping her with grooming, wardrobe and personal shopping. Scrounging for late-night takeout won’t be necessary as footmen will serve her dishes. They will also open doors for her “whenever possible.”

The family will also come to visit every now and then and is described as “very formal” in the ad, hence the need for “experienced staff.”

Staff will be compensated with £30,000 (around P2.1 million) a year. A Silver Swan Recruitment spokesperson said that nearly all positions have been filled, reported the Times of India yesterday, Sept. 12.

A University of St. Andrews spokesperson said in the Times of India report that the school had no confirmation of the student’s living situation and commented: “It is the student’s private life. They can live how they want.”  Niña V. Guno /ra