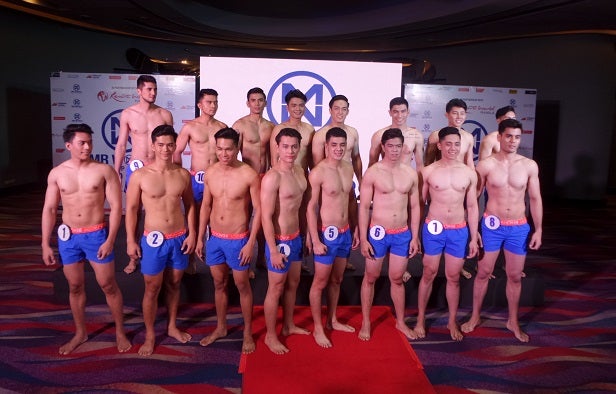 The 16 candidates to this year's Mister World Philippines contest, presented here at the Vestibule Bar of Resorts World Manila in Pasay City, will be waiting a little longer before they know their fates. (Photo by ARMIN P. ADINA / Philippine Daily Inquirer)

The Miss World Philippines Organization (MWPO) announced on Friday the postponement of its male pageant, Mister World Philippines, as Typhoon “Ompong” approached the Philippines, raising fears of a catastrophe of “Ondoy” and “Yolanda” proportions in different parts of the country,

In its advisory, the MWPO said it has “decided to reschedule the Mister World Philippines 2018 pageant to a later date.”

No new date was announced, but the organization advised the public to “stay tuned to our social media pages.”

The 2018 Miss World Philippines finals, meanwhile, is set on Oct. 7.

It has been almost ten years since the last Mister World Philippines search was staged by the former franchise holder, Binibining Pilipinas Charities Inc. (BPCI).

The group also lost its right to choose the Philippines’ representative to the biennial global search for men when the international Miss World Organization awarded the local franchise for Miss World to Cory Quirino in 2011.

Its first entry, Andrew Wolfe, finished second in the 2012 contest. It also sent Filipino-foreigners John Spainhour in 2014, and Sam Ajdani in 2016.

After changing hands last year, with talent manager and events organizer Arnold L. Vegafria at the helm, the MWPO decided to stage a counterpart male competition to select the country’s representative to the 2018 Mister World contest, which will be staged in the Philippines in January 2019.

The group presented 16 contestants for the 2018 Mister World Philippines contest, which includes former national titleholders, and some with international experience.

At the sidelines of the candidates’ press presentation held at the Vestibule Bar of Resorts World Manila in Pasay City recently, MWPO General Manager Bessie Besana told the Inquirer that the search will look for “the most desirable man in the Philippines” in adherence to the global tilt’s tagline.

“A series of challenges will test the candidates’ abilities leading to the finals,” he added.

Meanwhile, Vegafria said one of the things that sets his male search apart from the other contests is having a national telecast.

“The other male pageants aren’t televised,” he explained.

The winners are expected to work hand-in-hand with the Miss World Philippines queens for various charity projects. /atm