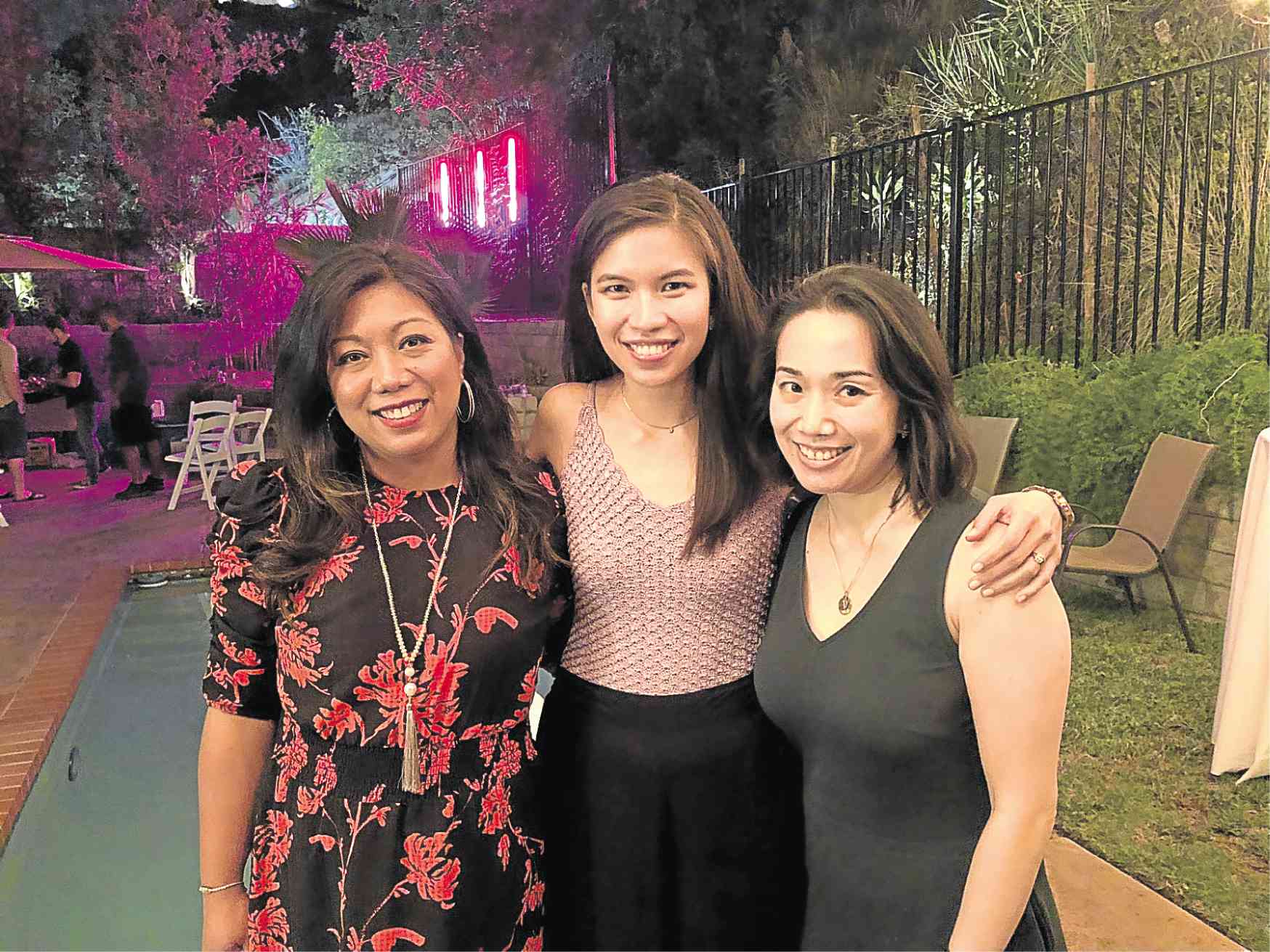 Noncrazy Asians in Hollywood: How four young Filipino women are thriving in the ‘jungle’

Since its world premiere, “Crazy Rich Asians” has been described as a watershed moment for Asian representation in Hollywood. The box-office smash based on Kevin Kwan’s bestselling novel is the first film to feature an all-Asian cast since 1993’s “The Joy Luck Club.”

But while Asians continue to be underrepresented both in front of the camera and behind the scenes, those who find their place in the industry are not only making great strides at work; they’re also living the proverbial Hollywood dream.

Self-described movie geek Corinna Vistan was a reporter at ABS-CBN when she moved to San Francisco to study film at the Academy of Art. Years later, the director of franchise creative content at Marvel Studios has won a Clio (the award for excellence in advertising) for her work in a “Guardians of the Galaxy Vol. 2” campaign, and two Silver Telly awards (which honors excellence in video and television) for “Doctor Strange” and “Thor: Ragnarok.”

Following a hunch that she should work in Hollywood, Lea Dizon packed her bags and headed to Los Angeles’ University of Southern California (USC) School of Cinematic Arts to pursue a master’s degree in film and TV production.

Formerly a writer for Summit Media, ABC 5, ABS-CBN and Star Cinema, she is now vice president for development and products for DreamEast Pictures, overseeing the company’s animation and live action slate.

Dizon, who has produced over 25 films and video projects that were screened in the United States and international film festivals, is busy producing the animated TV series “Valt the Wonder Deer.”

Assumption College graduate Joey de la Rosa pursued further studies in English, film, television and theater at the University of Notre Dame in Indiana. She then joined Mandalay Pictures, where some of the titles she was involved in were screened at the Sundance Film Festival and LA Film Festival. Jumping on the digital content bandwagon, she then worked for media and entertainment outlets DreamWorks TV, Awesomeness TV, and Fullscreen, launching their streaming video-on-demand service.

Recently promoted to director for content development of NBC Universal, she oversees the new digital lab in partnership with the company’s cable channels—E!, Bravo, SyFy and NBC sports, among others.

Fellow Assumptionista Pia Chikiamco became only the second Filipino to complete a masters in fine arts degree at USC’s prestigious Peter Stark Producing Program. This helped her break into the industry: after working at the CW network, ABC Entertainment, and management company Mosaic (where she handled shows and pilots for HBO, CBS and Comedy Central), she’s now the director of development and current programming for animation studio Six Point Hardness and its parent company Mondo Media.

The job requires her to oversee TV animation projects for streaming and cable networks Hulu and FX, as well as content for the company’s subscription video on demand service.

Before racking up impressive CVs, all four started at the very bottom, as overworked and underpaid assistants. Think Anne Hathaway’s Andy Sachs in “The Devil Wears Prada.”

Lifestyle interviewed them via e-mail.

“As an intern, I would read scripts, get coffee, take my boss’ car to the carwash and one time, cleaned a nasty stain from the carpet,” Vistan recalls. “I had to drag a huge steam cleaner vacuum machine down one of the streets of Beverly Hills and take it up to her office.”

“When I was starting out, it didn’t matter that I had a master’s degree from what was considered the best film school in the world,” Dizon says. “I was making coffee, running errands and getting yelled at, and I had to be okay with that. It didn’t have anything to do with being Asian; they were just the rules of the game.”

Chikiamco was lucky: Studying at USC opened doors to an internship. “It’s not a magic bullet, though,” she cautions. “Grad school provided me only with the access to that initial opportunity.”

“Without connections, the barrier to entry is quite high,” De la Rosa agrees. “You have to start out as an assistant, dealing with long hours, low pay and often challenging personalities.”

In time, it was the inherent Filipino qualities of resilience and diligence that helped them overcome tough times and land better job opportunities.

Vistan, who impressed her boss with her sheer commitment as an intern, was eventually promoted to assistant. Through the years, she has managed to grow in her profession despite the threat of the US economic recession and Writer’s Strike.

For Chikiamco, it was her solid work ethic that turned her internship into a real job. “And making a good impression at that first job helped me land my next gig.”

“I take pride in being Filipino and how that has shaped my approach to work,” De la Rosa says. “I credit my Pinoy sense of pakikisama for my networking skills. It has allowed me to find common ground with others and collaborate on projects with people from different backgrounds.”

Still, not all homegrown habits are helpful when navigating the industry.

Dizon’s boss once took her aside and told her that being “too nice” didn’t cut it in Hollywood. “It just goes to show how aggressive and proactive you must be to survive and get ahead in this jungle,” she says.

Chikiamco admits having to “unlearn” otherwise admirable traits like humility and gratefulness in favor of more acceptable Hollywood behavior.

“I had to learn to be more aggressive and stand up for myself to make sure my achievements and contributions were being recognized,” she says.

For all the hard work, sacrifices and compromises needed to succeed in Hollywood, many are willing to give it a shot.

Vistan notes a growing number of Filipinos in the industry, some from the Philippines, a lot from second-generation Pinoy families based in the US. “It’s wonderful to see so many of them making their mark in the industry,” she says.

Like other Filipinos working abroad, those in Hollywood are friendly, relying on each other for job referrals and tapping into each other’s contacts.

They also offer emotional support and a comforting semblance of home. “We both recognized each other’s accents and I awkwardly asked if she was Filipino and went to Assumption,” says De la Rosa, who first met Vistan over the phone when they were both assistants.

“We then set up a meeting at Max’s Fried Chicken because we wanted Pinoy food and we knew we could speak freely without industry ears overhearing our conversation.”

“We have friends of different nationalities and backgrounds,” Chikiamco adds. “But it’s still great having friends who understand both your culture and where you came from, and the challenges of working in this industry.”

To make your own Hollywood dream a reality, “be aware that it is extremely competitive and you have to start at the bottom and work insanely hard,” Dizon says.

“Entertainment is an apprenticeship industry, and the best way to learn it is to jump right in and try it,” De la Rosa advises.

“Opportunities will always present themselves to people who are patient and believe that things will eventually fall into place if they are driven, dedicated and possess a strong work ethic,” Vistan says.

“The spotlight on diversity in Hollywood has been growing and hopefully will only continue to grow,” Chikiamco says. “I’m hopeful there will be more opportunities in the coming years for Filipinos and other minorities to tell their stories.”