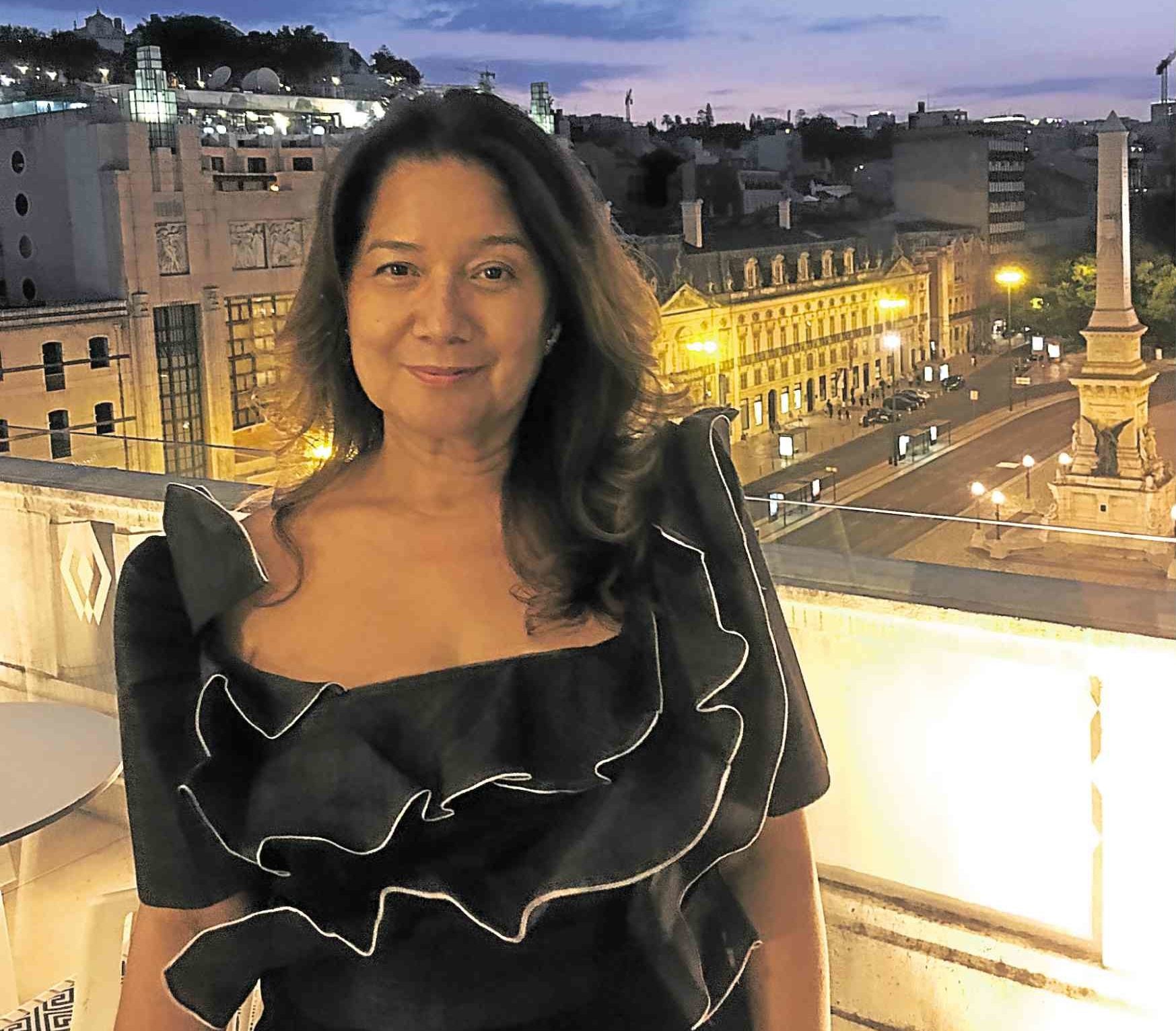 You know our woman in Lisbon, Ambassador to Portugal Celia Anna “Cookie” Feria, is anything but a stiff diplomat when she welcomes you to her turf with hardly any makeup, her hair in a messy bun. “Oh, call me Cookie,” she insists.

She reports, in the Philippine Embassy, where she has a staff of eight Filipinos and one local hire, when the local girl isn’t available, and since the staff isn’t comfortable speaking Portuguese, Feria herself answers the phone to take queries on visas. “Yes, we work very hard,” she says with a laugh.

The week we met her, a few days after Philippine Independence Day, Feria was hosting renowned Filipino pianist Raul Sunico, who gave a concert; had organized a week-long Filipino food festival at the posh Altis Avenida Hotel, a collaboration between Feria’s friend and the hotel’s executive chef Joao Correia and Filipino chef Myrna Segismundo, who was leading a team for the “Lasap Pilipino” culinary tour; and, for her main project, was working with scholars to come up with a bibliography of Filipiniana material in Portuguese archives and libraries, to trace the connection between the two countries beyond Ferdinand Magellan.

In case you don’t know, that’s the explorer who discovered the Philippines, a.k.a. local boy Fernando Magallanes, who will be in the news as Portugal begins celebrations next year of the 500th anniversary of his circumnavigation of the globe in 2021.

“I’ve already contacted the Universidade Nova de Lisboa, and they’re helping,” she says. “We’re asking Asian studies teachers to talk more about the Philippines in lectures, so we can see ourselves from the perspective of the Portuguese.”

That is, when Feria is not giving lectures herself, representing just one of three Asean embassies in the country (apart from Thailand and Indonesia).

The irony is that Portugal doesn’t even have an embassy in the Philippines, having closed it in 2007; the Philippine Embassy itself opened in Lisbon only in 2010.

“I have a lot of catching up to do!” Feria exclaims.

Almost every day, there is a diplomatic reception to attend, Feria says; “I learn from my colleagues. We also have a group of female ambassadors, and we help each other and use the association as platform to promote women’s rights. I’m able to show what we’ve done in terms of such rights in the Philippines.”

Portuguese is a difficult language, sounding quite different from Spanish, and distinguished by consonants and characteristic lilts.

It’s a language Feria learned years ago, while at her first job after graduating from the University of San Francisco with a degree in government, minor in Latin American studies.

Working for the Embassy of Brunei in Washington, D.C., in 1985, she took language lessons at the Brazilian American Cultural Institute—and watched a lot of telenovela. “Everyone was studying French, Spanish, so I thought, why not be different?” she says.

It’s been a stellar career for this diplomat, who returned to Manila after her Washington stint, joined the Department of Foreign Affairs, and served in Madrid, Rio de Janeiro, Paris, and again in Madrid; thus, Spanish rolls off her tongue just as smoothly as Portuguese.

At the belated Independence Day cocktail reception Feria hosted at Altis Avenida (with chefs Segismundo and Correia running the kitchen), she switched effortlessly between languages.

Not bad for an Assumption high school graduate who wanted to study dentistry and make money to travel the world, but opted instead for foreign service at University of the Philippines (before continuing her studies in the United States), because “I couldn’t pass Math 11 in college, so I kept shifting to find a course with no math.”

Evidently, however, Feria can easily morph from chill girlfriend to consummate diplomat.

After the Sunico concert, she dropped by the foodfest in a beautiful stylized black terno by Dennis Lustico, a favorite designer.

After her last posting in Madrid, where she was consul general and deputy chief of mission, Feria came home to Manila and served as chief of protocol for President Benigno Aquino III.

She helped welcome Pope Francis during the pontiff’s historic Manila visit in January 2015.

“He would see me and say, ‘Hola, señora.’ I think I made him feel welcome because he could speak Spanish with me.”

And what does she tell people about the country’s outspoken President Duterte?

“No president in the world does not mean well for his or her country,” she says, well, diplomatically. “That’s the way he expresses himself. They understand he’s a leader, and he means well.”

After all that, it’s hard to believe this is only Feria’s first ambassadorial post, which she assumed in 2017.

“That’s your dream in the foreign service—you take the exam, hoping to be an ambassador one day, so this is it, after 27 years. I’m still getting used to it, though.”

When she’s not working, Feria reads newspapers and magazines (in Portuguese) and walks around the city to discover streets and shops—“and tell people about it,” she adds.

A single mother, Feria is looking forward to bringing her son, Miguel (that’s Juan Miguel Augusto Feria), to Lisbon after he earns his mathematics degree from La Salle. “Maybe he will want to check out the scene here,” she muses.

Feria admits candidly how she was “probably the first foreign affairs official to declare that I was a single mom. I almost got into trouble; understand, though, this was 1992, and they had to reprimand me for ‘indecent and immoral conduct unbecoming of a foreign service official.’ That’s exactly what the letter said, and I was asked to explain in 10 days why they shouldn’t file administrative charges against me.”

Eventually, though, the Solo Parent Act was passed, so things turned out for the best for this single mom. She’s hoping to be home in December, for her 40th-year Assumption velada.

Feria serves a small community of around 2,000 Filipinos in Portugal, most of them in the service sector, and who are generally happy to be in this welcoming European country.

“Like us, the Portuguese are very hospitable—and not in a condescending way. They like to make friends with foreigners, want to make a good impression, and they’re family-oriented. There are so many opportunities for Portuguese-Philippine relations to prosper; we just have to get to know each other more. We know more about them than they do about us. I hope we can change that.”