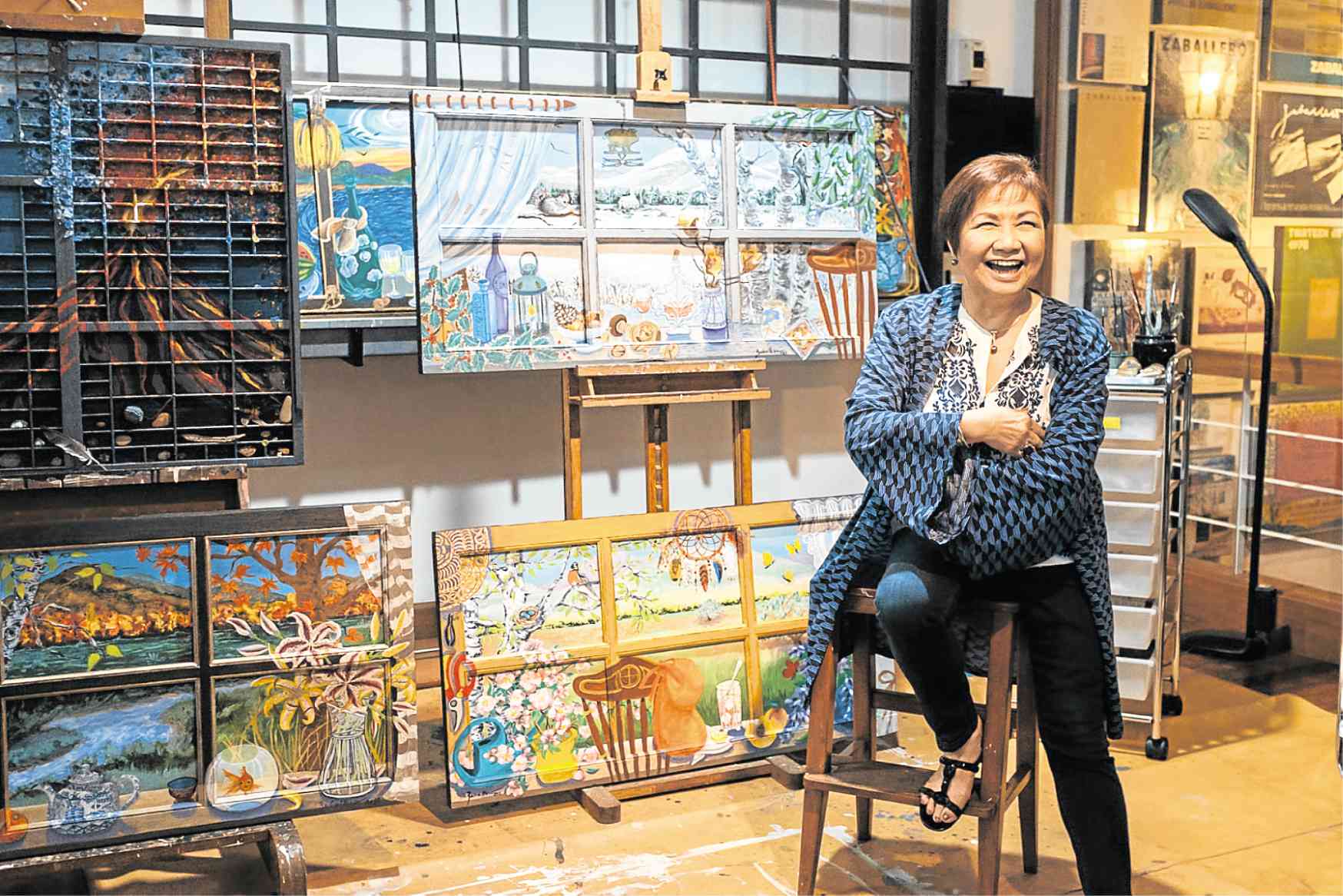 Zaballero in her studio with her “windowscapes,” colorful figurative paintings on antique windows —ALEXIS CORPUZ

Yet here it is, in full widescreen color.

“Windows Within Windows XV: At End of Day,” one of the centerpieces of Zaballero’s upcoming exhibit which opens Sept. 20 at Altro Mondo Arte Contemporanea gallery is, without a doubt, a depiction of that most clichéd of subjects.

But what a sunset…

One hundred and two inches wide, the painting incorporates two full-width antique windows through which one views a panoramic sunset resplendent over the sea.

The painting is filled with the artist’s signature touches: a glass of halo-halo, a ripe watermelon, a dreamcatcher. Right in the middle, a fat gray cat looks out to sea. Top left, a moonrise waits in the wings.

The windowscape evokes nothing so much as a sense of the fullness of life.

“Since I always paint things that I know personally, I always own the result,” says the artist.

This exhibit is a kind of homage to her past, she says, and to her creator.

“It’s no longer corny, because it’s a challenge,” she adds.

Zaballero even named the exhibit “Looking Back With Love,” which sort of shows how past caring she is about sounding corny or not.

Having first made a name for herself as an abstractionist, Zaballero has developed, counter-intuitively, toward figurative painting.

“I moved from abstraction to representation,” she says. “After a while, I found abstraction limiting already. Color, line—hanggang doon na lang ako, and I had a lot more I wanted to say. But because of my training with [Roberto] Chabet at UP, I didn’t want to be too obvious.”

We are previewing the works at the artist’s “new” studio, although, in truth, she moved in four years ago when traffic made the daily commute from her Quezon City home to her “old” studio in the North Syquia Apartments intolerable.

“I had to say goodbye to my community of 21 years,” she laments.

It’s probably just as well; The Malate bohemia of the 1980s-’90s is long gone, archived only in the artist’s memory.

Like Jack Kerouac, whom a fellow writer once called “the great rememberer,” Zaballero mines her memory for inspiration. She spent her childhood in the US, her adolescence in Europe and her adulthood in the Philippines during the social and artistic ferment of the 1970s and early 1980s. It is a particularly rich vein for making art.

Time traveling through six decades, she revisits many of these places in “Looking Back With Love”: Vermont, Boston, New York, Madrid, Barcelona, Guimaras.

The Italian filmmaker Federico Fellini said, “All art is autobiographical. The pearl is the oyster’s autobiography.”

Zaballero’s paintings are her pearls.

It probably helps that she spent much of her early life traveling: Taking snapshots and collecting souvenirs are second nature to her. These eventually serve as aides-memoire when she gets the urge to paint.

It also doesn’t hurt that she is something of a pack-rat, keeping everything that catches her eye: river stones, leaves (who keeps leaves?), dead insects, pieces of glass, discarded windows, obsolete typesetter’s trays from an old printing house, a treasure trove of found objects that turn up in her art.

Finally, the artist has an obsessive-compulsive streak that serves her art in good stead. Every painting is meticulously planned out, thought through, and documented.

Zaballero has even devised an archiving system, complete with index cards, sketchbooks and computer records, which follows every work from inception to sale.

“It liberates my mind so when I’m working, I don’t hesitate so much,” she explains her method. “I’ve worked it out already, so there are no more doubts. Specially when I was doing abstracts and throwing paint on the canvas, the hesitation shows, it doesn’t look fluid.”

Zaballero was the classic late bloomer.

Born in 1942, she spent much of her early life traveling with her well-to-do but very conservative parents in the US and Europe, and being educated in strict Catholic schools.

With the death of her father in 1960, she found herself back in the Philippines.

“By the time I came home, I was going into third year college,” she recalls. “I said I wanted to enroll at UP, nowhere else.”

She wanted to study journalism, but her mother prevailed upon her to take the more “practical” course of Economics.

“I hated every moment,” she recalls. “I was super unhappy.”

As soon as she graduated, she married banker Tito Zaballero and had three sons in quick succession.

For the next 10 years, she worked in the family business, raised a family and played the dutiful housewife, all the while suffering a gnawing discontent.

“I did everything creative you could imagine,” she recalls. “I sewed my own clothes, I did my garden. Finally it dawned on me that the reason I was unhappy was, I really wanted to be an artist.”

During her last years in Europe, Zaballero had come to know a few starving artists in Paris, and was fascinated by the creative life. She even tried to talk her parents into enrolling her in art school in Aix-en-Provence, but no dice.

The dream never died, however, and when her children were grown, Zaballero found herself returning to UP, this time to the College of Fine Arts.

“At 32, you’re like an old woman,” she recalls. “Your classmates are 17, 18. I didn’t have to do the general education subjects, but it still took me four years.”

It was time well spent. She came under the mentorship of Roberto Chabet, who inculcated in her a rigorous approach to art-making. He also introduced her to the redoubtable Ray Albano, who basically ran the Cultural Center of the Philippines’ visual arts program in the 1970s.

“At that time there was no other place but the CCP,” she recalls. “I was launched right away.”

After being chosen to be one of the CCP’s Thirteen Artists for 1978, Zaballero had her first solo exhibit. For the next five years, she became one of the leading abstract painters in the country.

Days after Ninoy Aquino was assassinated, however, Zaballero was moved to paint the senator’s corpse spread-eagled on the tarmac. Titled “August 21, 1983,” the painting was promptly banned from exhibition by the regime. It was eventually sold and the proceeds donated to the Justice for Aquino, Justice for All movement.

“It was the first time I had done, for public consumption, a figure, a representation,” she recalls.

Having reached the limits of abstraction, her art evolved slowly back to figuration. After all, there was nothing abstract about the protests that followed Aquino’s death, and the inevitable repression that it was met with.

“I don’t do people, they always want to look better than they are,” she laughs. “Me, I don’t care how I look.”

Every 10 years or so, in between working on her exhibits, Zaballero paints a self-portrait. Done in a kind of symbolist style quite distinct from her other work, it is a way of taking stock of where she is spiritually at that point in her life, part of a visual diary.

“I don’t show them, but they’re good for my soul,” she says.

It’s ironic, but Zaballero’s work is somehow freer now that she’s doing representation than when she was doing abstraction.

“The horizons have opened up,” she says. “You can do anything now. Also, I don’t care anymore.”