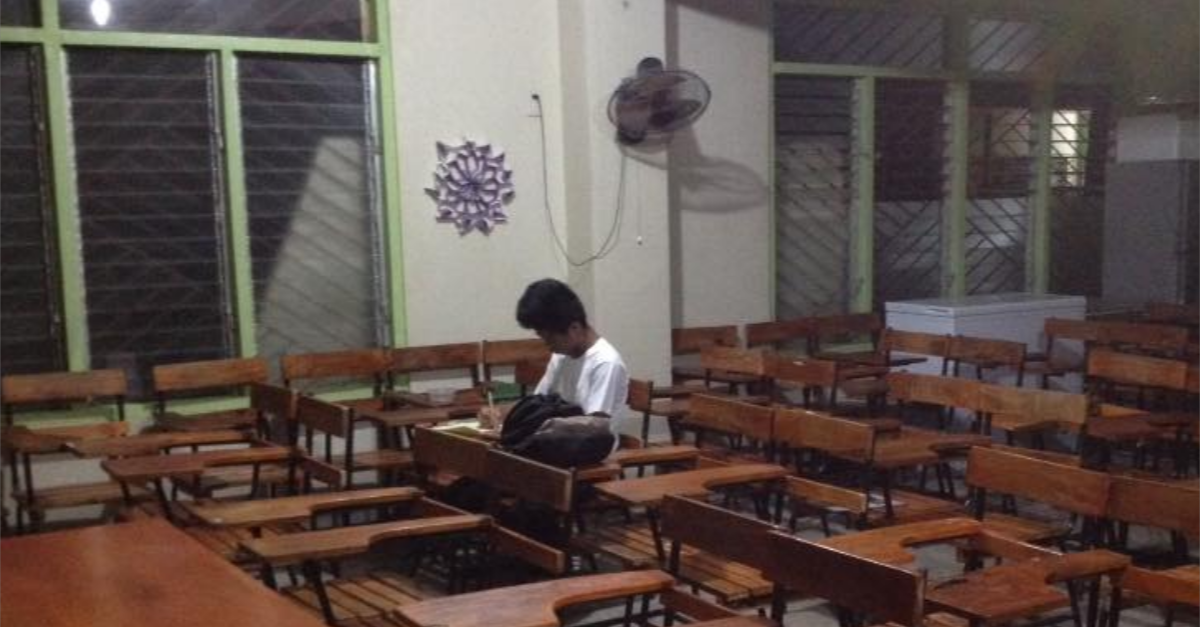 Typhoon “Ompong” brought about widespread class suspensions in numerous parts of Luzon. In Atimonan, Quezon province, however, one student chose to finish his school work within the confines of his classroom rather than do so in the safety of his home.

It was 7:30 p.m. when senior high school teacher Mark Ortil Pornasdoro of Malusak National High School went back to double check his classroom last Thursday, Sept. 13, in preparation for the then-coming typhoon Ompong. He was surprised to see his student in English, Jeric Reyes, finishing the school work that he was not able to pass at 5 p.m.

(I already told him ahead, before the cancellation of classes was announced, that he is allowed to pass his school work tomorrow. But here he was, surprising me.)

(I told him he should stop, that it’s okay. I said he must be hungry and should eat. He told me, “There are only a few items left, sir.” He told me he’ll eat later. As if he’s already friends with hunger. As if he’s used to bearing these things.)

(His house is located here in Brgy. Malusak as well. They have no electricity. They only use a gas lamp. That’s why he makes the most of this blessing of electric lights. Nevermind if he gets home late, nevermind if he goes hungry. If only to study. If only to learn. Honorable.)

(Because despite the poor state of this society, made worse by those who are greedy for power, this kind of diligence and fairness, especially by those who are poor, are the threads that bind [and lead to] action.)

In a separate post, Pornasdoro uploaded a photo of Reyes reading the comments netizens left on Pornasdoro’s post. He clarified that his post was neither a diversionary tactic nor a means to become popular — rather, his post’s message is faith in humanity, that there is hope.

(The personal joys one has in the midst of other people’s suffering are mere illusions. It is very hard to be happy when we see others suffering.)

He stated that appreciating one’s blessings, particularly because the said blessings come from the sacrifices and hard work of the generations before, is one thing everyone can do to help the Philippines, no matter how small it may seem.

(Strive. Because we are not only hoping for ourselves; because this is not an issue only of one’s mortality. This is about the hope we can contribute to the nation.) JB

Kelsey Merritt asserts being Filipino in debate on race, color in modeling industry